In a recorded Zoom call leaked on Twitter Oct. 10, BC Liberal candidate Jane Thornthwaite made sexist jokes about NDP candidate Bowinn Ma. As a young, politically-engaged woman watching the video, I rolled my eyes. Thornthwaite accuses Ma, B.C.’s youngest MLA, of “cuddling” up to far older BC Liberal Ralph Sultan, and distracting him.

After a storm of criticism, Thornthwaite apologized. I continue to find her comments troubling, however, because of what they say about politics in B.C. as an old boys club. Of the eight other BC Liberals on the call, all of them white and most of them former or current MLAs, only one was a woman, Karin Kirkpatrick, a candidate for West Vancouver-Capilano.*

The rest were men and they laughed with apparent ease as Thornthwaite said Ma was a “pretty lady” who at a public event used her youthfulness and “it” factor and “cleavage” to disarm a male colleague.

Ma has pointed out that she sat close to Sultan that day because he is hard of hearing, and others have noted that she and Sultan share respect and camaraderie due to their shared engineering backgrounds. Thornthwaite, though, saw a chance to denigrate Ma and pass it off as a joke while “roasting” Sultan.

Thornthwaite may be 62-years-old, but sadly the idea that women use their sexuality to get ahead is not fading away. Even among my generation, it contributes to an atmosphere where sexual harassment against women is seen as more tolerable. I have unfortunately experienced this firsthand. Young men have offered me networking, contacts and opportunities — if I continue to date them. I’ve also been invited to network over coffee, dinner or drinks, only to find myself conversing with someone that is clearly only interested in dating me.

These experiences have made me feel my merits alone are not good enough and wonder what obstacles lie ahead on the career path I’ve chosen.

My mother jokes that I have been involved in politics since before I was born. When she was pregnant with me, she went to protests. So maybe it’s her fault I’m so invested in politics, and so unafraid to call out politicians or people in power as a journalist.

When I was 15, I went to the Seminar on the United Nations and International Affairs — essentially, a summer camp for nerds. After the week of hiking and reading about the Syrian war was concluded, a boy told me that all of the camp boys had voted. I was declared the hottest girl at camp.

Research by Lawless and Fox shows that girls at the junior high level already see themselves as less politically competent than their male peers. Later on in their careers, women are less likely than men to run for office, to be encouraged to run and to feel they’re qualified to run. As kids, girls don’t have the confidence gap, but they are less likely to be encouraged by their parents to go into politics or consume political media.

Knowing this, it’s no surprise that we have yet to reach gender equality in B.C. politics. Before the election, only 39 per cent of B.C.’s MLAs were women. Statistics on the race of MLAs are not even collected. Before prorogued, Canada’s House of Commons was 29 per cent women, placing it at an embarrassing 57th worldwide for gender equality in Parliament.

Regardless of who is in the formal seats of power in Ottawa or Victoria, Canadians are not accustomed to seeing women in power, and especially not Asian women or women of colour. What we fail to remember, however, is that before Canada was created on these stolen lands, white men were not making all the decisions. This alone is proof that the settler-colonial and paternalistic culture surrounding our politics can change.

But for the old boys club culture to change, women and men in politics need to interrogate how we've internalized patriarchy and colonial norms around who gets ahead and how. Women like Thornthwaite would do well to focus on dismantling these norms within their parties, not directly perpetuating them under the guise of humour.

Our media has a massive part to play in centring white men and white male perspectives. Last week, H+K Strategies noted the most popular B.C. political journalists on Twitter. The top five are white men, and almost everyone in the top 10 is white.* British Columbians should seek out some amazing women of colour journalists like Angela Sterritt, Bhinder Sajan, Brishti Basu and Andrea Woo.

My friend and fellow Martlet writer Alec Lazenby is keenly aware of his male privilege in our circles. Alec and I initially bonded over our mutual nerdy love for B.C. politics and quickly started collaborating on Martlet stories. But Alec saw sexism happening and he noticed how men, in professional contexts, were giving him more opportunities and passing me by. We had conversations about this and Alec started opening more doors for me. We need more men like Alec. 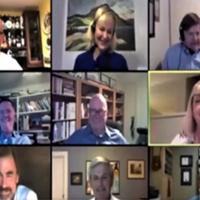 We also need women who, unlike Thornthwaite, get it. I’ve had women call me cute, sweetie, or simply remark that I wouldn’t understand politics. I’ve had women as well as men pass me up for opportunities, only to give that same opportunity to a man with equal or less experience.

This old boys club culture provides an unfair advantage to straight and wealthy white men, and some women who achieve standing in that world mistakenly perpetuate it. Simply electing more women, therefore, is not going to change the old boys club culture. Encouraging more women to run won’t fix it, either. Instead, all of us, of all genders, sexualities and ages, need to interrogate how we've internalized harmful norms about what it means to be a leader in politics and how to get ahead in politics.

Preserving old boys club culture isn’t funny. Regardless of who is making the jokes or who they are directed towards, it’s not a laughing matter.