When the Edmonton-based Coal Association of Canada lobbies Alberta’s UCP government — as the official registry shows happens a lot — elected ministers not only listen, but act promptly.

Consider, for example, the run-up to the Jason Kenney government’s decision to sweep away protections that had stood for 44 years to safeguard a 1.5-million-hectare area of the eastern Rockies vital for wildlife and safe drinking water for Albertans.

The protective Coal Policy implemented in 1976 by then Progressive Conservative premier Peter Lougheed was quietly trashed in May by the Kenney government, as the pandemic and plummeting oil prices upended its oilsands-driven economic agenda. (See this article published today in The Tyee.)

Plan B? Coal, apparently. And in Alberta coal lobbyists have some clear advantages that ordinary citizens don’t.

For starters, CAC president Robin Campbell used to be a Tory finance and environment minister in the Alberta government of Jim Prentice. He knows his way around government.

Riese O’Hara, CAC’s director of government relations, also worked in a Tory government as chief of staff for the provincial transportation minister about five years ago.

In September 2019, for example, Campbell met with the new Environment Minister Jason Nixon to discuss “economic opportunities for the Province of Alberta as a result of proposed coal mining activity, primarily in the Eastern Slopes of Alberta.”

The Coal Policy, which prohibited open-pit mining on those lands, was most likely discussed.

On Jan. 30, 2020 Campbell continued the conversation, this time with idea of pitching the development of metallurgical coal development as a great economic diversification opportunity in a province already crippled by its dependence on fossil fuel exports.

In March, Environment Minister Nixon abruptly announced that the UCP government planned to fully or partially close 20 provincial parks and hand off another 164 to third-party managers supposedly to save $5 million. There was no public consultation.

About one-third of the closures lay in coal-bearing lands along the Rockies’ eastern slopes and, as subsequent events suggest, that is probably not a coincidence.

On April 30, Campbell lobbied Nixon again but this time via teleconference due to the pandemic.

This go-around, Campbell championed economic opportunities offered by the coal industry in Alberta. Other subjects came up including “the 1976 coal policy and existing land-use planning.”

The CAC, the only association consulted about the axing of the Coal Policy, responded in kind. 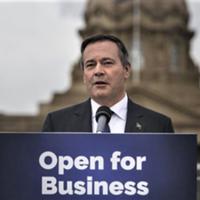 “Government is placing a strong focus on creating the necessary conditions for the growth of export coal production,” said the CAC in a statement. “The rescinding of the outdated 1976 Coal Policy is a step in the right direction from the Government of Alberta.”

According to Alberta’s lobbyist registry, the CAC has a lot more heavy work to do.

CAC “will continue engagement with Ministry of Environment and Parks to advocate for land-use planning that does not strand Alberta’s coal assets, both existing projects and potential projects in the Eastern Slopes, primarily.”

The organization “will discuss the implications of rescinding of the 1976 Coal Policy with the Minister and Deputy Ministers of Energy. Discussion will focus on the economic opportunity of Alberta's coal deposits, both for domestic use and export.”

In all of this lobbying, the words water and climate change are never mentioned.