Over 400,000 Canadians, says the government, are directly affected by Alzheimer’s disease and other dementias. That number could be doubled or even tripled to include the family members engaged in caregiving. They are involuntary experts on a major public health issue that affects every one of us.

And when you think about it, it’s a remarkable aspect of our culture that we relegate so much of the care for dementia patients to their friends and relatives rather than to professionals. We wouldn’t do it for a person with cancer or kidney failure. Yet when a parent or partner is diagnosed with a dementia, much of the person’s care depends on the ability of relatives to provide it.

A couple of recent books show what a challenge that presents to caregivers — even to people trained to deal with it. And they also show caregivers can find unexpected resources, both in themselves and also those they care for.

A case in point: Neither Married Nor Single: When Your Partner has Alzheimer’s or Other Dementia, by Dr. David Kirkpatrick.

Kirkpatrick is a retired West Vancouver geriatric psychiatrist who was married to Clair Hawes, a clinical psychologist. It was a second marriage for both of them; each had lost a spouse. Both were professional caregivers, educated, active and highly intelligent.

Clair’s odd lapses in memory led to an Alzheimer’s diagnosis in 2007. As Kirkpatrick describes it, Clair’s failing memory turned from a quirk to a sometimes terrifying challenge.

Some nights, Clair would turn over in bed, look at him, and ask: “Who are you?” She began to call 911, complaining about a stranger in her house — her own husband. She became emotionally “labile” — a medical term for unstable — and swung unpredictably from rage to smiles and back again.

‘I was totally unaware’

Kirkpatrick was clearly very much in love with his wife, and such behaviour appalled him. Even with all he knew about her condition, he was often staggered and frightened by her behaviour.

But he was also professional enough to track and record that behaviour as well as his own responses. And he found great help from his dementia support group, where others in his situation could share their experiences.

Even so, he failed to recognize how the stress of caregiving — even after his wife was in a care home — was harming his own health. He began to sleepwalk. His psychiatric patients told him he didn’t seem to be all there, and he found he had no memory of the notes he’d taken during their sessions.

Finally, his adult son and a friend hauled him off to Vancouver General Hospital. “I had no idea why they were so concerned about me because I was totally unaware of the absent, drooling spell they had been witnessing,” he said.

Eleven days later, Kirkpatrick came home with a diagnosis of “multiple neurological disorders including temporal lobe epilepsy combined with sleep apnea.” He was forgetting to breathe in his sleep.

Life improved as he began to care for himself. He sold his car and took the bus from West Vancouver to Phibbs Exchange in North Vancouver, and then walked the considerable distance to Clair’s care home on Mount Seymour Parkway.

With his own therapist, Kirkpatrick worked on his own unresolved problems and learned to live more in the moment — which helped him make the most of his time with Clair as she drifted away from him. She might be forgetting him, but he couldn’t forget her.

He savoured the laughter they could still share, and the simple pleasure of cuddling together. He was learning to love his wife as she was, rather than as she had been, and to live in the moment with her.

Apart from his own disarmingly frank account of his relationship with Clair, Kirkpatrick also offers a concise survey of Alzheimer’s and other dementias and when we can hope for a means of stopping or reversing their effects: “The answer coming from researchers is, ‘Soon…we hope.’”

A dramatically different account of caregiving comes from Canadian singer and writer Jann Arden in her memoir Feeding My Mother: Comfort and Laughter in the Kitchen as My Mom Lives With Memory Loss.

Like Kirkpatrick, Arden uses a diary format to tell the story from 2014 to 2017 of her parents’ slide into dementia. Living within a few feet of their home outside Calgary, she had been looking after her father and mother for some time.

Arden starts with the return of her father from a hospital stay in 2014 after an unknown infection (combined with type 2 diabetes and kidney problems) seemed to have triggered dementia. It’s unclear when her mother developed it.

Arden vividly describes a couple nearing the end of a long, turbulent marriage, made complicated by losing things. “I loathe watching them misplace every single thing: keys and purses and credit cards and coats and money and electric bills and coffee mugs and glasses and the TV remote” — which on one occasion was retrieved from the dog food.

Her mother blames the losses on “the movers.” Arden how she says, “The movers move things… Either that or your dad and I are going crazy. At least we’re doing it together.”

Arden marvels, “They never get mad at each other… The funny part of it all is that they aren’t the least bit concerned. They don’t seem scared at all. They are light-hearted and positive and faithful and easygoing. I am the only one freaking out.”

Sometimes her parents pause and seem to recover ground. Nothing goes missing, and they come to her house for dinner looking “relieved to NOT have to worry about what to make themselves.” Arden shares the recipes for many such meals, and the food looks delicious.

Then everything goes wrong: her father has a heart attack while Arden is on a long tour and he must stay in hospital while a caregiver looks after her mother. When Arden returns, her mother is bereft, “sobbing into her tiny hands.”

A little later, she writes, “I told Mom this morning that I was so sorry that she was sad and that I wished I could do more. She looked up at me and said, ‘Sad? What was I sad about?’”

Arden is keenly perceptive about what is happening to her mother. “Her mind is busy trying to hide its problems. The mind is so tricky. It constantly re-configures, rewires, reroutes, trying to protect itself from what it knows.”

The same could be said for the caregiver’s mind. The caregiver must reconsider a profound relationship dating back half a century or more, becoming a parent to a parent or a spouse. Kirkpatrick and Arden must redefine themselves and the people who mean the most to them. 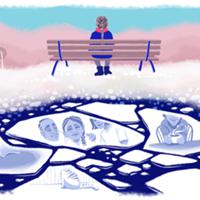 Taking on the Public Health Issue of Dementia

After years of close communication and shared experience, they now look after someone who can respond with no more than an occasional good day, or a smile, or a witty response that brings back memories of lost laughter.

Yet as both writers make clear, this is a price worth paying. As they rage against the dying of the light, they see and understand themselves more clearly than they ever have before.

Kirkpatrick describes this transformation in clear, honest text and sound professional advice. Arden writes well, adding recipes and photographs — not only of herself and her parents, but of their homes and the beautiful Alberta terrain they live in. She understands that our food and our land are as much a part of us as our failing brains and the brains of those who care for us.

The literature of dementia is full of books offering consolation and joy for caregivers. David Kirkpatrick and Jann Arden show that such books give advice that will help both the caregivers’ parents and partners, and the caregivers themselves. They remind us all that, at whatever age we may be, we have much to learn about who we are.