It may come as a surprise that the only municipality in Metro Vancouver without a city-wide plan is the City of Vancouver itself. The city enjoys the exemption through its charter from the province, which gives it greater leeway than other municipalities to side-step making such a plan. 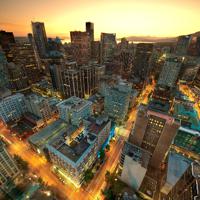 Density Is Coming, Say Urban Thinkers, but to Whose Backyard?

But maybe it should anyway.

That was the topic at the fourth in the series of City Debates hosted by Urbanarium, a non-profit group of academics, city planners and citizens, in partnership with the University of British Columbia's School of Architecture and Landscape Architecture. Each debate pits two teams of urban experts against each another to change the minds of audience members on some hot idea in Metro's civic conversation.

Debate moderator David Beers, co-founder and founding editor of The Tyee, cautioned the audience that this debate might be "a little more nerdy" than earlier ones -- tackling subjects like zoning and community amendments -- but that the reward would be "a quick seminar in how power flows, how decisions get made, and how deals get done which affect the look, the feel, and the nature of Vancouver."

On the "pro" side of the debate, for a city-wide plan, were Councillor Adrienne Carr of the Green Party of Vancouver and Patrick Condon, chair of the masters of urban design program at UBC SALA. Against a city-wide plan on the con side of the debate, were Vision Vancouver Councillor Geoff Meggs and Gordon Price, director of the City Program at Simon Fraser University and a former city councillor.

At the start of the evening the audience voted more than two-to-one -- 121 to 57 -- in support of a city-wide plan for Vancouver. Following the Oxford debating style, the side that was able to sway the most audience members in a second vote at the end of the night would be deemed the winners.

Case for a city-wide plan

UBC's Condon opened with strong support for a city-wide plan, also known as an official community plan, and strong words for those against one. "I think anyone who is opposed to the idea of a city-wide plan is taking complete leave of their senses," he said.

Condon argued that the lack of a city-wide plan makes it hard to allocate density. Most residents don't have a problem with swathes of downtown being zoned as dense "comprehensive development districts" (CDD), he said. The problem arises when CDDs appear outside the downtown core in neighbourhoods of mostly single-family houses.

This is what many call "spot zoning," applied on an as-you-go basis. City-wide plans, by contrast, usually dictate where cities consider their priorities for growth -- and where their money should go. Vancouver's lack of a plan has largely left that up to developers to decide. They choose where to build, then have it rezoned by offering the city revenue and amenities in exchange. The rezoning often permits higher density that many feel is out of place in its area.

Condon cited isolated parcels near single-family areas receiving the same zoning as the former Expo lands. "To the logical mind," he said, "it's not a 'district.'"

And letting developers trade amenities for rezoning in private agreements with the city is a problem in itself, Condon said. Such "spot" zoning is prohibited in many parts of North America, precisely because it lacks transparency and appears open to influence.

But while Vancouver doesn't have a city plan, about one-third of it does have local area plans -- in neighborhoods like the West End, Mount Pleasant, Marpole, and the Downtown Eastside.

Condon's teammate, Coun. Carr, said these create a "hodge-podge" alongside other urban growth plans, and confuse what should take priority.

NEXT IN URBANARIUM CITY DEBATES?

Should citizens be more empowered to decide what gets built and where in Vancouver? Or is the process already too prone to public pressures, stifling the creativity, knowhow and vision that professional planners are hired to provide?

Get your tickets here -- they sell out within days.

'The way it works'

Setting up the case against a plan, Coun. Meggs began by emphasizing that his position didn't mean he was against considering the city's goals as a whole.

"No one in their right mind is against city-wide thinking, and no one can seriously oppose planning," he said, "but the idea of a city-wide plan, particularly at this time in our city's life, is not right. It's wrong. It's not serious, it's a dangerous fantasy."

Meggs argued that adopting a city-wide plan now would waste the work invested to develop those existing neighbourhood and regional plans, such as the city's Transportation 2040 Plan, the Metro 2040 regional growth strategy with other municipalities, and risk losing federal money for rapid transit based on current ridership.

Meggs' debating partner, former councillor Price, asserted that the character of a city-wide plan can lie in separate local plans. Rather than negotiating the needs of residents on a city-level, he thinks it's better to do that area by area.

"That's how it works. That's a living, organic city," said Price. "That's change accommodated in the neighbourhood, at the level where people understand it. And yes, it can be tough, but it's the way it works for us. That's what we've all been in this city. We don't go for the big overall views.

"If you're going to change that to pursue the ideal of some city-wide plan, you're in some 'all or none' game. All communities must be rezoned. All must accommodate growth and change, or none, because how else could it be fair?"

As the debate opened up into exchanges between the sides, the topic turned to the citizen's role in planning.

"If we can engage in a city-wide planning process, I think we could do it in a collaborative way," said Carr, challenging Price. "It's not top-down. Let's engage, let's get the plan done, and see how we can have continued engagement so that citizens don't feel disconnected from city hall."

But her opponents saw limits to citizen input.

"Consultation is essential, but it is not the right to veto," Price said. "You [ordinary citizens] don't get to make the decision. Why? Because you didn't get elected."

Price argued that it is the responsibility of politicians to be accountable not only to those who make their voices heard, but also to residents who didn't speak up, and to those of the future. "Responsibility to the future: isn't that what planning is for?" he asked.

It was an apt setup for the next Urbanarium debate, which will debate whether city planning is too important to leave to the experts.

That idea might take support from the outcome of this latest installment. When the audience voted again at the end of the evening, backing for a city-wide Vancouver plan had held at 122 votes. But now 80 votes supported leaving the "hodge-podge" as it is.

In the words of Price, whose team swayed the most votes: "The tools we've developed over 30 years still work well for us." An assertion at least a few Vancouverites in and outside the hall might still find worth debating.

NEXT IN URBANARIUM CITY DEBATES?

Should citizens be more empowered to decide what gets built and where in Vancouver? Or is the process already too prone to public pressures, stifling the creativity, knowhow and vision that professional planners are hired to provide?

Get your tickets here -- they sell out within days.