John Horgan’s NDP government won’t say it officially, but a recent article published in newspapers and online media across the province makes it obvious he’s given the forest industry the green light to liquidate much of the remaining old-growth timber in B.C. and cash in on current high lumber prices.

The article, “A Strategy for B.C. Forests that Benefits All British Columbians,” claims less than one per cent of the timber left in the province is logged annually and only one-quarter of that is considered old growth.

And who are the authors of this claim that contradicts the clearcuts we see with our own eyes every time we drive or fly across B.C.?

Why it’s Jeff Bromley, long-time member of the IWA and now a United Steelworkers’ union staffer and chair of its wood council, and Susan Yurkovich, president and CEO of the BC Council of Forest Industries.

Gee, I wonder if this pair might be a bit biased?

Instead of making such an incredible claim himself, Horgan relies on industry and union representatives to make the claim for him, even though they stand to profit the most from the destruction of B.C.’s old-growth forests.

It could be a winner for the government, given record high lumber prices — almost three times higher than a year ago —and the millions in stumpage revenue pouring into the government’s coffers. Call it green gold with the companies and unions cashing in along with the government.

So, it’s happy days in the forest sector. But not for those who care about B.C.’s rapidly disappearing old-growth forests, which some experts claim to be less than five per cent of their former domain. For them, what’s happening to our ancient forests is nothing less than a tragedy for the natural environment and all its creatures, including humans.

But who cares about the environment when there’s money to be made?

The Horgan government doesn’t, though they try to make us think otherwise. You can trace this back to eight months ago, when, with much fanfare, the government released its “strategic review” on managing old-growth forests.

Entitled “A New Future for Old Forests,” the review’s authors stated emphatically that society is undergoing a “paradigm shift” in its relationship with the environment and the government needs to consider this in terms of how it manages our ancient forests.

The authors, both professional foresters, said there is a “widespread lack of confidence” in the government’s system of managing the forests of B.C. and advise it to engage more with Indigenous leaders, local communities and forest stakeholders. 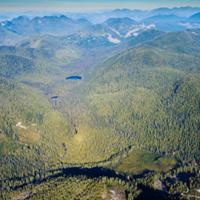 The government announced a “deferral” of old-growth logging within more than 350,000 hectares while it worked on a response to the report. Forest Minister Doug Donaldson said the government accepted the need for a new approach to forest management.

But it’s May, and there is no sign of the new approach.

Forest Minister Katrine Conroy said in the legislature recently the government was dedicated to more “holistic approaches” to old growth and ecosystem protection but needs more time. Horgan has been missing in action on the old-growth issue and the need for a “paradigm shift.”

Meanwhile, people in many B.C. communities have seen a great increase in logging truck traffic in recent months. Those trucks are feeding an insatiable demand for lumber in the U.S. housing market. And we’re stripping B.C. bare to provide it.

And this brings us back to Horgan, whose old-growth “strategy” is pretty obvious. Get in bed with the province’s lumber barons and forestry unions and use the government’s best spin doctors to placate any public concern. It’s called “talk and log,” and that’s the way it has always been in B.C.

Meanwhile clearcutting will continue from the Kootenays to Vancouver Island, and the green, forested hillsides that B.C. was once famous for will increasingly be covered with eroding logging roads, stumps and rotting timber slash.

It’s a cynical strategy, but it seems to work. However, as old growth disappears over the next decade or so, Horgan should keep in mind his legacy as the premier who took the “beautiful” out of Beautiful B.C.