The disheartening spectacle occurring south of the border (and I am not talking about the careful ballot counting) announces a betrayal of America by its elites combined with a profound denial of reality during the twilight of an empire.

On one side of the Great Divide stand the professional class, or the so-called urban liberal elites. They include the Obamas, the Clintons and Joe Biden, a candidate so bereft of ideas it is shocking.

Biden, and the rich folks who made his candidacy possible, have a string of failures hanging from their suits: the 2008 financial bailout, the systemic racism of the drug wars (jailed young Black people), unequal trade deals, the digerati power grab and growing economic inequality.

And like most elites, they take no accountability for their failures. (We truly live in the age of elite infallibility.)

Yet these same elites, who have screwed ordinary people over and over again, now argue that the only possible opposition to their rational rule are “racist bigots with guns driving around in pickup trucks.” Or at least that’s how the perceptive political analyst Thomas Frank recently put it.

And then you have the other side of the Great Divide: Donald Trump, a right-wing demagogue armed with promises of overturning the elites and restoring greatness.

But he’s really a billionaire narcissist masquerading as a populist. He’s also a direct and pointed symptom of the failure of liberal elites to address the many real problems undermining the United States.

Trump’s more unhinged followers have come to fear that the liberal elites are closet members of a giant pedophile ring that also wants to turn the U.S. into a socialist swamp. That’s what happens when those who are well-off and well-placed dismiss half the population as “deplorables” and ignore their legitimate grievances and anger.

In its current demented state, a once-proud republic has reduced its presidential choices to a gas bag and a bagman. A hangman might well be next.

Now before you recline deeper in your chair and smugly thank God you are living in Canada, let’s have an impolite talk: Canada suffers from a similarly eroding discourse as well as an epidemic of bad political leadership.

Like their U.S. counterparts, our political leaders mostly behave like medieval cardinals who think selling indulgences to the rich or corporations passes as normal if not enlightened behaviour in these coarse times.

Let me give me you three examples: Jason Kenney, John Horgan, Justin Trudeau. One Conservative. One New Democrat. And one Liberal.

Despite their superficial party differences, they all look and sound like three desperate used car salesmen endlessly trying to cajole us into last year’s model. They won’t tell you that Canada can’t remain a soulless mining republic (yes, that’s the Canada we all deny being part of).

A few illustrations are in order.

Jason Kenney, an Oakville boy (he’s no Albertan) wants to excavate the Rocky Mountains for metallurgical coal, and charge Aussie speculators just a one-per-cent royalty for destroying a watershed supplying clean water for millions of Canadians.

And Justin Trudeau believes the federal funding of an uneconomic bitumen pipeline to the port of Vancouver will help him appease an aggressive Chinese regime, secure new trade deals and yes, fight climate change.

Now here’s what these panjandrums all have in common, besides a first name beginning with J as in Joker: they don’t like transparency; they have trouble seeing colour; they serve the global casino based on endless trade and growth; they admire power more than principle; they offer political agendas but no real vision; they believe volatile fossil fuels will fund their ambitions; and when all else fails, they claim Big T technology, whether it is some version of carbon capture or Artificial Intelligence, will ensure our collective resurrection after this pandemic.

There is another thing all three politicians share: they don’t have a damn clue about the dire state of things.

Here’s just a partial list of what they are avoiding or denying.

First and foremost, business as usual is over. Globalization, a dissipative structure, is failing, and re-localizing food and medical necessities must be a political priority.

Second, the obscene gap between rich and poor will ensure decades of bloody resistance if this ruinous cycle is not corrected with big taxes on wealth and consumption.

Third, technology has begun a blunt conquest of human society. Its digital matrix now dominates modern life as totally as the corrupt presence of the Catholic Church in the calamitous 14th century.

Fourth, the volatility of fossil fuels combined with unmanageable debt ensures slow growth or no economic growth in the future.

Fifth, there can be no energy transition without a decline in living standards and dramatic drop in energy consumption, which means a very different economy. And no such thing as clean energy exists: the spending of any energy has an ecological and moral cost.

Sixth, climate chaos will show the current mild pandemic to be but a simple test of our political and social robustness.

Seventh, the decline of the United States has emboldened a totalitarian Chinese empire and that does not augur well for the future.

All of these trends have been accelerated or amplified by the pandemic. In short, we have entered a Long Emergency.

And what has been the political response in Canada?

The three Js act as though they attend the same dysfunctional Church of Holy Denial: they pray for economic growth, worship technology, kneel before corporations, give alms to the rich and spout clichés like a line of Jesus coffee mugs.

Take Jason Kenney, for starters. He has spent most of his life furthering the political career of a certain Jason Kenney.

One of his first acts as Alberta’s premier was to lower taxes for the rich. (He’s just introduced legislation that allows the rich to basically buy more elections.) He has also picked a high-profile fight with doctors during a pandemic and fired 11,000 health workers even though he promised to get Albertans back to work.

But Kenney does hand out jobs to those of the right political faith. To help solve the province’s self-inflicted financial woes, Kenney has hired Ben Harper, Stephen Harper’s son, because the 25-year-old lad has a degree in economics.

Or consider John Horgan, a so-called friend of the working man and woman. This cynical guy called an election during a pandemic knowing that fear of virus would give him the political majority that he so craved.

Horgan, a man as empty of ideas as Joe Biden, figured his government needed a majority in order to survive the real story on the over-budget Site C dam. And Horgan made sure that reality didn’t appear before or during the election.

On the fossil fuel front, Horgan has outdone Kenney by heavily subsidizing fracking and LNG. That tells you how much Horgan really cares about climate change, which is not much.

Meanwhile, the salmon are disappearing from B.C.’s waters along with the province’s old growth forests.

How’s that for leadership?

Like Horgan and Kenney, Trudeau hasn’t done much real-life work outside the machinations of party politics.

The millionaire only cavorted with the peasants during a brief stint as drama teacher where he demonstrated a penchant for blackface.

Like most of Canada’s liberal elites, Trudeau is a good talker but a dysfunctional walker as the SNC-Lavalin and WE charity scandal so thoroughly demonstrated.

The country’s pathetic China policy best reflects his failure as a leader.

For three years now he has tried to sweet talk the totalitarian regime into expanding trade with Canada to the point of practising “absurd zealotry in the cause of accommodating, placating and pleasing Beijing,” as the journalist Terry Glavin has documented.

When that regime abducted two of our citizens because it didn’t like the way we respected a legal treaty with the U.S. over the arrest of the oligarch Meng Wanzhou, Huawei’s chief financial officer, Trudeau acted like a confused pussycat.

He has yet to act on Huawei and its 5G networks, which create the architecture for total citizen surveillance in China and much spying abroad. (In contrast, most of our allies have said no to Huawei.) He has not ended the intimidation of Canadian citizens by agents of the Communist Party of China. 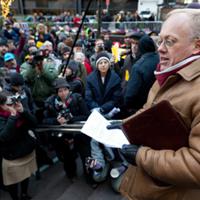 Strapping in for the Big Crash with Chris Hedges

That’s what Canada’s got for leadership.

We are in a revolutionary period. In such times of make or break political and economic transition, good leaders must be architects. They must be able to recognize the historical cycle we are entering, speak to uncomfortable realities and rally people for both change and sacrifice.

Such leaders, and they are rare as Lincolns, spend their time redesigning and transforming the ship for the gales ahead. Their goal isn’t re-election or popularity, but long-term well-being of ordinary people.

Real leaders have another role, too. Their difficult job, as Ralph Nader once noted, is to make more leaders, not followers.

What we have instead at this crucial moment are enablers of slow decline and mass denial, holding us back when they should be urging us on to do what must be done.