[Author’s note: An edited version of this was published by Ricochet in January 2015. Last week I republished it on Media Indigena in its original form, prompted by the refusal of some pundits to even admit the possibility of a Canadian genocide, a term that’s been given renewed currency by the June 3 release of the Final Report of the National Inquiry into Missing and Murdered Indigenous Women and Girls. You can listen to my related podcast here.]

Is Canada guilty of its own genocide? There was a time — not all that long ago — that to even raise the question would be to invite all manner of ridicule.

How things have changed. Today, the topic has shifted from something whispered at the margins to the source of serious study and open debate. Multiple books, even entire conferences, have been dedicated to the subject, less about its plausibility and more about what enabled its possibility. But, for all the increased attention, the question is what action has followed.

[In late 2014], I and about 300 other people at a national Indigenous health conference held in Toronto attended a panel entitled “Genocide: The Canadian Perspective.” Addressing the crowd were neurosurgeon and philanthropist Michael Dan, former Canadian Jewish Congress CEO and rights advocate Bernie M. Farber, as well as former leader of the Assembly of First Nations Phil Fontaine, now an advisor to Royal Bank.

As it turns out, it was the non-Aboriginal panelists who came across as the more adamant: their forceful argumentation suggested they harboured no doubts whatsoever as to the applicability of genocide to the Canadian context. That’s quite something when you consider Farber’s father was one of only two Jewish survivors of the Nazi purge of his hometown in Poland.

But if denial of a Canadian genocide is no longer so automatic, does such recognition or acceptance go very far? For example, like Farber, what often gets my back up is some people’s insistence on using the phrase “cultural genocide” (or “ethnocide”) to describe the wrongs waged by the Canadian state and populace against Indigenous peoples. Frankly, for me, it feels like a qualifier, a way to diminish and somehow contain the effects of that conduct — even excuse it. As if to say, “Sure, I grant that the government did some pretty shitty things way back when, but, c’mon, it’s not like we dropped a H-bomb to wipe you guys off the face of the planet, right?” (I must confess, some F-bombs of my own rush to mind at such moments.)

But here’s the thing: according to Raphael Lemkin, the man who coined the term genocide (and thus exerted great influence on the moral, legal and political framework that followed), this crime against humanity doesn’t necessarily require the total physical annihilation of a people.

Instead, Lemkin wrote, genocide is “the criminal intent to destroy or cripple permanently a human group” (emphasis mine). As to what constitutes ‘crippling,’ it seems likely he’d admit such bedrock Canadian policies as the single-minded, systematic effort to eradicate the linguistic and spiritual foundations of some 60 distinct Indigenous peoples via residential schools. 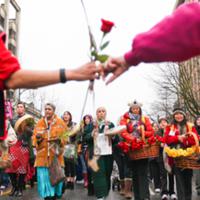 And yet, for some, there’s a word in Lemkin’s sentence that either attenuates or outright absolves Canada’s responsibility for genocide, the word intent. Did Canada really mean to cause Indigenous populations such pain and suffering out of some perversely pre-meditated plan? Didn’t the country force thousands of Aboriginal children into those schools ‘in good faith,’ only to later realize the damage these institutions had inflicted? It’s a convenient cop-out, one many fall back on to escape justice or evade guilt.

How inconvenient then are the facts of the matter, a number of which came up in Michael Dan’s methodical indictment of ‘Indian’ residential schools. According to Dan, decision-makers knew as early as 1907 of the “public health crisis” ripping through some schools, with Aboriginal students suffering outrageously high death rates (24 to 69 per cent) due to tuberculosis, which thrived amidst the overcrowded, dilapidated schools. And yet, “Canada chose to do nothing,” building some new schools but leaving the older ones intact.

Which means that when attendance was made mandatory for all Status Indian children by 1920, the use of these veritable death traps was, according to Dan, “intended, by omission, to bring about the physical suffering and destruction of an entire group.” Clearly, more than languages died within those insidious institutions, and not by what we could call chance.

Farber, meanwhile, cited recently published scholarship by University of Regina professor James Daschuk as evidence of Canada’s genocidal intent. In his acclaimed book, Clearing the Plains, Daschuk documents the deliberate, often fatal, campaign of starvation prime minister John A. Macdonald imposed upon Indigenous peoples as a way to relocate them off their lands and thus make room for immigration and a railroad.

To Farber, the parallels that can be drawn between these sickening tactics and those of another genocide — that of Holodomor, when millions in the Ukraine died due to famine engineered under Stalin — are both obvious and apt. The difference is but in scale.

For his part, Fontaine said he agreed “100 per cent” with his fellow panelists. He also spoke candidly about why the multi-billion-dollar residential school survivor settlement he helped negotiate made no explicit mention of genocide: “Even though we knew people deserved more, we also knew it would see nothing happen if we pushed for its inclusion.”

Fontaine then alluded to the manifold challenges First Nations continue to endure as a living legacy of the depravity of successive Canadian governments: ill health, poverty, a severe housing deficit, poor access to drinking water, and, perhaps most staggering of all, current numbers of children in state custody that surpass the levels achieved at the height of the residential schools era.

As Farber has notably stated at the event and elsewhere, Canada must finally face up to “a genocide in search of a name, but no longer in search of the facts.”

The sad and horrible truth is, it did happen here, and if we are to collectively move beyond this bloody history (the knock-on effects of which still clearly play out today), Canada must fully own and atone for what it’s done to this land’s original peoples on terms, and by means, agreeable to both sides.