In the dying days of the Alberta election campaign, we think it’s urgent that voters know what we know as frontline oilsands workers.

In particular, we think Albertans deserve to know that many people within Alberta’s biggest oilsands companies — including top executives — are worried that United Conservative Party leader Jason Kenney represents a threat to the future of our industry.

With that in mind, we are calling on oilsands company executives, our bosses, to share with voters what they’ve been saying to their employees and investors; namely that the province’s oilsands industry would be better off with Rachel Notley’s energy policies.

Our assertion that Notley would be better for the oilsands may come as a surprise to some people — but it shouldn’t.

The big oilsands companies helped craft the Notley government’s Climate Leadership Plan — not because they’re a bunch of wild-eyed socialists or tree-huggers, but because they understand that the industry must decarbonize to survive in a changing world.

The Climate Leadership Plan, unveiled in late 2015, has helped Alberta oilsands companies reduce their emissions faster and more economically than the policies of the old PC government. UCP leader Kenney wants to revive those outdated policies, which would have the effect of rewarding environmental laggards and punishing the top performers.

Given the fracking boom and oil glut in the United States, everyone understands that the future of our industry depends on getting into new markets in China and India. But both of those countries are introducing tough new carbon pricing systems.

The only way to get into those markets and become a player on the world stage is to reduce emissions. That’s what people like outgoing Suncor CEO Steve Williams mean when they say we need to become ‘carbon competitive.’

Kenney’s approach of ignoring what our potential customers really want is a recipe for being left behind, in terms of both investment and jobs. To put it bluntly: Jason Kenney just doesn’t get it. And we’ll all pay the price for his ignorance. 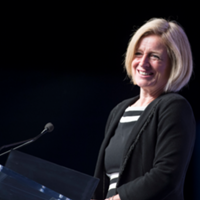 In fact, we would go so far as to say that someone with Kenney’s weak grasp of what’s really happening in global energy markets is simply unfit to govern an oil-producing province like Alberta at this time of profound change.

Kenney is also unfit to oversee Alberta’s oil economy because his promise to scrap Alberta’s current climate policies might actually lead the federal government to rescind its approval of the Trans Mountain Pipeline (which was approved explicitly because of the Notley government’s climate policies), and because he has no serious plans to diversify the Alberta economy.

In contrast, the NDP has been rolling out the boldest oil and gas diversification strategy that Alberta has seen since the days of Peter Lougheed. The Notley government’s “Made in Alberta” strategy has already attracted $13 billion in private-sector investment and led to the creation of thousands of jobs.

Once fully implemented, the plan will create 70,000 jobs over the next 10 years and attract $75 billion in new investments in petrochemicals, refining and upgrading.

The bottom line is that Notley has a clear and comprehensive plan for dealing with the rapidly changing global oil and gas landscape. It starts with rail and pipelines to get our products to market.

It continues with policies that support companies that are reducing emissions to gain a competitive advantage in an increasingly carbon-constrained world.

And it culminates in a bold and visionary plan to diversify our economy both within and beyond oil and gas — so we don’t continue with the risky strategy of having all of our economic eggs in one basket.

Kenney, on the other hand, just has hot air and anger.

So, if voters are thinking about holding their noses and voting for Kenney “because of the economy,” we urge them to think again.

It’s Notley who has the right diagnosis and the right prescription. And it’s Kenney who’s selling snake oil.