Here’s why the scandal over U.S. university admissions should make us rethink funding for elite private schools in British Columbia.

A man named Rick Singer has admitted to charging parents up to $250,000 to hire people to write tests for underperforming students and bribing university staff to make false claims that the kids were needed for athletic teams, all to get them into prestige schools.

Which shouldn’t be surprising. A Harvard or Stanford degree is a kind of golden ticket, one that conveys lifetime benefits on the lucky holder. It’s a brand statement. Doors open, even if the student wasn’t actually bright enough or hardworking enough to get into the school legitimately.

For the wealthy, ensuring children have a degree from those schools is just another way of asserting and entrenching class inequality in a supposedly egalitarian society.

After the news broke of the scam, there was some quick self-congratulation about the considerably more democratic approach to university degrees in Canada.

But before we get smug, consider the way we’ve turned education into an inequality machine in the earlier grades. And that in five provinces, including B.C. and Alberta, taxpayer money is being used to fuel the machine.

Toronto’s Upper Canada College, with its name proudly rooted in the early 19th century era of the Family Compact, is the heavyweight champion of elite schools. The school boasts of producing four premiers, six lieutenant governors and seven chief justices. (And, we now know, several victims of sexual abuse).

UCC charges up to $36,300 for day students, and makes no bones about what it’s offering for the money. Great facilities and “transformational learning experiences,” of course.

But the welcome page on the school’s website also notes that “boys establish lifelong friendships and connections.” Upper Canada College can “open doors” and graduates benefit from a “lifelong worldwide network” of what are called, somewhat sadly, “Old Boys.”

Connections and networks. Lifelong benefits, for kids whose parents have the money to buy access to the club. (The school offers financial aid, but 80 per cent of students pay the full fare.)

But at least Upper Canada College pays its own way. The Ontario government doesn’t see any reason citizens should subsidize a school that promises to open doors for kids with rich families.

In B.C., taxpayers — low-income families, single parents — are paying taxes that subsidize private schools their children can never hope to attend. Families barely getting by are helping pay for an elite private school for a teen from a richer family.

And the government is maintaining a private school funding policy that increases inequality and inherited privilege.

But the B.C. government could easily adjust the funding formula in ways that preserve choice without endorsing a two-tier school system that increases inequality.

The current formula is based on the per-pupil spending of public schools — about $9,040. Private schools that spend the same, or less, per student than the local school district get 50 per cent of the grant, or about $4,520.

Private schools that spend more per student than the local district get 35 per cent of the grant — about $3,165 per pupil.

All in, taxpayers will give the private schools about $437 million in the next fiscal year.

You can make an argument for funding private schools that offer a comparable educational experience, with similar resources, as a way of providing choice for parents. (Though not a convincing one.)

But not for providing a taxpayer subsidy to high-priced schools that entrench class interests and inequality. A 2018 review found 41 of the 365 independent schools receiving public funding were “elite” private schools.

Like St. George’s School, which charges $26,000 tuition for high school students and promises a superior educational experience. According to its charity filing, it received $3.5 million from provincial taxpayers in 2017.

It’s undoubtedly a good school. It should be, given that it is spending more than three times as much per student as nearby public schools.

But why should a single parent whose child is attending a public school — perhaps in a portable because of underfunding — subsidize the affluent parents of children at schools like St. George’s?

Defenders of the status quo point out that it would cost more if all the private school students rushed back to the public system.

First, they wouldn’t. Parents paying $20,000-plus in school fees aren’t going to balk at a $3,000 tuition increase because the province pulled its funding.

But if they did, that would be good. Public schools have been steadily losing market share, and today 13 per cent of students are enrolled in private schools. Many of their parents have the ability and opportunity to push for better public education — if their children were in the system. 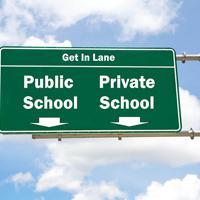 The U.S. university admissions scandal — with a Canadian connection — has highlighted its class system.

But here in B.C., we also have our own, legal way to allow people to assert privilege.

That seems a good issue for an NDP government to address. First, by making changes to ensure the public school system is parents’ first choice. And second, by ending taxpayer subsidies to elite private schools.

We like to believe that every child has an equal chance. That effort and ability are enough. But that’s a lie when it comes to U.S. university admissions, and when it comes to education in B.C.

Ending subsidies to elite schools would be a good step toward greater equality, and a better future for the province.