The best thing about NAFTA 2.0 is that Canada’s economy survived Donald Trump’s volatility.

The next best thing is that it will soon reinvigorate our sovereignty. Three years after new NAFTA replaces old NAFTA, the agreement’s special protections for foreign investors will be removed. That is something to celebrate.

Thus, our legislatures will soon be able to pass laws that are final — if upheld by Canada’s courts under our Constitution — and free from the threat of having to pay massive compensation to U.S. companies that object to the law.

For Canada and the U.S., NAFTA’s special rights for foreign investors have meant that the final word on our laws has been reserved for a tribunal of three lawyers, sitting as “arbitrators,” whose job is to protect foreign investors from risks of democracy, regulation, and courts.

These “investor-state dispute settlement” (ISDS) tribunals can award large amounts of public money to multinationals, in some cases even billions of dollars. No international court has such power. National courts are likewise cautious to award compensation in this way because of the challenges it creates for public budgets.

Worse, ISDS tribunals are grossly imbalanced. They safeguard investor rights, not investor responsibilities. They do not hear claims by countries against investors. They do not give other actors, who have an interest in the dispute, a basic right of standing in the process.

The well-paid arbitrators who sit on ISDS tribunals are also not independent like judges. They depend on foreign investors for income because only the investors can bring the claims that create business for the arbitrators. And many arbitrators work as lawyers in other ISDS cases, creating widespread conflicts of interest.

Under old NAFTA and other agreements, the arbitrators have often interpreted investor rights in dubious ways. Vague concepts like “fair and equitable treatment” and “full protection and security” for investors were contorted into a right to receive compensation when general laws are changed for public purposes. Much of the compensation ordered by tribunals has been for expected profits that the investor might have earned, based on speculative assessments. ISDS litigation itself became the investment. 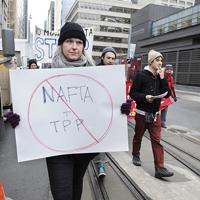 Americans from across the political spectrum are also repelled by ISDS. U.S. trade representative Robert Lighthizer recently told (at about the 6-minute mark) a U.S. Congressional committee: “we’ve had situations where real regulation which should be in place which is bipartisan, in everybody’s interest, has not been put in place because of fears of ISDS.” If ISDS has made big companies too risky to regulate in the U.S., what are the chances for governments trying to regulate them here?

Regulatory chill is the worst cost of ISDS. Behind the scenes, it pushes governments to sacrifice Canadian rights for powerful special interests. Foreign investors can block regulations by pointing to the super-tribunals that protect them alone.

Removing ISDS from NAFTA 2.0 does not free Canada from ISDS, but it fixes the biggest problem. The federal government should pursue new agreements — as New Zealand has done under the re-born Trans-Pacific Partnership — to drop ISDS. We should respect each other’s democracies and courts and, if some companies have doubts, they have the option to negotiate for ISDS in their government contracts, buy insurance against political risks, or just decline to invest in unreliable countries.

Though much was relinquished in the new NAFTA to avoid a trade war, the demise of ISDS is a historic win for Canada.