Environmental issues are usually amongst the first issues for consideration when First Nations think about development, and they must decide what impacts to their rights and title are acceptable. What can appear to be somewhat paradoxical for some people is that environmental pressures can instead serve to be amongst the strongest driver for economic self-sufficiency for First Nations in B.C.

Clean technology is one of the fastest growing sectors in the world and it already makes up over five per cent of global GDP. In B.C., Independent Power Producers (IPPs) are focused on this new world. They are a vital element of the electricity production in B.C. and they work hand-in-hand with First Nations and BC Hydro to keep the lights on and the carbon emissions very low. With the recent B.C. government announcement that the Standard Offer Program (SOP) is being re-launched, the opportunities are opening up again in B.C.

Clean energy sits at the very core of this expansion as the world shifts from high-carbon industries to low- and zero-carbon. This is about the transition away from sunset industries to sunrise ventures. It is about engaging directly with First Nations communities so they can benefit from local power production, ownership and sustainable economic development. IPPs enable the distribution of energy generation to a wide variety of parties throughout the province that serve to catalyze economic development across the province’s First Nations, local municipalities and both rural and urban environments. This is especially vital for First Nations because a dollar spent in a local economy, on local labour, with local products and with local investment, can result in many times as much value as the same dollar spent on a product from a large corporation with outside suppliers, outside employment and profits leaking out of the local economy. This is called Local Multiplier 3 (LM3), which is an economic term:

“LM3 measures the multiplier effect of income into a local economy over three 'rounds' of spending. The multiplier is then calculated for every unit of currency spent within a ‘local’ area selected by the user. For example, an LM3 score of 3.50 would indicate that every $1 earned by a project generates an additional $2.50 for your local area.”

We are starting to see radical decreases in cost and increases in performance of clean technology. In 2015, photovoltaic (PV) solar costs dropped by over 50 per cent from 2010 and are anticipated to drop another 40 per cent by the end of this year. Wind power is following a similar trajectory with a reduction in cost of 50 per cent in the last five years. Electricity storage is also in the midst of a renaissance with costs dropping over 77 per cent since 2010, even before the role out of industrial manufacturing giants (think of the Tesla Gigafactory).

At its heart, this is about fostering a vibrant and long-term decentralized renewable energy sector in B.C. that supports First Nations innovation, clean technology industries, jobs and the local economy.

Although First Nations in British Columbia are already very active participants in the renewable energy sector, very little research has been conducted to assess the scope and implications of their involvement. Seeking to address this knowledge gap, the B.C. First Nations Clean Energy Working Group (FNCEWG) partnered with researchers at the University of Victoria’s School of Environmental Studies to conduct a province-wide survey. Support for the survey was provided by Clean Energy BC and Indigenous and Northern Affairs Canada (INAC).

The research team attempted to contact 203 First Nations across the province from October 2016 to February 2017. In total, we received responses from 102 (50 per cent) First Nations and three Tribal Councils. The survey results presented in this report thus indicate the minimum level of First Nations’ involvement in the renewable industry in B.C. at the beginning of 2017.

How are First Nations currently involved in renewable energy development? 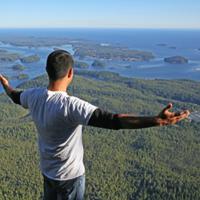 Lessons in Hope and Resilience From the Tla-o-qui-aht

How would First Nations like to be involved in renewable energy development?

What are the potential impacts of a decelerated renewable energy industry?

Renewable energy offers flexibility and adaptability that can quickly bridge any gap that arises in B.C.’s energy needs. It enables B.C. and Canada to achieve its carbon reduction targets, while at the same time offering amongst the most effective reconciliation opportunities available for the provincial government.