Pit bulls — the most dangerous breed in the world — continue to kill and maim large numbers of both humans and animals here in British Columbia. But will anyone act to stop it?

In 2016 in the United States there were 31 dog-related fatal attacks and 71 per cent of them — 22 deaths, including seven children under 10 — were attributed to pit bulls. Even though they make up just six per cent of the dog population.

That’s why October 28 is Pit Bull Victim Awareness Day in Canada and the U.S. The organizations supporting it say, so far this year, media have reported a stunning 620 pit bull attacks on people.

That’s why Ontario banned pit bull breeds in 2005 and dramatically reduced the number of attacks. Winnipeg did the same in 1990, as have many other Canadian cities.

Montreal banned them after a 55-year-old woman was mauled to death in her own backyard last year, and Quebec has introduced ban legislation.

Even U.S. military housing — with armed soldiers everywhere — bans pit bulls as too dangerous, keeping them off bases for years.

But here in B.C.? Nothing for 16 years from the former BC Liberal government.

It’s time for action from the New Democrat government, in alliance with the Green Party, before a child dies from a pit bull attack and to stop ongoing violence that severely injures children and adults and kills other dogs, cats, pets and livestock.

The need is great. In late August, a pit bull seriously injured a Chilliwack woman and her dog –— and as of September, the dog had still not been seized.

Also in August, a Fort St. John man and his dog were attacked and injured by two pit bulls.

That city had already seen a horrific attack. In December 2015, a man was severely injured by two “bully breed” dogs that invaded his home in an attack described as a “Texas chainsaw massacre” because of the blood and violence.

Robin Elgie, a heavy duty mechanic, required seven operations on his arms over several months after two dogs raced into his trailer, attacking him, his girlfriend Wendy Lee Baker and his dog, and killing his cat.

RCMP officers attending the emergency call had to shoot both dogs to end the attack.

A friend called it a “Texas chainsaw massacre.”

“When I went in there, I could not believe that band of blood across the wall,” said Guy Taylor.

Both dogs had escaped from a backyard pen about 500 metres from Elgie’s home. The CBC reported that one of the pit bulls had been apprehended and released back to its owner just weeks before the attack.

“They were the friendliest things ever. They were licking me so hard my glasses came off. These are not killer dogs,” said Candace Buchamer, branch manager of the North Peace SPCA, who knew both dogs.

And yet they almost ended Elgie’s life.

Certainly, the dogs devastated his life. He can no longer work at his profession due to the severity of his injuries. Friends have started a GoFundMe campaign and have raised $24,000 thanks to a generous community — but it’s not enough to make up for his lost livelihood.

And just last week, a Victoria provincial court judge upheld an application by the city’s animal control officers to put down a vicious pit bull that had brutally attacked another dog. One of the owners says he plans to appeal.

“I’ve never seen a dog with a bigger mouth. This dog went for the throat,” McPherson said in testimony. Bentley left Cassie with a laceration from her neck to her abdomen and crushed her spine. The injuries were so severe, the injured dog had to be euthanized.

In court, Mrozinski saw videos of Bentley attacking artificial decoy dogs while in the animal shelter.

“These videos show Bentley is an animal not to be trifled with,” Mrozinski said. “He almost instantly rises to the attack to the point of injury if not death. How can such an animal be reintroduced to the community to live among adults, children and other domestic animals?”

Such pit bull attack cases are just the tip of the proverbial iceberg, as a simple Google search proves.

A documentary on CBC’s The Fifth Estate reported last month that millions of dollars are being spent on campaigns to “rebrand” pit bulls as safe, family-friendly pets.

Michael Golinko, director of plastic surgery at Arkansas Children’s Hospital, saw so many serious injuries to children that he started researching pit bull attacks. “Almost every night we saw a dog bite and, more often than not, the more severe ones were pit bulls,” he says.

“Dog bite injuries remain a common form of pediatric trauma,” the abstract reports. “This single-institution study of 1,616 consecutive dog bite injuries over four years revealed a much higher prevalence of dog bites as compared with other similar centres. Though inpatient admission was rare (9.8 per cent), 58 per cent of all patients required laceration repair, primarily in the emergency department.

“Pit bull bites were implicated in half of all surgeries performed and over 2.5 times as likely to bite in multiple anatomic locations as compared to other breeds,” it states.

Golinko, himself a dog owner, warns that when it comes to children and pit bulls being together, “I think there's too much of a risk from what I’ve seen to advocate or sanction that.”

A literature review by the National Canine Research Council, a U.S. non-profit opposed to pit bull breed bans, says there is “no reliable evidence that demonstrates a link between breed and fatal dog bites.”

“Educating the public on responsible dog ownership may be an effective method for reducing dog bite-related fatalities,” it notes.

I believe the children’s hospital plastic surgeon and other doctors who have seen firsthand the extreme violence and injuries very young kids and even infants have suffered over the claims of pit bull advocates — and I don’t expect these owners to ever agree either.

Some of those owners tend to be rather vicious themselves when it comes to attacking anyone who writes negatively about pit bulls or supports a breed ban.

Here’s what one woman emailed me last month, presumably after seeing one of my past columns about pit bulls, even though I haven’t written about them in many months. The message has not been edited. 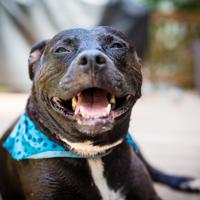 Pit Bull Ban Needed More than Ever as Attacks Escalate

“Bill tieleman you're a fucking retard if you think that only problems are pit bulls, It’s the owners that train them to be vicious I have a 2 year old Pitt bull that is nothing but a sweetheart to everyone around her because I trained her to do so. Educate yourself you stupid cunt. If you’ve ever had a family pet you’d understand so shove your opinion up your ass because no one gives a shit!”

Sadly, this is not an unusual response to calling for pit bulls to be banned. And I have owned dogs as pets before.

To be clear, pit bull bans do not mean people’s pets are euthanized. In Ontario, pit bulls cannot be bred or imported into the province but those already there at the time of the ban are allowed to live out their lives.

Pit bull owners are often their own worst enemies. But I refuse to be intimidated by either them or their pets, as dangerous as at least the latter are.

So if you worry about the danger of pit bulls to yourself, children or pets, tell your MLA to ban pit bulls in B.C. It’s time our safety came first over the right to own a potentially deadly animal.