"You're a naive ignorant c**t if you wanna ban an entire breed of animals... trust me bud if anyone is gunna attack you it'll be me not my pitbulls." -- Email to me from pit bull owner on June 25 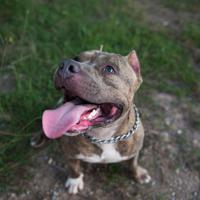 As the number of vicious, maiming and fatal pit bull dog attacks escalate in British Columbia and beyond, so too does the ferocity of their owners in trying to bully those who support a ban on the breed.

Last week a Surrey woman's arm was ripped open in an unprovoked pit bull attack where the owner simply fled the scene.

On Friday two people were mauled in Vancouver by a dog whose breed isn't yet known, with one going to hospital.

And Quebec City and Montreal moved quickly to ban pit bulls last week following the horrendous death of a Montreal woman mauled by a neighbour's dog in her own yard.

But some pit bull advocates could not care less about the injuries -- they only worry about a ban on the aggressive and powerful dog breed. In fact, Quebec City police are worried about Mayor Régis Labeaume's personal safety after 13,000 Facebook comments about the ban.

This weekend a previous column drew the attention of pit bull advocates -- and resulted in several emails like the one above with veiled threats against me for calling for a ban.

The facts are clear. One breed of dog is responsible for most of the deaths and serious injuries: the pit bull category and related mixed breeds.

Last year in the United States pit bulls were responsible for 28 of 34 reported dog bite fatalities -- 82 per cent -- despite making up only about 6.6 per cent of the dog population.

That's because the horror stories continue as relentlessly as a pit bull attack.

In New Haven, Connecticut, a 53-year-old woman lost both eyes and one leg in what was initially reported as a pit bull attack. She died last night, according to reports.

Also last week, a 58-year-old woman was seriously injured in a pit bull attack by a neighbour's dog in Callaway, Florida. When police went to her rescue the pit bull charged them and was shot dead.

But despite ample evidence showing pit bulls with no history of abuse that were raised in loving homes have suddenly snapped and attacked children and others, the defence of pit bull advocates continues: it's the owner, not the dog, they always claim.

Tell that to Surrey resident Brenda Moon. An uncontrolled pit bull savaged her so severely outside a Mac's convenience store that her arm was broken and the bone visible.

"He had me in his mouth and was shaking me... and then he dragged me," said Moon of the unprovoked attack.

The dog's owner left the scene with the pit bull despite Moon's serious injuries -- but he will not be charged with anything, say RCMP, because there's no law for the dog equivalent of a hit and run.

"So why are the police putting in all their hours trying to find this and stop them, if in the end they can't do anything... what is the point?" Moon asks.

And while the pit bull was euthanized, the owner is free to get another pit bull without any penalty at all, while the traumatized Moon may never fully recover.

But far too many pit bull owners could not care less about the destruction the breed is responsible for, and they damage the cause of reasonable owners.

Another threatening email I received this weekend over a past column is typical.

"You need to seriously start thinking about what youre saying. Pitbulls are like children for some people... you wont ever see me give mine up. ever. thats my child. And you are now the enemy. You propose sanctions on my family that you know nothing about. You are the enemy. Dont ever forget that," [sic] the owner wrote.

And while Ontario has banned pit bulls since 2005 and Quebec may also, Premier Christy Clark shrugged off calls for a province-wide pit bull ban, saying it's up to individual cities and towns: "Local governments have the power to do that now -- I'd urge them to do that, if that's a concern for them."

Not nearly good enough. While municipalities should institute bans, the most effective and appropriate way to stop the carnage is with a provincial ban.

And to be clear -- because some pit bull advocates don't get it -- existing dogs would not be put down. There would simply be a ban on any future breeding or importation of pit bulls.

B.C. should act because local government is susceptible to the extreme pressure and lobbying that pit bull advocates exercise to stop or overturn any bylaws they dislike, as happened in New Westminster in 2013 when a breed-specific dangerous dog bylaw was repealed.

But even after yet another savage pit bull attack in 2015 in New Westminster, the city said that it had "no plans" to amend the bylaw and restore previous protections.

Despite a never-ending stream of serious attacks in B.C., it appears governments won't act until forced to by a horrific child death.

Said Surrey attack victim Moon on pit bulls: "People shouldn't be allowed to have them. How many people do they have to kill? Somebody will die."