If you want to know how irrationality can get a grip on politics, as it has in the United States, look at the United Conservative Party leadership race in Alberta.

Most Canadians probably haven’t read our constitutional documents. They haven’t done research on which powers are under federal jurisdiction and which fall to the provinces. We rely on what people in authority know and say about federalism.

On the other hand, leaders of political parties are generally pretty educated and savvy about federalism. After all, they’re a group that tends to study power pretty closely. Premiers and prime ministers know exactly where they have exclusive power, shared authority or no authority at all. And if they don’t, they have civil servants who will give them an education.

Despite all that knowledge, we still have politicians making promises they have no authority to keep. That demagoguery leaves Canadians confused about how their own country works. It allows debate to turn into irrational populism.

We saw some of that populist nonsense in the B.C. election when then-premier Christy Clark threatened to tax U.S. coal exports that travel through the province by rail in retaliation for the U.S. duties on softwood lumber.

Of course a premier has no authority to make good on such a threat. And strangely, not only did Prime Minister Justin Trudeau do nothing to lay bare the facts for B.C. voters, he said he was “considering this request carefully and seriously.”

Perhaps B.C. voters figured it out. Clark lost the election, stepped down and nothing has been heard about the ludicrous idea since. But the fact that her campaign comments drove the news cycle for a couple days shows how this populist nonsense can be used by politicians.

In one outburst, leadership contestant Jason Kenney threatened to cut off oil and gas exports to B.C. if its government slows the construction of the Trans Mountain pipeline.

Kenney made this threat even through private companies own the fuel and the pipeline. He said it even though provinces are constitutionally forbidden from passing laws compelling private companies to carry out such a blockade.

So unless Kenney secretly intends to nationalize pipelines and refineries, it’s hard to understand how his threats aren’t pure gibberish.

Kenney has also suggested he might hold a referendum to force the federal government to renegotiate equalization. Equalization is a program that transfers money from the federal government to provincial governments that have a lower “fiscal capacity” — that is, where economic conditions such as lower incomes lead to lower provincial government revenues. The goal is to ensure Canadians, regardless of region, have approximately the same access to social programs like education and health care. Crashing equalization would be a huge step toward collapsing public health care.

There are a couple of problems with Kenney’s suggestion.

Second, the authority to set the formula for calculating equalization transfers is exclusively within federal jurisdiction. The suggestion that an Alberta premier could force a renegotiation is a nose-stretcher.

And Kenney has to know better. The current equalization formula was created in 2007 by the Conservative government of Stephen Harper in which Kenney was a minister.

These recent outbursts of demagoguery come on top of several other dubious claims by Kenney during this campaign.

Kenney has spent months campaigning to kill Alberta’s carbon tax. As premier, he would have that authority.

But — and surely he knows this well — the federal government also has the authority to place a tax on carbon-emitting products that would replace any tax gap created by a provincial cancellation. Any suggestion that this tax cut would put money in Albertans’ pockets is illusory.

And you would think an old Reformer would think it infinitely better that a provincial government set its own taxes and manage its own affairs than hand over that economic lever to Ottawa. 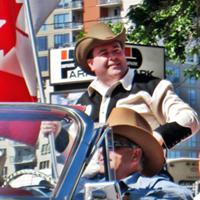 And then comes this nonsense about cancelling Alberta’s plan to transition from coal for electrical generation — currently generating about half Alberta’s power — and implementing what Kenney calls “clean coal.” If you remember, that was a fantasy idea of Donald Trump.

The problem is “clean coal” doesn’t exist. All coal produces massive carbon emissions when burnt. Yes, there are so-called clean coal technologies, carbon capture and storage being the most prominent. But it has a dismal track record.

In Saskatchewan, with just one million people, Premier Brad Wall spent $1.5 billion on a carbon capture and storage facility to keep the coal fires burning in SaskPower’s plant in Estevan. That cash was no doubt appreciated by coal mine owners. But it’s an average cost of about $1,500 for every Saskatchewan resident. A 2016 report by a former World Bank economist estimated that replacing the plant with an efficient gas-powered plant would have resulted in the same cut in CO2 emissions at one-tenth or even one-twentieth of the cost.

The most logical path is the one Alberta Premier Rachel Notley has taken — move away from coal toward a mix of renewables and gas-powered plants and organize a transition plan for the workers affected.

But these debate aren’t about logic. They sideline logic. As with Trump, this type of politics sprays so much nonsense and magical thinking into the conversation that facts are unknowable and rational choices aren’t possible.

And when citizens have had facts and choice taken away, they are utterly vulnerable to the snake oil salesmen and political grifters.