So who won and who lost in the B.C. election?

The BC Liberals obviously lost, and face some big decisions. Christy Clark has opted to continue as premier until the party is defeated in the legislature, likely in June or early July. That gives her a chance to present a Throne Speech and budget, which raises its own challenges.

Stick with the principles that you proclaimed two months ago in the election campaign? Or abandon them to offer a Throne Speech that’s the basis for the next campaign, whenever it comes?

Both options are perilous. The BC Liberals would seem arrogant for sticking with an approach that voters had rejected, opportunistic for suddenly embracing policies they had ridiculed.

The coming months will also test the party’s ability to learn from the results. It was hardly an electoral disaster, especially after 16 years in government. But the Liberals’ share of the popular vote — 40 per cent — is the lowest since 1991. Clark’s tenure was marked by scandals, indifference to public concerns about things like out-of-control political donations and soaring housing costs, and disdain for anyone who with different views. It’s not surprising that some potential Liberal voters defected.

So far, Liberal partisans on social media seem to be spending a lot of time complaining the outcome is “not fair” and slagging Green leader Andrew Weaver because he didn’t do what they wanted, and not much time wondering why the Greens found a deal with Liberals impossible. (Or, as Norman Spector, who advised the Greens in negotiations, tweeted: “Ultimately, @BCGreens recoiled [sometimes physically] at the prospect of supporting a Liberal government.”)

That all changes with the new NDP-Green government. Its opposition to the Kinder Morgan pipeline expansion will highlight the contradictions in Trudeau’s claim to be a leader in combating climate change while approving pipelines that increase tar sands production. Trudeau either fights for the pipeline — which will hurt his party’s chances in the province in 2019 — or faces Conservative attacks for not standing up for resource industries.

In the short term, Andrew Weaver and John Horgan and their parties, of course. They get a chance to form government based on a 10-page public agreement that is very much worth reading. It’s principled, detailed on key issues and preserves a lot of autonomy for both parties. It’s the farthest thing from a “backroom deal” that some Liberals claim.

There are risks of course. The agreement says the minority government will send the Site C dam to the BC Utilities Commission for review, for example. But it’s not clear what happens if the commission’s findings are equivocal. Both parties agree to support electoral reform in a referendum in 2018, but that doesn’t mean the three Green MLAs and their supporters will be happy with the NDP’s effort.

And both parties face a big problem with next year’s budget. The BC Liberals’ pre-election budget promised a reduction in MSP premiums starting next Jan. 1. That meant a small revenue loss this fiscal year and a big hit — about $850 million in lost revenue — next year. The Liberals planned to cut spending. The new government faces some tough decisions on whether to go ahead with cuts, or increase taxes.

MLAs from all parties are big winners, I hope. This will be a remarkably precarious government, with every confidence motion likely decided by one vote.

On one hand, the parties will be whipping their MLAs to show up and toe the party line. But MLAs also have tremendous newfound clout. If Horgan and Weaver don’t listen to members’ concerns, all it takes is one MLA who decides to skip a confidence vote and the government falls. If Clark clings to power against some MLAs’ wishes, they can skip votes, sit as independents or even as Conservatives. The agreement between the parties calls for increased use of legislative committees on issues like health and education, sidelined for more than a decade, and “allowing MLAs an opportunity to have input on policy decisions.” (Pause to consider how perversely undemocratic it has become that such a clause is even required.) 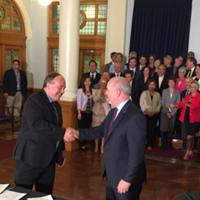 And citizens are the biggest winners. Not just because the Green-NDP agreement commits to overdue measures to improve democracy, like bans on corporate and union donations and partisan taxpayer-funded advertising, regular sittings of the legislature and a push for electoral reform. But also because the Greens and NDP together have the support of 57 per cent of voters, the second highest base for any government since 1949.

We have, at least for now, a government based on co-operation and compromise between two parties. This served their interests, of course. But if the agreement survives, it will also set a new standard for politicians, one that requires them to set aside, at least briefly, partisanship and find common ground.

And both parties — especially the Greens — have a powerful incentive to make the agreement work for the next four-and-a-half years. (The agreement calls for the next election to be in the fall of 2021, not May. It’s a better option, requiring governments to introduce credible pre-election budgets, which are fully debated.) This is their chance to demonstrate their relevance, and the effectiveness of minority governments.

But mostly, citizens win because they see there is the possibility of an alternative to politics as usual. Few people are satisfied with the way that has worked. Now we get to try something different.