“We think we know what we’re doin’
We don’t pull the strings
It’s all in the past now
Money changes everything.”

Money does change everything — and for much the worse in British Columbia politics.

This province became an international laughing stock last week when a headline in the New York Times accurately described B.C. as “the wild west of Canadian political cash.”

The Times quotes critics who say BC Liberal Party donors “often appear to have benefited financially from their political generosity” and references real estate developers, banks, oil pipeline proponent Kinder Morgan — which has given $718,000 since 2011 — and mining companies. It’s a long list.

And the newspaper also cites a court case in which B.C. Conflict of Interest Commissioner Paul Fraser is himself accused of being in a conflict of interest. Fraser ruled Clark’s cash-for-access fundraisers didn’t create a conflict — but he made the decision even though his son John Paul Fraser is one of Clark’s deputy ministers, a friend and a former Liberal campaign worker.

B.C. truly is an outlaw state compared to other jurisdictions that limit and monitor fundraising in the public interest.

The federal government and Alberta, Manitoba, Ontario, Quebec and Nova Scotia have all banned corporate and union donations to political parties to remove the perception that money changes everything. They restrict contributions to individuals, with annual limits as strict as only $100 a year in Quebec.

But not B.C., which is the Canadian equivalent of some Eastern European backwater run by a dubious despot who gets paid on the side on top of collecting a handsome government salary.

That’s exactly what happens here with Premier Christy Clark, the Times pointed out, because the BC Liberal Party pays her a bonus of $50,000 a year on top of her $195,000 a year government salary. To date she has cashed in to the tune of over $277,000 since taking power.

So call us the Republic of Clarkbekistan, a rogue place where money rules and play-for-pay politics is the name of the game.

And Clarkbekistan is where citizens’ advocacy group Democracy Watch was on Friday, arguing in B.C. Supreme Court that a judge should overturn commissioner Fraser’s ruling that Clark didn’t violate the Conflict of Interest Act by accepting money from the party while raising hundreds of thousands through exclusive party events where the price of admission was up to $20,000 per person.

Democracy Watch argues Fraser should not have ruled on Clark’s case because of his son’s role connections to the premier. Fraser opposed its petition; the court reserved judgment on whether the challenge can go ahead.

“Any political party that refuses to make these changes is essentially admitting they are up for sale and that they approve of the unethical and undemocratic best-government-money-can-buy approach to politics,” says Democracy Watch founder Duff Conacher. “The only way to stop the unethical and undemocratic influence of big money in Canadian politics is to stop big money donations.”

That challenge isn’t likely to be taken up the BC Liberals, who voluntarily made an early disclosure last week that stated they raised a whopping $12.5 million in 2016 — with almost $8 million coming from corporations.

The BC NDP has not yet disclosed its fundraising results — Elections BC monitors and reports on money raised by all parties later in the spring — but the party raised $3 million in total in 2015, meaning the BC Liberals have likely raised four times as much the NDP for two years running.

And that’s how money changes everything in politics. With a big business funded war chest many times larger than its closest opponent, the BC Liberals can run more television, radio, print and online ads; do more polling; hire more staff; knock on more doors and call more phones for voter identification; and generally gain a huge advantage from that political cash.

It’s the epitome of an unfair fight, like a boxer having one arm tied behind his back against an opponent swinging both fists. Money doesn’t mean everything in an election campaign — there are examples where an underfunded party still wins — but it makes a huge difference.

And that’s why the BC Liberals will not give up their enormous advantage that comes from wild west political financing. It’s too big to sacrifice, no matter how bad it looks.

If there are any warning signs for Clark, they are in polling that shows even BC Liberal voters are unhappy with how she and her party are dealing with fundraising.

An Insights West poll released in late November showed that only 19 per cent of respondents were satisfied with how Clark was dealing with fundraising questions. And 40 per cent of those who voted for the BC Liberals in 2013 told the pollsters Clark was doing a bad job, versus 35 per cent who said good job, with another 25 per cent unsure.

But in case the Republic of Clarkbekistan still doesn’t appear backwater enough, consider that the BC Liberal Party’s election campaign director Laura Miller will be on trial in Ontario in September, facing charges of breach of trust and mischief for allegedly deleting emails related to a scandal involving the decision to scrap two gas-fired power plants. The political decision cost Ontario taxpayers up to $1.1 billion; Miller was deputy chief of staff to then Liberal premier Dalton McGuinty.

None of the allegations have been proved in court. Clark calls Miller a “person of integrity” and Miller says she will “vigorously defend” herself.

Another former BC Liberal Party and government operative, Brian Bonney, faces trial here in October on a charge of criminal breach of trust. Prosecutors allege his role as the government’s communications director for multiculturalism crossed the line into illegal partisan activity. 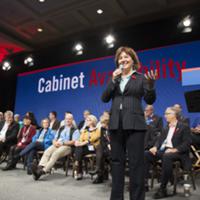 Bonney’s lawyer said he will mount “a vigorous, thorough defence.”

Bonney and his business partner Mark Robertson — another former BC Liberal operative — saw a stay of proceedings entered on charges laid in connection with an alleged violation of the Elections Act. Their numbered company, which did business as Mainland Communications, pleaded guilty to one count under the act and was fined $5,000.

Then there was the “triple delete” email scandal, where BC Liberal government political staff were told to erase sensitive emails three times to remove all traces, according to a report by Elizabeth Denham, then B.C.’s information and privacy commissioner, titled Access Denied.

George Gretes, then a ministerial aide to Transportation Minister Todd Stone, was charged with two counts of attempting to mislead the commissioner. He lost his job and eventually pleaded guilty to one count and received a $2,500 fine.

The Access Denied report also found that staff as senior as Michele Cadario, Clark’s deputy chief of staff, and others in the premier’s office regularly bulk deleted their emails on a daily basis, leaving no trace for freedom of information requests, a violation of B.C. FOI laws.

And that’s politics in wild west B.C. — or the Republic of Clarkbekistan — an international embarrassment where money still changes everything for the worse — unless you’re the party in power.