Donald Trump is America’s first anti-hero presidential candidate — and like the flawed but needed characters in movies and television shows from The Good, The Bad and The Ugly to Die Hard to Breaking Bad, he won’t be the last.

Win or lose today’s U.S. election to Democrat Hillary Clinton, Trump is the end product of decades of popular culture obsession with and admiration for the anti-hero.

Trump shrewdly used his Republican candidacy to create a persona that would step into the pantheon of protagonists who have captivated audiences since actor Clint Eastwood’s “Man With No Name” 1960s movies: a gruff gunslinger who’s no classic cowboy hero but saves the day in unorthodox style — if for A Fistful of Dollars.

Central to the anti-hero is the idea that government is inept at best, corrupt at worst, and unable to protect its citizens from harm by evil forces. Only an anti-hero who disdains bureaucracy, rules and political correctness and doesn’t worry about hurting sensitive feelings can deal with the deadly threats facing ordinary people.

Terrorists kidnap hostages and threaten to blow up a Los Angeles office tower unless their demands are met. The police, FBI and government are powerless — but John McClane, a lone New York police detective who happens to be inside, takes the ruthless killers down by breaking the rules and dispensing violent justice that is richly deserved.

When McClane only gets grief from the establishment for his heroic troubles, he sets them straight, starting with Dwayne T. Robinson, a deputy police chief who tries to claim he’s in charge of the situation.

“You listen to me, you little asshole, I’m...” the chief replies.

“Asshole?...” McClane snaps. “Now, you listen to me, jerk-off, if you’re not a part of the solution, you’re a part of the problem. Quit being a part of the fucking problem and put the other guy back on!”

Now think about ISIS, the Islamic terrorists beheading hostages on video, brutally murdering innocent people indiscriminately and thumbing their noses at America, Canada and the West with seeming impunity.

Trump’s promised response is pure Die Hard: “Bomb the hell out of ISIS!”

“I would bomb the s--- out of them,” Trump said last year, talking about ISIS-occupied oil fields. “I would just bomb those suckers. And that’s right: I’d blow up the pipes, I’d blow up the refineries. I would blow up every single inch. There would be nothing left.”

And American voters hear the echo of John McClane to terrorist Hans Gruber in Die Hard in Trump’s defiant response to ISIS.

“Who are you?” Gruber asks. “Just another American who saw too many movies as a child? Another orphan of a bankrupt culture who thinks he’s John Wayne? Rambo? Marshal Dillon?”

“Was always kinda partial to Roy Rogers actually,” McClane replies. “I really like those sequined shirts.”

“Do you really think you have a chance against us, Mr. Cowboy?” says the terrorist.

But who “created” ISIS? An inept government led by Clinton as secretary of state, U.S. President Barack Obama and even ex-Republican president George W. Bush, who Trump argues, all allowed ISIS to form after the ill-fated invasion of Iraq and then grow to its current monstrous size.

True or not, it’s an easily understood narrative.

That’s Trump’s brilliance: however much one might be revolted by his behaviour, on key issues he is crystal clear, simple and unequivocal.

“Popular culture spotlights a clear appetite for bad behaviour as a way of building trust among a public that has become cynical about their leaders,” says Princeton University history professor Julian Zelizer. “In an era when so many institutions have become broken, from the economy to our politics, we find some kind of comfort in the person, no matter how ruthless, who shows the drive to get things done — no matter what — without letting that brokenness stand in his way.”

“The success of the pop culture anti-hero shows that this country is clearly comfortable with, even enthusiastic about, broadcasting nasty into its living rooms. More than any other candidate, Trump has understood how deeply rooted these feelings have become and he has successfully built an entire campaign around them,” Zelizer wrote for CNN in May. 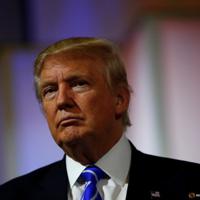 Trump’s Violent Summoning of the Unhinged

“The anti-hero is admittedly imperfect but says what he thinks and does what he wants, consequences be damned. He is not humble, he is not cautious, he is often offensive and He Does Not Care What People Think,” McNamara wrote. “No matter how awful their actions, we love their willingness to acknowledge the dark mutterings of the human soul, their refusal to apologize for their decisions, their desire to win at all costs.”

Clinton, of course, is the status quo, the establishment character with an impressive depth of direct experience, knowledge and ability — and exactly the kind of “inside Washington” opponent that Trump’s pop culture, anti-hero persona disdains.

So the ballot question has become whether Americans put more faith in electing a president with an easily understandable but effectively fictional campaign plan to be an anti-hero versus a traditional candidate with actual skills.

And whether Trump triumphs or trails, this anti-hero campaign will not be the last.