Sitting in the House of Commons’ question period as MP for Toronto-Danforth in the fall of 2013, I could not believe my ears.

The leader of the (then) opposition Liberals, Justin Trudeau, had just used his lead-off question to congratulate then prime minister Stephen Harper on the Canada-EU Comprehensive Economic Trade Agreement — even without having seen a text. What the... ?

The fawning continued until it became apparent there was no text and the Conservatives were playing fast and loose with the state of negotiations, and the Liberals decided to lay low. Giving unconditional support to a non-existent agreement was hard to explain.

But, with time, the Liberals sought to change the channel. Trade critic (now minister) Chrystia Freeland started complaining she and Trudeau had not seen the text and demanding it be produced.

Of course, Freeland never expressly said “I want to see the agreement that my leader and I already support sight unseen.” She left that out, relying on the public’s amnesia and media compliance.

The point of this scene-setting is to remind us all of the serious consequences of Conservative-Liberal support for regressive international economic agreements — Trojan horses in the battle for global expansion of corporate rights in the name of “trade.”

The Liberals are back at it.

Spinning tales about the CETA deal

In mid-September, Freeland headed out on what was presented as a rescue mission to save a “progressive” trade deal left in jeopardy by the Harper government’s inattention to CETA’s problems. The Canadian Press reported that she had been “trying to address concerns over matters such as labour rights, environmental standards and investor-state dispute settlement rules.” In the last week, Freeland’s focus on her own disappointment and efforts has projected a sense of a noble mission fallen short due to Europe’s spurning of a country sharing its progressive values.

Indeed, according to Freeland, European Union “incapacity” is to blame for any failure that results from tiny Wallonia’s ongoing resistance to CETA. Freeland, holding back tears, went so far as to castigate Europeans for failure to do a deal with “nice” Canada.

This is all very rich.

Based on a European negotiator’s briefing to NDP MPs during CETA negotiations (the Harper government refused to brief MPs), it was Canada that insisted on some of the most regressive and dangerous provisions in CETA.

The provisions in question were — and still are — the investor-state dispute settlement (ISDS) procedures. This part of the treaty takes CETA’s interpretation and, ultimately, enforcement out of the hands of national courts and places it in the hands of arbitrators.

Why should this cause concern?

Investment-treaty arbitrators work in a world of groupthink that reflects the agreement of the elites of both states and corporations on neoliberal ideology: the freer corporations are to invest and make money without cross-border fetters, the better.

The chances of fair, let alone progressive, implementation of economic agreements like CETA are seriously limited by this shared ideology. As a consequence, the efforts of legislatures and governments on a range of fronts — from health policy to environmental policy to local procurement rules (such as for labour and agriculture) — are placed at risk by a heavy slant in favour of a corporate-rights view of the world.

And state elites, as well as corporations, like it this way.

This includes not only states with governments who think like our Liberal and Conservative parties. It also includes the (few) states like France with socialist or social-democratic governments that have accepted, over decades, the EU’s vision of the unadulterated virtue of “economic integration.”

The European Union acts as a superstructure above and beyond the democratic sovereignty of its members and has embraced neoliberalism. Sparing acceptance of some pan-European progressive social policies has not changed its raison d’être. How soon we forget that Brexit was as much about this reality and an associated belief in resuscitating democratic sovereignty in the face of top-down economic forces as it was about xenophobia and nativism.

So, let us now return to the Liberals’ narrative around CETA — namely, that they successfully pushed for changes to the agreement negotiated by the Harper government.

They did not. If Europe had wanted CETA exactly as the Conservatives had negotiated it, there is no evidence the Liberals would have done anything but take the deal — and the Conservatives’ and EU neoliberal consensus underlying it — and run.

Rather than pushing Europe for more progressive changes to CETA, the Liberal government accepted concessions reflecting progressive concerns because Europeans — supported by Canadian policy activists — were pushing for the trade deal to be relegated to the rubbish heap of history.

The truth is that European social movements and concerned social democratic and Green politicians pushed back on the provisions Harper wanted — and that the Liberals were 100 per cent behind, as evidenced by the support Trudeau gave Harper back in the fall of 2013.

Europeans’ resistance stemmed, and still stems, from the dispute settlement provisions, alongside concerns that CETA provisions (such as those on government procurement and pharmaceuticals) were written in a way that will be license for corporations to sue governments and for arbitrators then to interpret them in a way that favours corporate interests.

All that said, it’s not just Canada that wants CETA to be adopted immediately with the flawed ISDS provisions at its (cold) heart.

EU bureaucrats and politicians, and their counterparts in member states, also see this as a race against time. They know that concerns about the agreement are not simply based on the “local concerns” of Wallonia, as the media has been duped into reporting.

The EU knows, for example, that a parallel organization of European member states, the Council of Europe, is starting to express concern.

What is the Council of Europe? Home of the European Convention on Human Rights and the European Social Charter, both of which date back more than half a century, the council is in some ways the institutional conscience of Europe. Seeking a more human rights oriented evolution of Europe, it has long offered a competing vision to that of the EU.

A committee of the Council of Europe’s Parliamentary Assembly issued a statement Oct. 13 expressing concern that CETA could “bring into force (with immediate effect) new powers for transnational investor companies to sue EU member states for laws they pass which affect investor profits, including those designed to protect public health, the environment and workers’ rights.”

In addition, the council has scheduled a full Parliamentary Assembly debate for Jan. 17 on “human rights compatibility of investor-state arbitration in international investment protection agreements.”

Members of this Parliamentary Assembly have a record of refusing to roll over and play dead in the face of realpolitik in interstate policy. For example, without Council of Europe parliamentarians, the nature of the U.S. CIA’s post-9/11 torture network would likely never have been revealed.

In a context where the EU’s structure gives limited power to members of the European Parliament, which is in any case dominated by mainstream parties, we should fight to ensure this Council of Europe debate takes place on Jan. 17. The debate — and the parallel debates that can continue in European society between now and then — will heighten awareness of the stakes and of the further changes to CETA that are imperative.

Parallel to this awakening within the Council of Europe, knowledgeable Canadian academics have stepped into the breach. Knowing the Liberals are not pushing for a more progressive CETA but rather resisting this, these scholars have reached out to Wallonia — and, through Wallonia, to Europeans.

In an Oct. 17 open letter to the Parliament of Wallonia and Belgian voters, 10 academics from across Canada note “the scare tactics employed by Canadian politicians and business representatives in an effort to influence your legislative and government processes.”

The letter also points out the transnational corporate agenda represented by the Liberal-Conservative agenda. “Business spokespersons who have defended these concessions of Canadian democracy and sovereignty often represent foreign companies in Canada or Canadian companies that may own companies abroad and be interested in bringing claims against Canada,” it says. 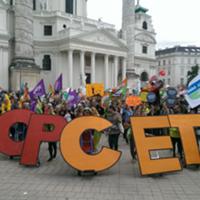 Finally, as well as concerns about CETA’s constraints on public policy, the academics warn “the ‘investment court system’ in the CETA does not remove the financial threat posed by foreign investor claims to democratic regulation.” They argue that CETA contains an “unjustified and gross favouring of foreign investors over anyone else who has a conflicting right or interest,” made worse by the fact that CETA “does not establish a proper court with the usual safeguards of independence and fairness.”

Like these Canadians seeking to bolster Europeans’ understanding of the ramifications of CETA, we must all wake up to the threats to democracy represented by the agenda too many aspects of CETA are seeking to entrench.

Carefully constructed, progressive trade agreements are to be supported, but not the anti-democratic agenda and the dominance of narrow economic logic of the current CETA. The Liberal-Conservative alliance’s deep desire for corporate-rights pacts under the umbrella of “trade” is the wrong direction for our collective future.

How soon we forget the sources of the dislocations and felt inequality that led to part of the alienation that produced Brexit, to Bernie Sanders’ insurgent campaign to win the U.S. Democratic Party nomination and, it has to be said, to a chunk of the resonance Trump has been able to exploit so cynically.

Have no doubt that the present Canadian government is keen to resist truly progressive revisions to CETA.

Have no doubt that Liberals want to retain a flawed ISDS system that undermines the democratic sovereignty of countries — and one that sets the wrong example for future trade policy.

All this is far from the “real change” promised by the Liberals in the last election. It is, rather, the continuation of a Liberal-Conservative tag team pushing old-style economics that are the path of the past not of the future.

It’s time for the New Democratic Party to lead on this issue in the House of Commons.

Only NDP MPs (with the Green Party’s Elizabeth May in support) can act as the real Official Opposition, for here, as on so many other issues, Liberal equals Conservative.