(Author’s note: This is a work of satire. References included in the text are spurious. Links to news articles are, however, legitimate. Predictions are not certain, and those named are of course blameless for events that may or may not happen.)

From a paper at the 10th Annual Conference on Global Patterns of Income Disparity in the First half of the 21st Century. April 4, 2040. Cleveland Ohio. Edited for brevity and to (slightly) reduce academic jargon.

Recently, there has been renewed interest in how the much-maligned “Vancouver Region Bantustan” policy of geographically planned housing inequality gained widespread acceptance and rapid execution. For those unfamiliar with Vancouver history, the term “bantustan” was eventually applied to these distinctive Vancouver-area developments for their similarity to the South African urban planning program used during apartheid to separate the largely poor black suburban workers from the largely white wealthy urban elites.

It may seem hard to believe, but at the time when this Vancouver regional planning policy was conceived, the plan to radically segregate the region by income, age, occupation and class was not terribly controversial, especially since it had been previously famous for just the opposite: equal access to affordable housing, civic amenities and well-paid jobs – crucial elements of the 20th-century “Livable Region Strategic Plan” (discussed in greater detail below).

It is now felt that in the second decade of the 21st century, various political and economic forces conjoined to make an abhorrent policy – and one that digressed so markedly from political tradition – seem a rational response to the raging “housing crisis” of the time. The year 2016 is generally acknowledged as the year of “the great public policy mistake” (Disparage and Grouse, 2023). In that year, the provincial government, desperate to shift attention away from its failure to make citizens rich from liquefied natural gas as promised in 2012 (see this quote, “What would you do with a trillion dollars?” by Liberal party outreach director Pamela Martin, 2012), performed a dizzying political pivot toward an issue they had long ignored, but which now might save them: housing affordability.

The shift was indeed dramatic, as evidenced by B.C. Finance Minister Michael de Jong’s flip-flop, from opposing any action that might slow the flow of international investment to precipitously enacting a 15 per cent foreign purchase tax to stop it cold. Prior to his change of mind, de Jong appeared unmoved by a spectacular 40 per cent gain in year-over-year prices for Lower Mainland detached homes.

As events unfolded (see Smite and Ruen, 2020) the tax was a calamitous failure, leading to local court challenges and, most significantly, to conflicts with the court of the North American Free Trade Agreement. Little discussed at the time, this would become a fatal error, as American property investors quickly invoked Article 1102 of the NAFTA treaty. Known as the “national treatment clause,” this article requires all North American investors (Canadians, Americans, and Mexicans), whether individuals or corporations, to be treated equally. The 15 per cent tax was eventually removed after NAFTA courts imposed financial penalties on British Columbia in excess of the revenue generated by the new tax (Uops and Mouns 2018); but not before the BC Liberal Party was rewarded by the voters with yet another election mandate.

The tragic imposition of the foreign buyer tax paralleled, and in some ways obscured, the second crucial 2016 policy shift. It was this policy shift that led directly to the creation of the Vancouver bantustans. Provincial officials, in the midst of what they still considered to be a fight for survival (Yelp and Paine, 2019), searched frantically for a policy that might not just reduce housing demand (as their 15 per cent tax was intended) but also dramatically increase housing supply – especially for those B.C. residents between the ages of 20 and 40 who were almost entirely shut out of the housing market.

In this state of political disarray, provincial officials sought council from their advisors, most notably real estate magnate Bob Rennie (at that time chair of fundraising for the BC Liberals). It was Rennie who, on June 2, 2016, famously spoke the phrases that would soon become the basis for the bantustan plan. Speaking to a group of developers, he said: “We cannot solve affordability if we only look at the city where the 650,000 live [in Vancouver], but maybe we can where the 2.5 million live in Metro Vancouver.” Later in that same speech he sketched out notions that, when elaborated and implemented, became the urban planning principles that spawned the Vancouver bantustans:

1. The principle of segregation by age and income -- based on the notion that Vancouver is no longer affordable for those between 25 and 40 (known as “millennials”), so they must look elsewhere for housing.

2. The principle of creating discrete districts to house millennials, later called bantustans, clustered around transit stations -- based on the notion that Vancouver workers need not live in the city they work in if they lived above and near “SkyTrain” (the colloquial name given to the regional transit system) links to the centre city.

3. The principle of making the residents of the bantustans pay to build the transit that joined them to the wealthy centre city through charges tied to the purchase price of their small homes -- based on the notion that income and property taxpayers should not have to pay for the system but bantustan residents should, through development cost charge taxes included in the purchase price of each new unit. 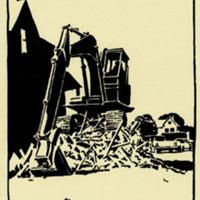 Many have asked how could regional leaders of the time condone placing such a large burden on one age and income class? In order to understand why, we must project back to a time when millennials were virtually closed out of the housing market, and also acknowledge that economic apartheid in the region was, by 2016, already well advanced.

By this time billions of dollars had already been invested in a regional transit system that many had criticized for its expense, its meagre reach, and its consequent lack of utility for most residents. Public displeasure with the expense and deficiencies of the transit system led to the defeat of a “regional transit plebiscite” held in the spring of 2015 (Travail and Thicke, 2017). This proposed $7-billion regional transit plan, $5 billion of which was to be spent in just two of the region's 21 municipalities (surface rail in Surrey, and a subway extension of the SkyTrain system in Vancouver), was defeated in a landslide, losing even in both cities that were to gain the most from the plan.

At this point the very machinery of regional development, so long assumed as assured, became threatened. For decades the region’s leaders had been following a plan spawned in the last half of the 20th century called “The Livable Region Strategic Plan” (LRSP). This plan anticipated the development of a constellation of high-density nodes scattered throughout the region called Regional Town Centres. These were planned as economically and income-diverse centres that would be connected by rapid transit. In time, construction of the SkyTrain system was initiated to complete these links.

Unfortunately, and largely due to the expense of the transit technology chosen (automated driverless mini metro light rail – a now defunct technology), the expansion of these rail links proceeded much slower than anticipated (Tardy and Slugg, 2021), a situation brought to full-on crisis by the failure of the plebiscite. During this same period, housing prices in the centre city spun out of control, exacerbating what was already an inequitable and regionally segregated housing situation, rendering moot the LRSP’s housing equity ambitions. Confronted with these factors, one can at least feel some empathy for the business and policy leaders of 2016, desperate for a solution to the housing crisis, and forgive them for their blindness to how odious their decisions would come to seem.

The die was fully cast when, in the fall of 2016, the province made an unprecedented move. It declared that it would alter the Municipal Act to force all regional municipalities (outside of unaffordable Vancouver) to dramatically increase the allowable density within an eight-minute walk circle (600 metres) of SkyTrain transit stations. In addition, it declared that Development Cost Charge taxes, a tax attached to the purchase price of each unit, would be substantially raised and no longer used for local infrastructure (school site, community centres, roads and bridges, etc.) but instead committed to the expansion of the regional rail system (a system which would in time be commonly referred to as the “Bantustan Express”). Restrictions on building height and maximum FSR (floor surface ratio, a measure of density) would be completely eliminated, in deference to what were then felt to be “market dictates.”

What emerged from this calamitous strategy is now clear. Visitors to Vancouver can experience the daily migration of low-wage earners back and forth from peripheral bantustan sites to service jobs in the centre city. The economy of the centre city is now largely devoted to tourism, movie backdrops, and retirement homes. Most of the centre city rental stock has been taken over by Air BnB, while the largely depopulating landscape of single family homes in the RS-1 zoned areas are still unavailable to salaried families with children. This has left Vancouver schools empty or repurposed as senior centres.

Meanwhile back in Burquitlisan, Coquitlistan, Moodystan and Burchlandistan, high-density settlements swell with occupants at night but are abandoned during the day. “Affordable” units in these districts average 640 square feet for a two-bedroom unit with poor sound separation between adjacent homes. School sites set aside for bantustan families have yet to fill, as birth rates in these communities stay stubbornly low, likely as a consequence of persistently low wage rates (sadly, Vancouver wages, the lowest in the nation since at least 1990, did not improve over the decades [Stiffe and Ewes, 2038]). Part of the problem seemed to be the expensive burden placed on real estate to pay for the transit system, and the resulting high relative cost, small size, lack of open-space amenities nearby, and poor interior and exterior finishes, of units supplied.

It is an undoubtedly sad result; but there are still those who defend it. While all regret the loss of what was once North America’s shining star of equitable city and regional planning, given the unalterable forces impacting the city most still argue that any other action would have produced an even worse result. However, there are many who still suggest that alternatives were indeed available, alternatives that would have been cheaper, more equitable, and more in tune with the organic and historical development of the region. One of those “paths not taken” will be reviewed in the next edition of this conference proceedings (Condon and Condon 2016).