"Moreover, you must refrain from thinking controversial thoughts out loud, especially when the facts are far from certain." -- Ex-UBC board chair John Montalbano to ex-UBC president Arvind Gupta in May 24, 2015 letter 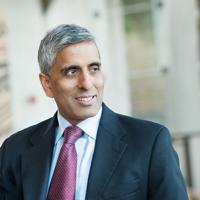 If that scientist were Galileo Galilei in 1615 saying out loud that -- contrary to popular and Catholic Church belief -- the earth revolves around the sun, he would face the Roman Inquisition to defend his views. And be proven right in the end.

But 400 years later in 2015, that man was Arvind Gupta, president of the University of British Columbia.

And his inquisition came from the executive committee of UBC's board of governors -- most appointed by the BC Liberal government -- who apparently pushed him to resign just a year into his five-year term.

New documents released last week -- some accidentally -- are the first true indication of what really happened. And like an inquisition, Gupta's accusers were powerful and relentless.

Gupta is now speaking out due to those documents going public, saying he regrets his resignation, but not fully disclosing his views.

But unlike Gupta, neither Premier Christy Clark nor the man directly responsible for UBC -- Advanced Education Minister Andrew Wilkinson -- have yet explained how their own hand-picked appointees and major party donors moved to oust B.C.'s largest university president. Or if Clark or Wilkinson approved the board gunning for Gupta -- and why.

While Wilkinson has said it was merely "a matter between the board of governors and their employee," when the head of a $2.1 billion public institution with 60,000 students dramatically disappears, they have a fundamental obligation to explain why their governors pushed out the president -- and whether they authorized it.

And there is no way such a dramatic move could come without their knowledge and at least acquiescence -- it's too big a decision.

Fortunately, when the B.C. Legislature resumes Feb. 9, opposition members can question Clark and Wilkinson directly, including in budget estimates -- though whether real answers will be given is doubtful.

Nonetheless, here are some that should be posed:

What communications did then-UBC board chair John Montalbano or other governors have with Wilkinson, Clark or their senior staff regarding unhappiness with Gupta?

Did Wilkinson or Clark approve Montalbano and some UBC governors' attempt to force Gupta to significantly change his course?

Did Wilkinson or Clark authorize UBC governors to push for Gupta's resignation when unsatisfied?

And perhaps most intriguing, could Wilkinson and/or Clark have been misled in what they were told about Gupta's performance so that they agreed to the purge?

Gupta was clear in interviews last week what he thinks of the UBC governors who forced him out: "This group had only one intention. They decided they didn't want me."

Indeed, Gupta is correct based on the now-released letters from then-chair Montalbano.

The tone of the letters is shockingly critical, if not insolent and insulting towards the president, regardless of any failings on his part.

The letters reflect Montalbano's observations on behalf of the UBC board of governors' executive committee following their meetings with Gupta.

"We appreciate that you have come to understand that you have some key deficiencies in your leadership style that must be addressed," Montalbano writes May 24, 2015. "To be completely transparent with you we are still not certain that you fully appreciate the scope of your accountability."

"The board has noted that your first year as leader of the University of British Columbia has been an unsettled one. Relationships with key stakeholder groups, notably your senior executive, the faculty deans and the board of governors are not at functional levels to allow you to move forward in a confident manner -- unusual even for an organization undergoing strategic shifts in vision and key personnel."

"Communication of change and strategic vision has been poor. The executive committee of the board has witnessed a degradation of quality in the communications from the president's office and executive in the past number of months," Montalbano continued.

Not only were Gupta's style and approach trashed but so were his staff.

"We are deeply concerned that your office is not providing you with the information you need on a trusted and timely basis," Montalbano wrote.

"We are also very concerned that your office is not only inexperienced and perhaps under resourced but that certain members of your team do not reflect well on the tone that the office should wish to establish with stakeholders on and off campus."

And while some board members are experienced business people, none of them has the kind of academic background Gupta brought to the job.

If the letters were presumably more cautious than unrecorded verbal meetings between the governors and Gupta would be, exactly how nasty were those conversations telling UBC's doomed president that he was allegedly incompetent? Only those there could say -- and they aren't talking.

What is clear is that Gupta was shaking up long-established fiefdoms at UBC, which can be more medieval and treacherous than Game of Thrones. Some faculty deans and senior administrators were threatened by Gupta's reforms -- and they didn't take it well.

Gupta told The Ubyssey student newspaper last week that he became aware that opposition to his changes at UBC was being fed secretly to the board.

"In the summer, I began to realize maybe there was some back channels developing where some of the people who were uneasy about this direction were back-channeling into the board about what they were saying," Gupta told the paper.

But ultimately that back channel of opposition turned the tide against Gupta.

The UBC executive committee may have also underestimated -- or ignored -- the impact of Gupta's departure within the influential South Asian community in B.C. and beyond.

The Indo-Canadian Voice has followed Gupta's resignation closely, noting in an editorial last week that: "now letters that appear to have been released by an oversight seem to show that Gupta was pushing for change in an institution that was too dinosaur-like in its reaction."

While many dismissed UBC professor Jennifer Berdahl's early analysis that Gupta was the victim of a "masculinity contest" as over the top, others may think differently as more documentation of the situation comes out.

"I believe that part of this outcome is that Arvind Gupta lost the masculinity contest among the leadership at UBC, as most women and minorities do at institutions dominated by white men," Berdahl wrote in August 2015.

"President Gupta was the first brown man to be UBC president. He isn't tall or physically imposing. He advocates for women and visible minorities in leadership -- a stance that has been empirically demonstrated to hurt men at work."

'Traits of a humble leader': Berdahl

Montalbano told Gupta that: "Because there is a low level of trust among those that work most closely with you morale is low. You are rarely seen to solicit or seek advice from those best positioned to support you. You are deemed too quick to engage in debate in a confrontational or dismissive manner, which is demoralizing to a group of executives in fear of their employment."

But Berdahl observed the opposite behaviour by Gupta, she wrote.

"I also had the pleasure of serving on an executive search committee he chaired. In leading that committee he sought and listened to everyone's opinions, from students through deans," Berdahl said.

"He expressed uncertainty when he was uncertain and he sought expertise from experts. He encouraged the less powerful to speak first and the more powerful to speak last. He did not share his own leanings and thoughts until it was time to make a decision, so as not to encourage others to 'fall in line.'"

"In other words, he exhibited all the traits of a humble leader: one who listens to arguments and weighs their logic and information, instead of displaying and rewarding bravado as a proxy for competence," she concluded.

Quite the contrast -- and clearly completely contrary to Montalbano and his committee's views -- which could well have been communicated to Clark and Wilkinson in justifying the decision to push Gupta out the UBC door.

And after Montalbano made the astonishingly bad decision to personally call Berdahl to complain about her blog post, the UBC chair was forced to leave his position over concerns about academic freedom -- perhaps a touch of poetic justice.

But Montalbano's departure hardly changes the fact that like in Shakespeare's play Hamlet -- something is still rotten in the state of Denmark.

And as Gupta now haunts UBC like the murdered King Hamlet's ghost, Clark and Wilkinson must know that there will be no resolution to this power play until the truth is told.