Eight months ago, a hiker and friend of our organization found new surveying tape in the central Walbran Valley. There, centred around the iconic Castle Grove, stands one of the largest intact tracts of unlogged old growth rainforest on southern Vancouver Island. 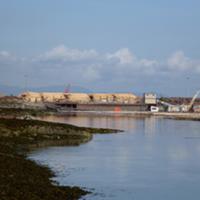 The area was ground zero for B.C.'s war in the woods more than 20 years ago. Grassroots action swept the province and saved ancient forest in the nearby Carmanah Valley and in other parts of the Walbran.

Surveying tape usually signals new cutting, so I contacted Teal Jones, the logging company that holds rights to the area, and asked them about their plans. To my surprise, they got back to me -- they even vowed to work to incorporate my concerns in their logging plans. This was a huge departure from the typical communications with logging companies active on Vancouver Island.

In a series of emails that lasted months, I highlighted the scarcity of forests of this quality and scale, the importance of these ecosystems, and the value of standing old-growth. I sent Teal Jones maps that highlighted the most ecologically sensitive areas -- our ''no-go zone'' for logging.

Just last week, Teal Jones sent us their plans, confirming eight new cut blocks immediately surrounding the Castle Grove. All eight fall in our top priority area for maintaining ecological integrity. This is the most sensitive part of the valley -- a strip of primordial forest between the Walbran River and the boundary of Carmanah-Walbran Provincial Park.

Forests like this provide habitat for species at risk, including the marbled murrelet and red-legged frog. They purify water and supply cultural resources and medicines used by indigenous people now and since time immemorial. They also provide space and opportunity for recreation and tourism, and sequester more climate-changing carbon than younger forests.

We've already lost the staggering majority of old-growth forest on Vancouver Island and across B.C. At low elevation, less than 10 per cent of the original forests remain intact.

Our request is not a radical one. The tree farm managed by Teal Jones is over 99,000 hectares -- the area we're asking the company to leave alone is just 486 hectares. That's less than 0.5 per cent of the area available for them to harvest. Old-growth logging needs to be banned province-wide. But until that happens, we need to protect heritage groves like those in the central Walbran Valley.

Teal Jones is explicitly choosing the route of conflict with their current plans, but the B.C. government has the power to stop it. We'll be mobilizing our members and supporters to urge the premier and her ministers to do just that.

A few months ago on the trail into the Castle Grove, I spoke with a couple camping out in the old-growth with their daughter. The pair had met when they -- and many others -- were arrested for blockading on the bridge over the Walbran River in the early 1990s.

I know there are legions of people willing to turn that bridge into this year's Burnaby Mountain -- if that's what it comes to. We'll be back in the Walbran throughout the summer, surveying Teal Jones' cut blocks and spreading the message that this place is simply too special to lose.

Grassroots action has worked to protect these forests in the past, and we believe that it can again. The nearby Carmanah Valley was slated for clear-cut logging in the early '90s, but after extensive campaigning by the Wilderness Committee and others, the government of the day protected the Carmanah Valley, and later, part of the Walbran.

The lack of a coherent strategy on old-growth in B.C. does not mean the provincial government can sit by while some of the last of it is liquidated for private profit. The government must step up and head off this conflict.

We should all be working together to build a forest industry that provides the sustainable jobs forest communities need, includes the First Nations who have been largely excluded in the past, and respects the environmental limits of these ecosystems. And our government needs to recognize that any remaining old-growth is more valuable as standing forest than as wood products.

It's time to finish this work and find a solution that protects this amazing forest for future generations in a way that also ensures access to traditional resources for First Nations.

That won't be possible if the heart of the Walbran Valley is cut to pieces.