"The pit bull just snapped and decided to kill my daughter. I didn't know what would have happened if I wasn't there -- it would have ripped her to pieces." -- Mother of six-year-old girl attacked by a pit bull in Vancouver on Jan. 1, 2015 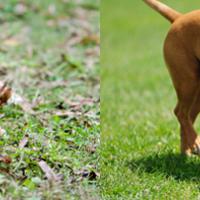 A six-year-old girl was viciously attacked and wounded by a pit bull in Vancouver's Crab Park on Jan. 1, while a small dog died Feb. 6 in a separate pit bull attack in Surrey's Holland Park.

The Tyee has spoken to both the girl's mother and the owner of the severely wounded dog that was euthanized following the Surrey attack.

The two women contacted me separately after reading my columns describing other recent pit bull attacks in British Columbia and calling for a B.C. ban on pit bulls, similar to those in Ontario and Winnipeg.

Ontario's ban forbids breeding and import, and requires dogs to be neutered and muzzled in public.

Both women, who wish to remain anonymous for privacy reasons, now support a ban. Their stories have not been previously reported until now in The Tyee and 24 Hours Vancouver.

The Vancouver attack was confirmed yesterday by the Vancouver Police Department, who said that "no criminal offence" occurred and that the investigation was turned over to the City of Vancouver Animal Control.

In an interview yesterday, the six-year-old's mother said that the attack by an off-leash pit bull came without warning and resulted in severe bite wounds to her daughter's face and leg, resulting in a trip to the hospital by ambulance.

The woman asked not to be identified to protect her daughter's privacy.

The girl's puncture wounds required 10 stitches to her leg and another four to her face, her mother said. The girl was traumatized by the unprovoked attack and is now in therapy, she said. 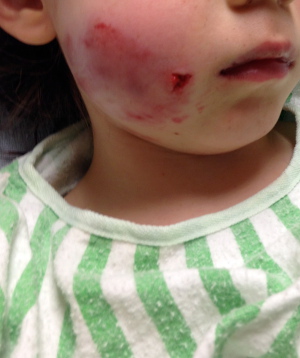 Facial wounds on six-year-old attacked by pit bull in Vancouver. The girl required 10 stitches to her leg and another four to her face. Photo provided by girl's mother, who asked not to be named.

The two-year-old pit bull that attacked the girl has not been put down. Instead, it was returned to its owner with restrictions that it be muzzled and kept on-leash in public.

"We were leaving the playground when I looked back and saw the pit bull barreling towards us," the mother said. "It jumped right on [my daughter] and knocked her on her back -- it blindsided [her] from the side -- she didn't see it."

The dog sank its teeth deep into the young girl's leg, and her mother sprang into action. "I punched the pit bull in the face -- pure adrenaline -- it was like a shark, it was insane, like a beast!" the mother said.

The dog's walker -- not its owner -- immediately helped pry the pit bull off the girl, but then the dog "lunged and bit [the girl] in the face and clamped on," the mother said.

The dog's grip wasn't as tight, and the mother managed to free her screaming daughter as police and ambulance paramedics arrived to take them to hospital.

The mother, a beagle owner and dog lover, now believes that pit bulls "should be banned in B.C. like they are in Ontario."

In another incident on Feb. 6, a woman named Sandy (last name withheld for privacy) was walking her Maltese Lhasa Apso dog Cleo in Surrey's Holland Park.

"My dog was on her leash beside me and attacked suddenly without warning by a pit bull that grabbed Cleo," Sandy told me Sunday. "The pit bull's jaws had enough time to do serious internal damage."

After she and passersby helped rescue Cleo from the unleashed pit bull, she took her bleeding dog to a veterinarian, but the 16-year-old pet's injuries were so severe it had to be put down immediately.

Sandy called police and Surrey Animal Control, who told her they captured a pit bull on the loose that evening with no tags and it was euthanized last week after no owner came to claim it.

"I think it's time to basically ban pit bulls," Sandy said. "I love dogs -- don't get me wrong -- but I really believe in banning. It's the unpredictability that does it."

Other attacks on record

The two incidents are part of a growing list of pit bull attacks in B.C. that mirror American statistics showing pit bulls to be the most dangerous breed for both fatalities and violent attacks.

In the U.S., advocacy group DogBites.org reports there were 27 fatal pit bull attacks in 2014 alone -- 64 per cent of the total fatal dog attacks. There were 25 pit bull fatalities in 2013, which accounted for 78 per cent of all dog attack deaths that year.

As previously reported, a 16-day-old baby was viciously attacked in her own Saanich home by the family's pitt bull-Rottweiler cross in Dec. 2014, suffering serious lacerations that required extensive plastic surgery.

Also in December, a six-foot five-inches man weighing 250 pounds was mauled by two pit bulls outside a Langley store, requiring 19 stitches, after he said "Hi, pups" to the pair. They were tied to a mountain bike, which they dragged behind them to get at their target.

And in Nov. 2014, a miniature pinscher therapy dog was literally disemboweled in front of its shocked owner outside a Kitsilano post office by a sudden, unprovoked attack by another dog.

The six-year-old's mother read about those attacks before contacting me, and made clear that she wasn't initially concerned when she entered Crab Park, which has an off-leash dog park with a playground adjacent. She said there's a sign stating that dogs must be on a leash within 15 metres of the playground.

"We saw a pit bull off leash -- I've seen them more often, so I've gotten less afraid of them," she said. But then came the frightening attack that left her daughter with multiple stitches and a "face swollen like a grapefruit."

The mother said her daughter now "doesn't want to walk our dog or go to the park because she's afraid of the other dogs." She wants the city to either fence off the kids' playground from the dog park, or remove the playground to ensure no future attacks take place.

While the mother said the pit bull's walker -- who told her he was taking care of the dog while its owner was in Toronto -- was responsible and did all he could to end the attack, she has consulted a lawyer about potential legal action.

"I don't think people's dogs should be taken away, but pit bulls should be banned in B.C. like in Ontario," she said.

Similarly, Sandy has re-thought her views on pit bulls since her dog Cleo was fatally attacked.

"Before this happened to me I thought it was the owners' fault, but I've seen so many stories now... pit bulls have been bred for centuries to fight and not back down," she said.