"We have to invest. It's come to that point. This is the session. This is the Armageddon. This is the Super Bowl. This is it. And it's gotta happen this year." -- Washington state superintendent of public instruction Randy Dorn 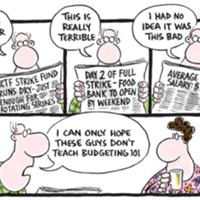 Should Teachers Be Satisfied?

Picture this education imbroglio: the Supreme Court rules that funding for Kindergarten to Grade 12 students is completely inadequate and must be remedied immediately with an infusion of billions of tax dollars every single year -- or else.

Then, after legislators drag their feet to find the money to hire thousands of teachers and staff and provide more resources, a visibly angry Supreme Court reconvenes to find the government itself in contempt of court.

Then, the judges give the government just one legislative session in 2015 to fix it or face extraordinary, court-imposed financial and other penalties.

The government is also ordered to reduce the number of students per overcrowded classroom to improve learning conditions. That means hiring 7,400 new teachers and 17,600 other education staff, at a cost of nearly $5 billion through 2019 and $2 billion a year after that.

It may sound like a wonderful dream for B.C. teachers after their lengthy 2014 strike.* Currently, they're waiting for an upcoming B.C. Court of Appeal case decision on class size and composition after a hearing in Oct. 2014.

But in Washington State, it's Governor Jay Inslee's absolute reality.

Not only did the Washington Supreme Court find in 2012 that constitutional provisions providing students with an appropriate education were not being met and must be restored, but in Sept. 2014 it scathingly ruled unanimously that the government was in contempt of court for refusing to fulfill its court-ordered remedy.

Washington State "is engaged in an ongoing violation of its constitutional duty to K-12 children" and it "has known for decades that its funding of public education is constitutionally inadequate," the Supreme Court found in its contempt decision.

Now, Washington State Democrats and Republicans alike must resolve the education funding issue in their current 2015 session in the capital, Olympia, or face withering court sanctions.

And it gets even better for teachers and students, because in November, Washington voters narrowly approved state initiative I-1351 to lower the student-to-teacher ratio to 17 to one for Kindergarten through Grade 3 from the current average of 24 to one in elementary schools, and to 25 to one from 30 to one for Grades 4 to 12.

That measure is unrelated to the Supreme Court order, and will cost an estimated $2 billion more a year to hire 7,400 new teachers and thousands more support staff in the schools.

So, what's the lesson?

There is a lesson from Washington for the government of British Columbia: the best solution in the face of a potentially devastating court order to spend billions a year more on education is a negotiated agreement with the BC Teachers' Federation.

Clark should see that Washington's dilemma is a harbinger of B.C.'s possible future, and start talking to the union now rather than answer to an angry Supreme Court of Canada down the road.

The alternative for Clark is to find herself in the shoes of Washington State Democratic Governor Inslee.

"This unprecedented action by the Supreme Court is a critical moment in our history," Inslee said last September. "No one should be surprised, yet no one should minimize the court's order.

"I urged lawmakers to act this year and agreed with the court that we must do more to adequately fund education, which I believe is both a constitutional and moral obligation," he concluded.

Tom Ahearne is a Seattle attorney who acted for plaintiffs complaining in the 2012 case that the state is not meeting its constitutional obligations.

"All the excuses [legislators] tell themselves that they can delay and no one has to do anything, these are now gone," said Ahearne, who represented parents Stephanie and Matt McCleary, lead plaintiffs for a group that also includes Washington's largest teachers' union, school districts and education advocates.

Ahearne isn't joking. The Washington Supreme Court ruling could not be clearer:

"The court has no doubt that it already has the legislature's 'attention.' But that is not the purpose of a contempt order. Rather, contempt is the means by which a court enforces compliance with its lawful orders when they are not followed," the court decision reads.

"These orders are not advisory or designed only to get the legislature's 'attention'; the court expects them to be obeyed even though they are directed to a coordinate branch of government. When the orders are not followed, contempt is the lawful and proper means of enforcement in the orderly administration of justice," the ruling signed by Chief Justice Barbara Madsen warns.

BC should pay attention

It all sounds very much like B.C. Supreme Court Justice Susan Griffin's ruling in favour of the BCTF and against the BC Liberal government over its ripping up contract provisions and deliberately trying to provoke a strike in 2011.

"In Bill-22 the government re-enacted legislation identical to that first branch of what was previously declared unconstitutional, namely, the deletion and prohibition of hundreds of collective agreement terms on working conditions," Griffin wrote.

"When legislation is struck down as unconstitutional, it means it was never valid, from the date of its enactment. This means that the legislatively deleted terms in the teachers' collective agreement have been restored retroactively and can also be the subject of future bargaining."

Regardless of how the Washington State situation is resolved by its legislature, one thing is abundantly clear -- education funding is about to go up substantially as a result of the court rulings.

The BC Liberal government would be wise to pay attention and start opening the channels of communication with the B.C. teachers' union to find a negotiated solution to the B.C. Court of Appeal case.

Win or lose, if that case is finally resolved in the Supreme Court of Canada, Christy Clark may wish she was in Washington Governor Jay Inslee's position instead of her own, very expensive B.C. one.