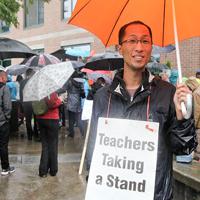 British Columbia's teachers likely went back to school Monday with one of two Rolling Stones' hits in their heads – 86 per cent with "You Can't Always Get What You Want" and the other 14 per cent humming "[I Can't Get No] Satisfaction".

That was the "yes" versus "no" voting breakdown for the deal that ended the BC Teachers' Federation strike, inviting much criticism and spirited defence.

The agreement is complex, with different funds with hundreds of millions of dollars for improvements, a modest wage increase, protection of a BCTF court case continuing and much more.

But is it a good deal for teachers? And are there big improvements for students -- who the BCTF says they struck for?

It is definitely a welcome deal for teachers compared to what has happened in past bitter disputes with government -- legislatively imposed contracts.

Would binding arbitration have offered more? That's a crapshoot with uncertain results that could have gone either way.

Could a continued strike have forced more money from government for teachers and students alike?

Maybe but this was a high-risk, low reward situation, where the consequences of being wrong are horrendous but the win in being right is minor.

But neither give much credence to the threat of an imposed contract at the hands of a government that has twice been found guilty by the B.C. Supreme Court of ripping up contracts, as well as bargaining in bad faith and attempting to provoke a full-scale strike in the last round of negotiations for purely political advantage.

And a government led by BC Liberal Premier Christy Clark, the original education minister in 2002's contract stripping and a strong supporter of private schools, was eager to crush teachers.

Don't forget the government also fired the BC Public School Employers' Association's board of directors, getting rid of elected school trustees involvement and replacing them with a single hand-picked administrator; demanded a 10-year contract; imposed a 10 per cent pay cut for taking job action and was ready to lock out teachers.

This is not a government that plays well with others.

But political hardliners who called for a general strike by other workers to back teachers were dreaming in Technicolor.

Short of the BC Liberals imposing martial law on teachers, other union members were not prepared to give up their pay and risk their livelihoods by walking out to support teachers who were being offered similar terms that others in the public sector had already accepted.

On the plus side, the $105 million grievance settlement fund is effectively a "signing bonus" worth over $2,500 per teacher -- more than the $1,200 signing bonus the government offered in June though less than the $5,000 the BCTF demanded.

The Education Fund, building from $75 million a year up to $85 million, will mean hundreds of new teachers are hired -- a win for students.

Negotiating withdrawal of the government's intended E80 clause -- which would have let the BC Liberals cancel the contract if they lost in court -- was huge.

Improvements for Teacher Teaching On Call compensation are also important for younger teachers starting their careers, as is more preparation time for elementary teachers.

And should the B.C. Court of Appeal uphold the BCTF victory in B.C. Supreme Court -- or if the Supreme Court of Canada do so if it goes to that level -- then the issue of past contract stripping on class size and composition will be resolved at last, to the benefit of both students and teachers.

But did the BCTF make mistakes? Certainly.

Going into a major dispute against a powerful adversary with no strike fund for members is simply astonishing.

And complaints by some that other unions who offered interest free loans should have given their members' own money as grants to the BCTF are hard to swallow.

The loans were a generous move but why didn't the BCTF secure them quietly before the dispute began and/or mortgage their headquarters?

And why did they need them? If nothing else, a significant strike fund needs to be built by the end of this contract.

Timing was also problematic. Going out in June near the end of the school year limited the amount of time to build pressure on the government and frustrated many parents and students.

Staying out for the summer only deprived students needing to take summer school and international students who provide significant funds to school boards – without forcing government to seriously bargain.

Had the BCTF moved to lower its wage and other demands for members it would have effectively put that issue to bed, denying Clark and Education Minister Peter Fassbender the opportunity to publicly bash teachers as in it for themselves.

And it would have focused on the fight for better class composition for special needs students and smaller classes for all exclusively, while a strike deadline sometime in September would have allowed public support to build as a possible walkout loomed.

And expectations created that the BCTF could break the public sector wage settlement pattern reached for over 150,000 other workers – and with a hostile government – were unrealistic, leading to a member letdown on the deal when more money was never in the cards.

But it is easier to second-guess from outside than make decisions in the pressure-cooker inside. The BCTF leadership found a path to collectively bargain an agreement accepted by the overwhelming majority of teachers in extremely difficult circumstances facing an obnoxious government -- and that is a rare achievement that evaded many previous executives.

The reality is that teachers and students didn't get what they wanted but they did get some money, more teachers, no imposed contract, their day in court and the ability to fight another day.

And sometimes you do indeed get what you need.