Canada's dismal record on fighting climate change was brought into the spotlight twice this week -- first with a crucial UN report spelling out the tough task ahead for the world's nations, and second, with the president of France delivering an embarrassing lecture to the Harper government in our own Parliament on Monday. 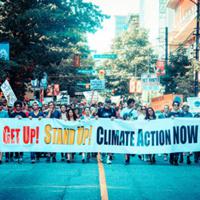 Practically tongue in cheek, French President Francois Hollande, glancing at Prime Minister Stephen Harper, told Parliament that he had no reason to doubt Canada's commitment to reaching a global agreement on climate change when the final round of negotiations are held in Paris in December 2015.

But the president warned Parliament that negotiations must not be left to the last minute.

"We would like to avoid what happened in Denmark, in Copenhagen, where the heads of state and governments thought they could reach an agreement in the very few, last few hours. This is not possible," said Hollande. "We have to find an agreement within the coming months."

Released Sunday, the latest United Nations report on the threat of global warming is by far the most comprehensive to date, and includes the most serious warnings ever. It describes in detail the disaster ahead unless humankind can reverse carbon emissions by 2020 and then phase out emissions entirely by the end of this century.

The Intergovernmental Panel on Climate Change (IPCC) report was prepared to provide up-to-date information for governments attempting to deliver a new global treaty on climate change during the final UN Climate Summit next year.

The looming Paris summit presents a new challenge for the Canadian government in view of the fact that Canada remains, by some measures, the worst performer in fighting climate change of all industrialized countries.

As hinted by the French president, Canada plays a leading role in destroying the atmosphere. Mechanical engineer John Abraham of the University of St. Thomas in Minnesota told Scientific American: "If we burn all the tarsand oil, the temperature rise, just from burning that tarsand, will be half of what we've already seen -- an estimated additional nearly 0.4 C from Alberta alone."

A federal election is scheduled to be held before the Paris summit. Over the next few months, Harper's government will have to decide if it will adopt a more progressive climate change position -- a move that, while unlikely, would probably win the Conservatives votes in the election. If another party becomes the government next October, it would have very little time to develop a new position in advance of the summit.

The IPCC strongly acknowledges that carbon emissions are rising at an alarming rate. While changes in the weather are not having a big impact in developed countries, climate chaos is already causing massive destruction and an estimated 150,000 deaths annually.

Even so, the IPCC report also offers hope. Panel chair Rajendra Pachauri said the world has the means to limit climate change. He said if the right solutions are put into place there can be continued economic and human development.

But considering the overall content of the report -- as well as the harsh information in a number of earlier reports -- it is questionable how much progress can be made because of a number of difficulties that must be overcome.

What must be done

The UN lacks the power to force governments to follow any particular course of action. While UN Secretary General Ban Ki-moon sounds like he is in charge of a solid campaign for change, he's really a concerned cheerleader. Moreover, Sunday's report includes only vague -- and questionable -- suggestions concerning actions that should be taken to slow global warming. It says that:

One ongoing issue that could delay progress concerns to what extent wealthy countries, which are responsible for much of the climate destruction to this point, are willing to assist less developed nations in covering the costs of mitigating the damage caused by climate change.

However, pledges to the Green Climate Fund, which was to raise $100 billion, have been slow to come in, so the UN now hopes governments and the private sector will commit $15 billion as starter capital. The Council of Canadians says the federal government should contribute $4 billion a year to the fund.

A serious issue ahead concerns whether the U.S. and China can reach a bilateral agreement on the burning of coal. If not, some countries may be reluctant to sign onto a binding deal next year.

UN officials fear that U.S. President Obama will not be able to sign a full agreement in Paris because the Senate, with many members receiving large donations from the energy sector, will veto the agreement, and the non-governmental sector is claiming that powerful multinational corporations are trying to hijack the entire UN climate process.

In anticipation of the release of the IPCC report, 55 Canadian environmental researchers and academics came together to urge the Harper government to begin fighting climate change in a serious way.

The group praised work carried out by lower levels of government to mitigate climate change. They pointed out that Ontario is phasing out coal-fired electricity plants and that Vancouver is promising to be the greenest city in the world by the year 2020, but they emphasized the country is lacking overall federal leadership to help co-ordinate such activities.