The 311,000 protestors who took part in the exhilarating Climate Summit march through Manhattan and those who blocked some entrances to Wall Street have returned to their homes. 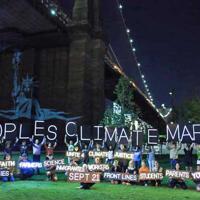 The leaders of the more than 120 nation states that made pie-in-the-sky, non-binding promises for reductions in carbon emissions at the U.N. meeting and dozens of powerful corporations have moved on.

And across Canada and other countries, news about the greatest threat ever to humanity's survival has returned to the inside pages of our newspapers.

But people who strongly believe that Earth is in the initial stages of a downward spiral cannot allow conditions to return to the norm of the past.

A draft of the U.N.'s Intergovernmental Panel on Climate Change (IPCC) Synthesis Report raised new concerns. It said that climate disruption is here, and will dramatically worsen unless something is done immediately -- and that something is on the level of a wartime response.

Because environmentalists are badly losing the battle to keep carbon emissions to liveable levels, campaigning strategies must be totally re-thought. On its own, the U.N. process cannot be trusted because much of it is driven by corporate interests.

While the New York march encouraged millions of people, a march is still a march. One possibility is the formation of a huge global network or coalition that would give groups and ordinary citizens the power base needed to begin winning the environmental war.

Right now, people are pretty much powerless when it comes to making the biggest decisions ever concerning their lives.

Most governments in the West no longer have the power to serve the interests of everyday people and protect the environment. Real power is held by corporations espousing neoliberal values and believing that it is okay to continue to use non-renewable, carbon emitting energy.

Many committed environmentalists, such as Janet Redman of the Washington think tank the Institute for Policy Studies, are nervous that corporations have set up new, aggressive groups, such as We Mean Business, to get in on what they see as a likely financial bonanza.

"Climate issues are central to the broad public interest but corporations are specifically set up to maximize profits," she told MintPress News, "so we have a fundamental incongruity here."

If the corporations, governments, and military continue poisoning the environment, there is little chance that global warming can be kept within the target of close to two degrees Celsius.

Perhaps a main reason for the failure of environmental groups is because they have fought mainly against the symptoms of climate destruction rather than tackling the core sources. For instance, stopping the Keystone pipeline from Canada to the U.S. is not much more than a symbolic action. If oil companies have their way, the crude will be moved by train -- as it now being done -- or through other pipelines.

A major hurdle to overcome concerns the need to have all countries sign a new climate treaty in Paris in Dec. 2015 that would go into effect in 2020.

Developed countries are contributing to a special fund to help the South meet climate challenges but, in general, they say both north and South should contribute equally.

What's to be done?

Anti-carbon campaigners have a number of things going for them. Many millions of people know that the Earth is in serious trouble. This represents tremendous potential power. They know that if there is the will, much of the non-renewables could replace dirty energy. The community would have full use of the Internet, a powerful campaign-building tool.

While it will be a huge task, people in different countries must form some sort of power base that can challenge corporate power and also influence the signing of a world climate agreement.

For our part in North America, it's unfortunate that the NGO environmental sector is so seriously split that it can't be called a movement. Dozens of large groups have staff dedicated to fighting climate change, but they do not tend to cooperate among themselves when it comes to campaigning. There is no consensus on what strategies to adopt.

More problematic is the fact that many large green groups take millions of dollars from powerful corporations -- some of the same corporations involved in pumping millions of tonnes of carbon into the atmosphere.

The Big Green groups need to break away from their dependence on corporate money, but even if they don't, the tens-of-thousands of other independent environmental groups need to organize.

However, the peoples' fight for the future of the planet should not be left to environmental groups. In North America and around the world, tens-of-thousands of progressive networks and organizations should be involved -- everything from aboriginal groups, to unions, to arts organizations.

If a broad movement can be established, it could consider pouring massive resources into three areas:

• First, the movement could put on pressure to speed up the use of renewable energy. A united campaign would be able to identify key areas in the world where extra pressure would lead to rapid adoption of more wind, solar, and thermal energy. Aspects of Germany's world leading program could be introduced elsewhere.

• A large, coordinated movement would have the power to develop strategies to challenge the disastrous practices of energy companies. Organizers could learn from the successes of past struggles, such as the campaign for civil liberties in the U.S., or the efforts to end the Vietnam War. Perhaps a massive campaign employing many different tactics could be carried out against one corporation that would be identified as "The World's Most Irresponsible Carbon Emitter."

• Finally, an international movement could come up with a model for a climate agreement that it would promote as a North-South compromise before the UNESCO Dec. 2015 meetings. A consensus on the make-up of a fair deal should be developed before next year's summit so there can be no chance of failure.

It seems safe to say that if the unconnected environmental community continues on its ineffective way, and millions of concerned citizens continue to sit on the sidelines, we may not get the real action needed.

If a new, citizens-led movement can be established, it could help the world avoid further increases in the deaths of millions of people in underdeveloped countries, more huge destructive storms all over the world, and the extinction of thousands of species.