"The fact that you are allowed to stay alive already shows the country's inclusiveness." -- Zhang Xiaoming, the head of China's Liaison Office in Hong Kong, to local legislators 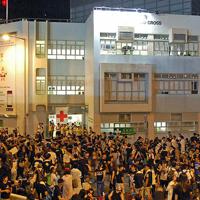 How violently China responds to Hong Kong's pro-democracy protests will not only determine the fate of millions there; it will also have a major impact in Metro Vancouver and Canada.

Despite the massive trade Canada does with China, extensive travel between the two countries and the friendliness of federal, provincial and municipal governments towards China, it remains run by a repressive, military, allegedly "communist" dictatorship.

A Chinese crackdown in the former British colony would have serious political and economic consequences in British Columbia, as the province hopes to sell liquefied natural gas and increase exports of other natural resources to the Asian giant.

There are over 300,000 Canadian citizens living in Hong Kong, and those with relatives and friends there are concerned about their safety.

Rightly so, given Zhang Xiaoming's brutal response to local lawmakers after they asked if Beijing would allow a democrat to run for the position of Hong Kong Chief Executive, the region's highest office.

"No" was the answer. Choose from Beijing's approved candidates only, or else.

It could mark the end of a "one country, two systems" approach that has allowed limited democracy and freedom in Hong Kong while it remains part of China.

But despite the rising tensions, Prime Minister Stephen Harper has yet to say anything about Hong Kong, while B.C. Premier Christy Clark merely mouths vague hopes that violence will be avoided.

If actions speak louder than words, Harper's upcoming visit to Beijing in November for Asia Pacific Economic Cooperation meetings -- after ratifying a controversial trade deal with China -- says it all.

She went on: "The Tories, backed by a naïve Canadian Chamber of Commerce and a handful of big, conflicted business interests, have demonstrated the worst negotiating skills since Neville Chamberlain."

Meanwhile, the only public expression of Canadian government support for democracy is this lonely tweet by Foreign Affairs Minister John Baird: "Aspirations of people of #HongKong are clear. Canada supports continued freedom of speech and prosperity under the rule of law."

The ministry followed up in a statement: "Canada reiterates its support for the implementation of universal suffrage for the election of the Chief Executive in 2017 and all members of the Legislative Council in 2020, in accordance with the basic law and the democratic aspirations of the Hong Kong people."

"It's really positive that the protests have been peaceful and no one's life is in jeopardy. It is, though, a very tense time, I know that," she optimistically said on Oct. 2, while adding that she continues to support "one country, two systems."

Just like the Canadian Chamber of Commerce in Hong Kong, which in June publicly opposed Hong Kong's democracy protests, along with other international business groups.

But former Canadian ambassador to China David Mulroney, appointed by Harper in 2009, says we have an obligation to speak out in support of democracy, and should coordinate with other countries to do so.

"China would like to see a world where we're all tongue tied and afraid of raising these issues," Mulroney said.

The last British governor of the city, Chris Patten, compared the election Beijing wants held, with its own hand-picked candidates as the only choice, to "more or less what happens in Iran."

Mulroney points out that China is very sensitive to criticism, as I personally discovered the hard way.

I received extremely graphic and obscene death threats in 2008 after I wrote a column suggesting a boycott of China, not just the Olympic Games, over its treatment of Tibetan protesters.

The emailed threats included specific information, with the individual saying they had a gun and was inside an office where I worked, and claiming they would also kill my family.

After reporting the threats to Vancouver police after the emailer promised even more violent attacks, two officers arrived at my home within an hour.

Police soon found that the emails came from inside China, and said the Chinese government does not cooperate with foreign internet investigations. Case closed.

Fortunately, no further threats were received, and there was no evidence they came from anyone but a sick individual. But China's unwillingness to investigate shows that trying to silence critics of the regime in foreign countries goes unpunished.

Canada's pathetic response to supporting Hong Kong democracy contrasts with China's ferocious opposition, and encourages using overwhelming force against brave protestors who are simply demanding what we take for granted: a vote.