"Towards thee I roll, thou all-destroying but unconquering whale; to the last I grapple with thee; from hell's heart I stab at thee; for hate's sake I spit my last breath at thee." -- Captain Ahab in Moby-Dick by Herman Melville, 1851 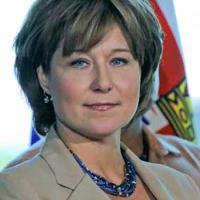 For Premier Christy Clark, the BC Teachers' Federation has become Moby-Dick, the object of hatred to be pursued to the ends of the earth.

Clark has become Captain Ahab, driven mad in her desire to destroy the union version of the white whale.

That became apparent last week when the BC Liberal government announced what is a truly crazy plan -- to pay parents of students $40 a day if the union strike continues into September.

Crazy, because it makes no sense.

Clark's scheme would instantly dispose of the estimated $12 million in daily savings from the strike without putting a penny into improving public education.

What's worse, while the government claimed the money is for "child care" for students under 13 years old, there is no requirement that parents spend it on child care -- nor is there child care available to be had, and certainly not for $40 a day.

The move infuriated the union, which it was highly calculated to do.

BCTF president Jim Iker dismissed the government move as "a blatant and divisive attempt to prolong disruption in B.C. schools."

It shows the premier's unhealthy obsession with harpooning teachers instead of solving the serious underfunding problems in our schools.

In this whale tale, there is no BC Liberal Starbuck -- Captain Ahab's first mate who cautioned against chasing Moby-Dick.

If there was, perhaps Clark would realize the folly of her mission.

Remove the union from the equation, and consider whether the government would compensate oil companies if First Nations took legal action that delayed pipeline construction or drilling plans. Not a chance.

Would Clark pay $12 million a day to patients to receive treatment in the United States if B.C. doctors legally withdrew their services in a fee dispute? No way.

The BCTF is taking legal strike action, as is its right, but the BC Liberals are giving away allocated education dollars.

The reason this borders on insane is because the B.C. government is appealing a B.C. Supreme Court decision that ruled it must restore class size and composition limits negotiated by the union.

If the government loses again, it will be forced to spend hundreds of millions of dollars on more teachers and resources in our schools.

Where will it get that money if all strike savings are spent? You guessed it -- from taxpayers.

If the teachers are on picket lines for two weeks in September, forcing the government to raise wages and benefits more than it wants, the strike savings money that could have paid for it will have already disappeared.

Captain Ahab asked a passing ship as he began his demented pursuit: "Hast thou seen the white whale?"

Yes, indeed we have -- and a battle with it will not end well.

The solution is obvious: negotiate a fair agreement with teachers this month and put the dispute behind you.

But so long as Christy Clark channels Captain Ahab, this ill-fated voyage continues.