The broad outline of Ginger Goodwin's story is well known to many of The Tyee's readers. Albert "Ginger" Goodwin was active in the coal mining unions of Glace Bay, Nova Scotia and Vancouver Island. Blacklisted from the Island mines after the strike of 1912-14, Goodwin went to Trail to organize smelter workers at Cominco into Mine-Mill. When conscripted for military service in World War I, he took to the bush on Vancouver Island, where on July 27, 1918, he was shot and killed by a special constable in the rugged terrain near Cumberland, B.C. 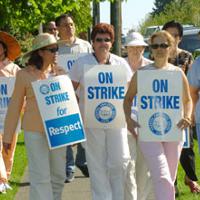 Goodwin's death sparked a one-day general strike in Vancouver and has been a rallying point ever since. He remains controversial: in 1996, the NDP government named a section of highway on Vancouver Island "Ginger Goodwin Way," and in 2001 the new Liberal government quickly tore the signs down. He is commemorated annually at the Miners' Memorial Day ceremonies at the Cumberland cemetery, and people still argue over his death and legend.

Despite the continuing interest in his life and death, Goodwin is often misrepresented. What is too often left out of the commemorations and tributes by those who want to invoke his name or claim they follow in his footsteps is Goodwin's radical politics. I suspect there are people out there who would burn their Ginger Goodwin T-shirts if they understood what Goodwin stood for and I suspect Goodwin might be tempted to tear that shirt off some who wear it. Yet it was his politics that defined Goodwin and it is his politics that can teach us useful lessons now.

No one celebrates Bengough

By way of comparison, we can consider one of Goodwin's contemporaries, Percy Bengough. He was born three years earlier than Goodwin and immigrated to B.C. in 1905. Unlike Goodwin, there is a lot of material on Bengough and his career: fonds at the national archives, press coverage, over 200 photographs. And it was a lengthy career: he joined the machinists union in Vancouver, served as the secretary of the Vancouver Trades and Labour Council for 20 years, and headed the Canadian Trades and Labour Congress for 11 years, finally retiring in 1954.

Yet few people know anything about Percy Bengough. There's a good reason for that. Unlike Ginger Goodwin, there is nothing to be learned from studying Bengough's life. Nothing, that is, for activists who want to participate in and build a democratic, militant movement. Bengough was a careerist who accomplished nothing of note during his career. He became prominent in 1919, when he fought the One Big Union and helped split the Vancouver Trades and Labour Council, going on to head the conservative faction and helping workers lose the labour temple on Dunsmuir Street.

In the 1930s until his retirement, Bengough fought the left in the labour movement as an active Cold Warrior who enjoyed hanging with his golfing buddy, William Lyon Mackenzie King. Biographies of Bengough note his ascension to the highest offices of the labour movement, but do not suggest he ever organized a single worker or led a single strike. His most memorable quote may be from 1950, when he announced that "we are fighting Stalin's Russian Soviet dictatorship in South Korea. We must fight its willing dupes right here at home and most particularly it is our job to expose them and destroy their influence inside our own trade unions."

We might compare that with some of Goodwin's political writing:

"...we know that all this misery is the outcome of someone's carelessness, and that someone is the capitalists, those who own the machinery of production... This class of parasites have been living on the blood of the working class, they are responsible for the conditions existing at the present time... In order to throw this system over we have got to organize as a class and fight them as class against class... and our weapons are education, organization and agitation... and the principles of Socialism, for it is necessary that you know when to strike and how to strike, and if we have not these weapons when the time comes, we shall not be able to predict the outcome of the fight... we have the power and the lever to overthrow the existing society."

The historical lesson of Goodwin is that every innovation, every new tactic, every new organizing drive, every effort to end racism and sexism in Canadian labour history was led not by the Percy Bengoughs but by the radicals of the Knights of Labor, the Industrial Workers of the World, the Socialist Party of Canada, the One Big Union, the Communist Party, the public sector workers who won the right to unionize and strike.

The advocates of go-slowism, pragmatism, bread and butter unionism, did not build the labour movement: they capitalized, and I use the word carefully, they capitalized on the initiatives and gains of the radicals who dared to go where the conservatives refused to go. Percy Bengough was one of them, and it is proper that we give him little historical attention, because he has nothing to teach us. Samuel Johnson wrote that patriotism is the last refuge of a scoundrel, but I would like to suggest that pragmatism is the first refuge of a scoundrel.

We all understand the need for compromise; Goodwin fought for better conditions and wages as well as the commonwealth of toil. But unlike Bengough, Goodwin's radical, socialist understanding was a constant brake on that slippery slope of compromise that leads to opportunism. And unlike Bengough, Goodwin belonged to a movement that was quick to remind him when that brake needed to be applied.

The lack of a radical critique is a problem for labour and the left. Goodwin knew his Marx, and he knew that fighting for "fairness" and "respect" was a mistake. First, he understood that if you start by asking for fairness and respect, by the time you negotiate and bargain and cooperate and compromise, you will end up settling for something less than fairness and respect. Second, if you call for fairness and respect, you open a debate over what those words mean. That is a debate workers are likely to lose, because they do not control the media where the debate will take place; they will be drowned out as the bosses define the terms.

After all, as Marx observed, it was just as "fair" for capitalists to try to lengthen the working day as it was for workers to try to shorten it. "Between equal rights," Marx pointed out, "force decides," and so the work day is determined not by appeals to fairness and respect but through struggle. Goodwin understood that, and he understood that one of the weapons in that struggle was radical thought.

Ironically, the BC Liberal government took Goodwin's politics more seriously than some of his supporters; they tore down the signs proclaiming Ginger Goodwin Way because they understood that Goodwin and the memory of his radical politics are a threat to them.

As Goodwin put it, "the masters can howl: we do not hide our intentions, for we are what they have made us -- the dispossessed class that is out to overthrow them."