[Editor's note: This article first appeared on The Sightline Institute's blog and is republished here with permission.]

This excellent Vancouver Sun story put a much needed spotlight on the Golden Ears Bridge -- where traffic is running so far behind projections that TransLink now forecasts that the agency will lose between $35 and $45 million per year on the bridge, for at least the next several years. 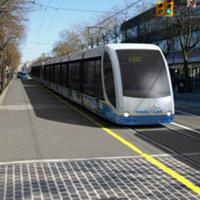 Why Is TransLink's Price for Light Rail Triple What Other Cities Pay?

But the story is really just the tip of the iceberg in a much larger story about Greater Vancouver's transportation finance woes. Not only are bridge toll revenues falling behind projections, but gas tax revenues are too. Take a look at the black line in the chart below, representing the one-year average gasoline sales volumes in Metro Vancouver.

Since entire tanker-loads of motor fuel are now taxed all at once, there are wild month-to-month swings in gasoline volumes. For a while, this created huge uncertainty about fuel sales trends; nobody knew whether fuel sales were soaring, sinking or roughly flat.

But over a few years, it became clear that gasoline sales had started to decline. And that realization apparently sent shockwaves through TransLink's entire budget. In the agency's 2012 budget forecast, TransLink was forecasting substantial growth in annual fuel tax revenue through 2021.

But their 2013 plan recognized that gas taxes were at best flatlining -- a realization that forced the agency to strip more than half a billion dollars from their budget through 2021.

And the forecasts are getting progressively worse: the 2013 forecast was bad enough, but the 2013 draft forecast, recently released for public comment this morning, trims even more money from TransLink's long-term budget. 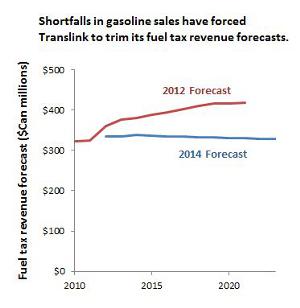 But to transportation planners who had been counting on the revenues represented by the red line, the lower revenue forecasts in the blue line must have come as quite a shock.

Several different forces are contributing to falling gas consumption in the lower mainland. Declining driving per capita certainly plays a role. Gains in fuel efficiency probably do as well. But there's also evidence that a strong Canadian dollar is encouraging some drivers to cross over into Washington to buy gas.

The U.S. Bureau of Transportation Statistics has reported elevated border crossings between Washington and Canada since Canada's dollar started to strengthen.

At the same time, Washington has seen steep increases in revenue from the state's little-known "Border Area Motor Vehicle Fuel and Special Fuel Tax," which puts a one cent per gallon surcharge on motor fuel bought within 10 miles of a border crossing. The increase has been particularly high in Point Roberts, which isn't even contiguous with the U.S. mainland.

Regardless of the reasons for the decline in Greater Vancouver's gasoline sales, there's no question about the fiscal impacts: TransLink just isn't getting as much gasoline tax revenue as it thought it would a few years back. Meanwhile, toll revenue from the Golden Ears Bridge is falling badly behind forecasts.

But the agency's mega-project debt isn't going away. And when gasoline and toll revenues don't show up, but debt service obligations keep coming, everything else gets squeezed. Transit in particular has been on the chopping block over the last two years. So far the agency has managed to avoid major service cuts, in part by tapping into its reserve funds.

Still, TransLink has had to postpone transit service expansions and cancel some discount transit pass programs -- a sign that the agency is hunkering down, even as driving is flatlining and demand for transit is rising. In fact, TransLink now predicts that its budget woes will make it impossible for transit service to keep pace with population growth -- leading to declines in per capita transit service.

The irony is palpable. Much of the agency's budget problem stems from its relationship with cars. The Lower Mainland has built new, expensive facilities to move vehicles, but the drivers (and the revenue they generate) haven't shown up. Yet the budget squeeze falls particularly hard on transit riders -- people who aren't using cars at all!

If I were conspiracy-minded, I'd say that TransLink's shrinking transit ambitions are part of a plot to keep people in private vehicles -- where they'll pay more tolls and gas tax.

But since I'm not conspiracy-minded, I'll say it looks like just another in a long and depressing series of examples of how bad traffic forecasts can lead transportation spending astray.