What do the demonstrations at Gezi Park in Turkey, the mass protests in Natal, Brazil, and the uproar over recent rezoning in Vancouver's Grandview-Woodlands neighbourhood have in common? 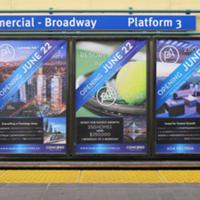 Throughout the world we are observing what happens when you suppress a debate about who the city is for, and how it should be built.

At Gezi Park in Istanbul, Turkey, middle-class citizens reacted angrily to a proposal to add a shopping mall to not just one public space in the city, but to many.

Their rage was not provoked by the loss of a few trees, but rather by the loss of the sense that the city had any other function than being a receptacle for capital; beholden to nothing other than the formulas used to calculate financial returns on those investments.

In Natal, Brazil, their rage was not just about the precipitating cause -- a bus fare increase -- but about a concept of the city which justified grandiose billion dollar sports stadiums on economic development grounds while the urban infrastructure they depended on to get to work got nothing. Working families, who could never afford to see events at the new stadium, felt so shamed and insulted by this hubris they nearly brought down a government.

And finally, closer to home and with none of the street demonstrations but with much of the same sense of profound shame, anger, and disappointment -- we have the example of the Grandview-Woodlands area plan.

After months of collaborative engagement between stakeholders and planning staff, the city tabled a design centered around a number of tall glass towers; towers much higher than any building nearby and much higher than anything previously discussed.

Area stakeholders who had participated in good faith, who were assured again and again that in Vancouver planning was collaborative and democratic; were surprised, then ashamed of their gullibility, then outraged at the betrayal.

One expects this turn of events to have long lasting significance, and the signs are not good.

Already voices are raised, including the mayor's, equating resistance to the plan with resistance to affordable housing and sustainable transport. Opponents are thus tarred with the NIMBY brush, even though these same citizens had previously agreed to substantial increases in the population of their neighbourhood.

Their only condition? That the grain of that change has something to do with the qualities of the community that mean so much to them. A human scale, a habitable street, neighbourhood shops, community jobs close to homes, housing that they could imagine their kids living in.

But City Hall had a different idea. I understand that a plan keeping more with the physical context, scale and prevailing urban pattern of the Grandview-Woodlands area had been prepared for public review -- a plan that while at least doubling area density, attempted to respond to ideas and concerns raised over many months by community stakeholders.

But this plan was never tabled. Instead, a plan revolving around towers was the one we all saw. It's speculation on my part, but word on the street is that there may have been a feeling in City Hall that the more modest plan without towers did not demonstrate the city's commitment to density around proposed Skytrain station areas, density necessary to gain Victoria's support for the three billion dollar Broadway subway plan.

If this is true it begs the question: If the city seems willing to deform any local process to support the ambition of the subway, why is that subway so important?

My conversations with many supporters of the subway become most coherent when importance is placed against the background of what a city needs to do in order to stay in the top tier of cities globally.

Those who are most enthusiastic will explain that the City of Vancouver has blocked assets -- for example, capacities and infrastructure that could catalyze substantial high grade growth (in globally significant high growth areas, such as bio-medical industry).

Proponents are able to argue this case with some urgency, arguing as I and others have in the past that Vancouver is in danger of losing its primacy in the region to more dynamic cities to the east, in time being resigned to a role of retirement community and tourist destination. A pretty place with no real industry -- a sort of Canadian version of Venice.

Viewed from this perspective, their urgency, their obvious love for the city and the strength of their commitment to it is more than understandable -- it's laudable.

But this brings us back again to the parallels between the Turkish revolt over Gezi Park and the Brazilian "Bus Revolt" actions.

While the case is very strong for increasing Vancouver's economic magnetism -- for Vancouver to be one of the world's "winners" over the course of the next few decades -- the weakness of this vision is the view of what makes cities thrive. It assumes that the fickle goddess of global investment must be persuaded to direct her gaze our way for us to flourish.

But not everyone agrees. The protests in Brazil and Turkey are all in opposition to this view. The critique is that when decision makers focus exclusively (and in most cases undemocratically) on attracting global investment to achieve economic development ends, it undermines the natural rights of citizens.

The rage generated by this feeling of impotence can sometimes seem incoherent, leaderless, unfocused -- but the rage is real and it's powerful enough to threaten established governments.

This rage seems particularly acute when democratic practices have been subverted -- when leaders present a face of community connection and a commitment to consultation on the one hand, but are driven by external motivations which have only a limited connection to immediate local needs and current democratic processes.

In the case of Vancouver, it feels particularly heartbreaking to many.

The despondency, present in many conversations heard across the city, is consequent to a feeling of having lost our way. There is a feeling that the green progressive agenda has been co-opted by the same forces many thought it opposed.

Certainly it can be and has been argued that there is more than one way to measure and arrive at a sustainable city, and to ignore global realities is unwise. But absent of a legitimately democratic conversation about what kind of city best accommodates our lives and the lives of our kids, the frustrations among the electorate will likely remain palpable, and our progress towards our common goal will be halting at best.