A travelling tribute to the men and women who lost their lives in Afghanistan is coming soon to a provincial legislature near you. 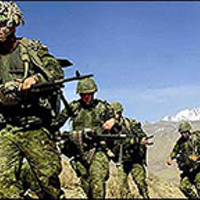 How the West Destroyed Afghanistan

Former defence minister Peter Mackay unveiled the temporary display in Ottawa on July 9. It will be open to the public and remain on Parliament Hill through Remembrance Day, before heading off on a two-year journey across the country to visit provincial legislatures and then on to Washington.

The memorial, featuring plaques of the 161 Canadians killed, will be a welcome gesture, no doubt, for some grieving friends and families.

Others will react much differently. Although the traveling tribute appears to be straightforward, in reality it carries with it a heavy dose of hypocrisy regarding the Conservatives' real objective of the tour and their treatment of military veterans. The main goal of the memorial is not so much to honour those killed but to instill into Canadians the idea that the Tories command a modern-day fighting machine ready to join with others to defend "freedom" wherever necessary.

'It's an insult and a disgrace'

"The faces you see etched here are of those who made the ultimate sacrifice in... creating a more secure environment for Afghans," claimed MacKay at the tribute's launch, propagating the big lie about Canada's effort in Afghanistan.

In truth, the estimated $18.1 billion the Harper government will have spent fighting the Taliban, the 161 deaths, and more than 2,000 Canadian injured did nothing to improve the lives of the Afghan people. The situation in Kandahar province, where Canada did its fighting, is just as bleak as when we arrived.

The fact that MacKay's bureaucracy could not even get the launch of the tribute right is a sign of the government's lack of respect for the families of those killed. The tour wasn't scheduled to leave Ottawa for weeks, but the military bureaucracy, in a rush to make the announcement as soon as possible after Canada Day, failed to adequately notify many of the families so they could attend. Many families missed the event.

"It's very upsetting," Jane Byers, the mother of a private killed by a suicide bomber who was in Edmonton at the time of the launch, told the CBC. "This monument is like a shrine to the families... This last-minute crap is not cutting it. It's an insult and a disgrace."

The majority of the men and women completing training before being shipped off to Afghanistan probably had very few life experiences. However, life on the battlefield has been a living hell. Some stats:

At least 50 members of the forces committed suicide as a result of their terrifying experiences in Afghanistan. (Interestingly, only three of those who killed themselves are honoured as part of the memorial. Several families criticize the government for moving so slowly to complete the formal death investigations.)

Almost 14 per cent of those who served were diagnosed with a mental health disorder, but some say this doesn't reflect the larger extent of the problem.

A total of 5.5 per cent developed other depressive disorders.

A 2011 military study estimated that eight per cent of personnel deployed to Afghanistan were diagnosed with Post-Traumatic Stress Disorder (PTSD) within five years of returning home.

Cutbacks leave vets in the lurch

A straight-faced MacKay told those present in Ottawa that the memorial was "to honour the bravery, the dedication, the valour and professionalism of the civilian and military personnel who have fallen in Afghanistan."

This is hypocritical at best. MacKay has been up to his neck in establishing new, unnecessary austerity measures that are making life miserable for many of the veterans who survived Afghanistan and other warzones.

Until two years ago, the Harper government was fighting a ruthless legal battle to deny 4,500 disabled veterans of much-needed pension money. The disabled veterans had to file a class-action lawsuit against Ottawa to stop it from clawing back a portion of their monthly Veterans Affairs disability pension. Finally, the court sided with the pensioners, and the government has had to replace the funds.

Families of a number of mostly infirm veterans at a 500-bed veterans' centre in Toronto have complained that austerity-driven staff cutbacks have led to patient neglect and abuse, such as head injuries, severe bed sores, and patients being left in their own excrement.

In addition, many poor veterans are denied the money required to pay for their burial. Between 2006 and 2011, the Last Post Fund, which had adopted more stringent eligibility requirements as a result of Harper's very selective austerity program, was turning down 67 per cent of the applications for support.

Meanwhile, the Conservatives are closing nine Veterans Affairs Canada district offices across the country. This leaves veterans and their families without access to in-person services in many communities, including vitally needed counselling. Veterans have to rely on phone or online assistance. By 2015, Veterans Affairs will have cut 800 jobs and there are plans to shut more district offices.

The Department of Defence has been chopping away chunks of expenses for months, claiming that severe austerity measures were necessary to meet its budget objectives. Records show that the department has a whopping $2.4 billion it has not spent for the budget year ending March 31, 2013. The department says that when all the bills are paid and adjustments are made, the surplus will not be so large. What will be the extra amount then? Perhaps $1.5-billion?

So why have the veteran with pensions been so badly nickel-and-dimed?

At first I thought the problem was government incompetence. But I don't think so. This devious Conservative game of budget manipulation, intended to downsize and destroy government as we have known it over a number of years, is mean-spirited and heartless.

This time they are fighting their battle on the backs of poor and injured veterans -- the parents and grandparents of those new recruits that the Conservatives so gladly shipped off to the desert lands of Afghanistan.