After 20 years of the World Wide Web, we who use it remain largely parochial in our interests. Unless we're looking for a cheap resort in the Caribbean or the lowest airfare to Bangkok, we don't seem interested in exploring the rest of the world. 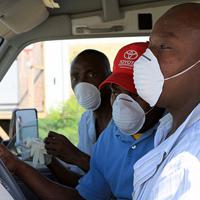 That same ease of travel, however, has brought other countries' illnesses right to our doorsteps. As I've seen on my blog H5N1, much of the world is fighting diseases that we've rarely heard of -- and that we don't want to think about.

But we should be aware of them. Some could well turn up in Canada the way SARS did in 2003. Others pose serious social and political problems in their host countries that we may have to deal with through foreign aid or even military involvement.

So here is a list of diseases that the rest of the world knows all too well, from the very common to one that doesn't even have a name yet.

1. Polio. If you were born after about 1955, you have no idea what dread it once caused across North America. I'm a polio survivor (class of 1948), and lucky not have developed post-polio syndrome.

Polio has been stamped out in most of the world, but in three countries it stubbornly persists: Nigeria, Afghanistan and Pakistan. Political unrest has made it hard to finish off, especially in Pakistan. That's because the CIA ran a phony polio-vaccination campaign in Abbottabad in hopes of confirming that Osama bin Laden was hiding there. It didn't work, and local suspicion will make it almost impossible to finish off polio there.

Maybe that's why the World Health Organization is appealing for $1 billion to vaccinate enough children in countries bordering the hot-spot nations, to keep polio from spreading.

2. Cholera. You heard about the cholera outbreak in Haiti in October 2010, but probably not lately. That outbreak continues, and by early June 2012 it had infected about 553,000 Haitians (over five per cent of the population), hospitalized 336,000 and killed over 7,200.

Haiti's government spends $40 per person on health care (we spend $4,519), so cholera -- imported by the UN's Nepali peacekeepers -- is now endemic in a country that had never seen it before.

3. Dengue. Also known as breakbone fever, this painful viral disease is carried by mosquitos. According to WHO, about 2.5 billion around the world are at risk of infection. The Americas alone had 1.6 million dengue cases in 2010, and 49,000 were severe or hemorrhagic dengue.

Dengue has four types. Infection with one type confers immunity to that type, but if you're infected with another you risk the hemorrhagic form of the disease, which can be fatal. The Brazilian state of Rio de Janeiro has seen 112,000 suspected dengue cases this year, with 22 deaths -- a big improvement over 2011, when 119 had died of it by the end of May.

4. Chagas disease. Named for the Brazilian doctor who identified its cause a century ago, this parasitic disease is carried by a "kissing bug" widespread in Latin America and now established in North America, Europe and the western Pacific. WHO estimates 10 million people are infected worldwide, and over 10,000 died of it in 2008.

A New York Times report recently called Chagas "the new AIDS of the Americas," pointing out that 300,000 U.S. residents now have it.

Recent speculation suggests that Charles Darwin acquired Chagas during the South American travels that inspired his theory of evolution, and it was the cause of the heart disease that killed him.

5. Nodding disease. It's relatively new and has no clear cause. It's been spreading through Central East Africa, from Sudan to Tanzania, since the 1960s.

At the moment, it's causing serious alarm and political conflict in Uganda, where the government seems unable to deal with it.

No one else can either. One recent study suggests it's a form of epilepsy, since eating seems to trigger severe seizures. The study also notes that the vast majority of victims are also infected with a parasite associated with river blindness. While most victims have been children who suffer mental and physical stunting, nodding disease is now reported to be affecting adults as well.

We won't likely be affected directly by this disease, but it poses yet another medical and political problem for African countries struggling to achieve some kind of stability.

6. IPHS. Vietnam is dealing with a strange disease affecting the H're ethnic minority in Quang Ngai province. A news report in Saigon Giai Phong called it "inflammatory palhoplantar hyperkeratosis syndrome," which is a description but not a diagnosis: victims have thickened skin on their palms and soles, with ulcers that look like burns. Liver problems follow, and so far 23 persons have died of it out of at least 214 affected.

The illness doesn't seem to be carried by a bacteria or virus, and doctors suspect IPHS is a result of malnourished people eating mouldy rice. It may be the result of arsenic poisoning. But its true cause remains uncertain.

What little attention these diseases get is due in part to their rarity and deadliness. H5N1 bird flu has infected just 604 humans out of 7 billion, but it's killed 357 of them. You're more likely to win the lottery than to catch H5N1; in either case you'll get media attention because you're unusual.

These are not just the burdens of other countries; they're our burdens as well. In a globalized world, we need to think in terms of global health. By weakening the economies of countries like Haiti and Vietnam, Pakistan and Brazil, diseases generate political stress that we and our allies have to deal with. And we may well have to deal with some of these diseases, right here.

Politics, said Rudolf Virchow, is medicine practiced on a large scale. We could soon be practicing medicine on a larger scale than we ever imagined.