There are 600,000 British Columbians with mental health issues. I am one of them. 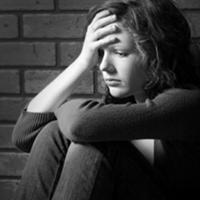 Teen Screen: Should We Be Testing for Mental Illness?

If the physically ill in our province were dealt with as mentally ill people are, the legislature and its lawn would be crammed with irate people and there would be violence. I mean that.

I was diagnosed 25 years ago with depression manifesting itself as an anxiety syndrome. I was lucky as hell that when I crashed my doctor's office demanding immediate treatment for the liver cancer I had (I diagnosed it in the Columbia Medical Encyclopaedia), that he saw me and, after some ultrasound tests, vainly tried to convince me I had gallstones. He then asked me when it was my daughter had been killed.

My answer was, "What the hell does that have to do with liver cancer?"

He then asked me some more questions and after two or three more, I broke out in floods of tears.

I said I was lucky -- Mel Bruchet was one of very few physicians who had taken courses on mental illness and thus knew the signs. I literally owe him my life.

Stigma in the shadows

There are two issues here.

First, how do you get mentally ill people to overlook the stigma society imposes on them and, second, how do we get the government's attention?

The first question is of huge importance and the answer is the same answer as for the second -- governments have to acknowledge that the mentally ill are real, decent people who badly need health care -- then make that care available.

To this day, doctors are not properly recompensed for services to the mentally ill. And far too many don't understand mental illness, being hopelessly under-taught on the subject in medical school.

Because treating the mentally ill takes time, much more time than physical illness, doctors lose money when they get involved.

The blame for this shocking situation can and should be shared by the medical profession, the government, and the government client, The Canadian Mental Health Association, B.C. Branch.

The NDP were on track when they created the Mental Health Advocate, whose job was to bridge the gap between the frightened victims and help for them. The Advocate was appointed after an all-party committee came up with a unanimous choice, which then required a two-thirds majority in the House.

The first and last Advocate, sadly no longer with us, was Nancy Hall. Her term expired shortly after the Liberals took office and she was not replaced.

She was finding sick people, which would cost the government more money. Thus the mentally ill subsidize the physically ill in this province.

I'm going to relate a story which tells you how much the medical profession, the Liberal government and the B.C. branch of the Canadian Mental Health Association care about the mentally ill.

A couple of years ago -- after unsuccessfully lobbying the government to bring back the Mental Health Advocate -- I got the idea of doing it in the private sector, and that I was the right person to do that.

I wrote a lengthy submission for the College of Physicians and Surgeons, the BC Medical Association, and the B.C. Branch of the Canadian Mental Health Association. I will be very pleased to make that submission available -- just let me know here.

What I planned to do was hold meetings and give speeches around the province to try to get the ill to overcome the stigma and seek help. Because of political and environmental campaigns, I'm well known in most parts of the province and I knew how to get media attention. I was hardly looking for long-term employment -- in fact I made it clear that, because of my age, one of my first jobs would be to find a replacement.

I first gave my presentation to the Registrar of the College of Physicians and wasn't even extended an invitation to make my pitch to the board members.

Next, I made a presentation to the BC Medical Association and was rebuffed without a hearing.

In neither case was I asking for money -- only their help and approval.

At this time I was a patron of the B.C. Branch of the Canadian Branch of the BC Mental Health Association and had been honoured by them on several occasions. I founded the annual Bottom Line Conference which brings business, labour, politicians and mental health providers together every year to deal with mental illness in the work place.

I originally made my pitch and did ask for financial help. Soon I found out that there would be no money, which I could understand.

I had one request. Would they, through their branch offices, give me contacts I could use to make speeches and deal with the local media?

Six weeks elapsed before the word came back. No help of any kind.

Bring back the Advocate

I resigned as patron and I was airbrushed out of their history. Not only was I not asked to give opening remarks at the Bottom Line Conference as usual, I wasn't even invited!

Gone were the speeches I gave for them. Gone were the videos I helped make, gone was my help and support over the years. I was a non-person because I was "too political."

My usefulness to the mainstream mental health industry had ended.

Things will proceed as always. The medical profession for their own reasons won't change, the gutless BC Branch of the CMHA will go on making motherhood videos and other such mindless activities, as they suck up to the BC Liberal government.

Last week Premier Clark announced plans to replace the deteriorating, 70-year-old mental health facility at Vancouver General Hospital with a new building. She presented that as a signal her government is dedicated to improving the welfare of B.C.'s mentally ill. In her press conference she failed to mention that B.C. still lacks the Mental Health Advocate her party killed upon gaining power. Which means that for the BC Liberal government, it's business as usual. Let the mentally ill suffer.