Saturday night the Newt won big in South Carolina, and the old white sheets folded in the back of the closet all fluttered magically with a reborn ancient wind. 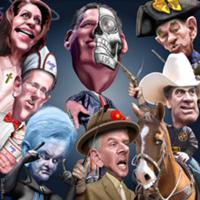 Exit polls asking rational questions missed the basic reason for this rather stunning victory, because most whites voted from their guts and not their heads. They knew better than to tell pollsters why they voted as they did, because they were not eager to declare themselves bigots. But make no mistake, it is all about race.

Newt Gingrich is the southern white demagogue in the campaign, with a pitch perfect attunement to the prejudices of what used to be called the Plain Folks (read Rednecks), Southern "conservative" whites. One of them for the purposes of running for president, if not in truth, the Newt is a nasty old pol who plays the race card with full-throated, venomous joy. They hear him loud and clear.

Mitt Romney, by contrast, is a mild and non-racist Yankee, another member of that northern elite to whom Barack Obama also belongs. He is a real outsider-Mormon, a finance capitalist, clearly capable of using government to help ordinary people, which in the minds of the white majority of the Gamecock State, means supporting lazy blacks at the expense of self-sufficient white folks like themselves.

Rick Santorum, with his passionate pro-life and anti-gay message, is also dear to their born again souls, but he is northern, half Italian, and not one of their Deep South flesh and spirit.

Ron Paul is also a southern white, but his libertarianism is just too strange for most of them to comprehend. He is also 76. In South Carolina, his biggest vote was among young white men who want their dope legalized -- a rather narrow band of support. Paul is an extreme government hater, as well as one who claims not to be a racist but somehow allowed reams of racist opinions to be published under his name. Paul seems also to be attractive to neo-Nazis, whose support he has not dissuaded. I am sure they will make the switch to Newt in the end. Soon it will be Mitt vs. The Newt.

Clearly, such attacks are barely encoded racism of a traditional variety. Newt cannot say n***er, and his supporters know that, but he tells it like it is within their worldview, really socking it to those Yankee journalists and those lazy-black-folks-on-welfare-who-won't-work. As for the abominable black in the White House, Newt will tear him apart in debates, he promises them, and the louder he shouted this hatred the more his support grew.

In South Carolina anyway. For this primary, which he absolutely had to win to prevent an easy Romney march to the nomination, The Newt pulled out all the stops and let it rip.

What about Florida, with lots of Yankees and considerable wealth and Latinos, a much more complex state than redneck South Carolina? What about the north and the west? Will Newt's momentum continue or will he crash once more?  Another way of asking that question is to try to parse the breadth of the power of the Tea Party, the evangelicals, and other reactionary forces at the base of the Republican Party, the coalition that swept Congress in 2010. The Newt lights many of them up across the nation like no other candidate.

But the Republican Party still contains others who find this revolt of the rednecks to be appalling -- and they support Romney. They have played the Tea Party, but this may be their turn to be played, as it was Obama's two years ago. We will find out if the dirty tail will wag their country club dog too.

In their strategic thirst to destroy Obama and regain power, more traditional Republicans have fully embraced the anti-government fury of the unwashed until this election campaign season, but these southern white racists are hardly their own flesh and marrow. The highly elitist core of the national Republican Party is far better educated and wealthier than the rubes to whom they pander. When election time comes, it is they who are supposed to return their party to power, and after all they intend not to just win the next election but to govern in Washington. Hence Romney and his ilk, not Newt and his.

Of course, The Newt is really another Washington insider, tarred with ethical deviance, exposed as an influence peddler to the financial sector. And he is a pseudo-intellectual, quite far from his deer-skinning, coon-hunting base. His demagoguery is hardly sincere. But he is telling the white racists what they want to hear. Baloney on white bread with mayo, hold the mustard.

So they will overlook that he is a Roman Catholic convert, a serial adulterer, and an endlessly shady dealer. Those are the very things that make liberals evil. But if it is one of their own, as in this mythic construction of The Newt, they will forgive all moral and ethical collapses and accept the plea for Christian redemption. Even the most rigid of evangelicalism has enough flexibility to excuse one's own while condemning the very same qualities in one's enemy. In the past, while he preached moral righteousness and abstention to little white school children, The Newt practiced tomcatting with a mistress, all the while condemning Bill Clinton's indiscretions with Monica Lewinsky. But that was then. Time has somehow disappeared such stains of gross hypocrisy for the Newtties.

Let me repeat the question I raised earlier: will this electoral scenario continue or will it short-circuit on the way to the nomination?

Later in the primary cycle, I will address the next logical question. If nominated from the Republican base thus defined, could The Newt possibly swing far enough to the centre to win the general election against Obama? Evidently his voters think so, but what about everyone else?

The whole Romney campaign is predicated on going far enough to the right to win the nomination, while leaving open a return path towards the centre where moderate voters will decide the election in November. Romney electrifies no one with his promise of better government management coupled to a cold fish personality and enormous wealth. He wouldn't know how to demagogue the race issue, or play any sort of populist if he tried.

On the other hand, in his desperation in South Carolina, the Newt went so far rightwards that he has to ride what he hopes will be a huge and sustained wave of the sort he is riding now, that he prays is building. There is no way back to the centre for him.

The American racial divide had long been deep, and with The Newt we hear echoes from the bottom of this putrid barrel. We will see if this recrudescence of this old divisiveness has national legs, or whether the majority of Americans reject it. White Newt vs. Black Barack would be the big test of the state of American racism in our days..

As between The Newt and The Mitt, at the present time I make no predictions.