The other day I decided to visit the site of Occupy Vancouver. What I found was a network of service tents scattered among open spaces, filled with people engaging in what seemed like unending conversations about politics, democracy, and the future. An ethos of sharing and collaborating pervaded the space, and people seemed to revel in each other's company. 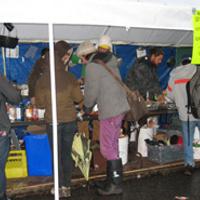 Like an estimated 1,500 other cities around the world, Vancouver residents came together on Oct. 15 to express their frustration over the greed and corruption of the one per cent wealthiest people and the institutions that act in their interest. As the Occupy Vancouver website puts it: "We come together with our diverse experiences to transform the unequal, unfair, and growing disparity in the distribution of power and wealth in our city and around the globe."

In Vancouver, roughly 3,000 came together at the Vancouver Art Gallery on Oct. 15, with many people camping over night or making daily visits. The events were inspired by the Sept. 17 occupation of Wall Street, itself inspired by the Arab Spring.

I've only visited Occupy Vancouver three times, and it has definitely changed and evolved each time. I've noticed what seems like a community that operates based on co-management, collaboration, sharing, trust, reciprocity and overall goodwill. There's a fair bit of complexity as well; a network of 22 committees leads the work in key areas, with major decisions being made in their General Assembly. The committees are open to anyone who shows up. In short, the space seems to function based on a gift economy, where people contribute based on their abilities, desires, and needs.

This may sound like an unsustainable model of organization, but it's actually pretty impressive how well it seems to function. Occupy Vancouver has a medical tent "staffed" by volunteers; there's a nice library with a wide collection of books; a "tea room" that will function as a space for workshops; a kitchen that I was told serves up to 1,800 meals a day, and much more that I didn't get a chance to check out.

The whole space feels dynamic and intuitive. At first I couldn't put my finger on it, but I soon realized that Occupy Vancouver reminds me of "unconferences" I've attended. Unconferences are a kind of event that are common in the software industry. At unconferences, a topic is agreed upon in advance and participants organize themselves into sessions on the day of the event. Unconferences were inspired by the non-hierarchical, collaborative nature of open-source software development and the web in general. In essence, they are the values and practices you find on the web enacted in the offline world.

In a similar way, Occupy Vancouver feels like an ongoing space infused with web values and practices. Their structure of participation mirrors that of the online encyclopedia Wikipedia, which is 100 per cent produced by volunteers. While Wikipedia entries are open to be edited by any Internet user, most people participate just by viewing and maybe sharing entries; a smaller group of about 90,000 people actively edit pages, and a still smaller group makes the vast majority of edits and upholds the rules. Wikipedia is operated as a non-profit and decisions pertaining to governance are made primarily via consensus.

At Occupy Vancouver, a large group of thousands of people share material online, attend key gatherings, and engage with services. A smaller group attends the General Assembly and helps govern the space, and an even smaller group puts in the daily effort needed to keep the committees and services operating. Both Wikipedia and Occupy Vancouver survive in part because they make participation easy -- they let people engage at the level they're comfortable with and in a manner that is meaningful to them.

In a way this shouldn't be surprising. Occupiers make heavy use of online tools like Facebook, Twitter, and Google maps, to organize, collaborate and to get their message out. Many of those involved grew up with the Internet. To many of the occupiers, the structure of participation at Occupy Vancouver probably feels more normal than what you find in a typical workplace or educational institution.

Part of the frustration that led to the occupations is not just focused on the persistent corruption and widening inequality in our society, it's also frustration with the democratic deficit, the disenfranchisement that comes from dealing with opaque, hierarchical institutions, and the lack of real agency.

Will it last? I have no idea, but I think these social practices are addictive and contagious. Occupying Together could prefigure a new kind of society where people are appreciated for their unique talents and skills, where roles are more flexible and engaging, and where the world as a whole feels more like the web.