"We're not under any illusion here. Your main competition here is the NDP." -- Prime Minister Stephen Harper, speaking in Campbell River, B.C. 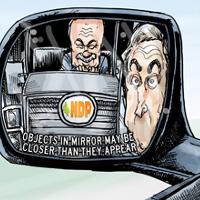 Layton's Surge and the Intentional Citizen

Could 2011 be the defining federal election of the century, with a dramatic political realignment as the New Democrats "orange surge" helps them replace the Liberals as Canada's Official Opposition?

Or will a national collapse under Liberal leader Michael Ignatieff simply lead to a majority Stephen Harper Conservative government?

And could the separatist Bloc Quebecois surprisingly become merely a minor and irrelevant irritant instead of Canada's third largest party?

Several stunning polls last week rocked the political world when they indicated NDP leader Jack Layton is outperforming both the Liberals nationally and the Bloc Quebecois in Quebec.

An Ipsos Reid national poll last week showed the NDP at 24 per cent in second place ahead of the Liberals at 21 per cent, with the ruling Conservatives at 43 per cent -- in majority territory.

An Angus Reid poll had the NDP and Liberals tied for second at 25 per cent each, with the Conservatives at 36 per cent -- likely still to produce a minority government.

But the CROP poll that put the NDP in first place over the Bloc in Quebec is even more shocking -- and could have the biggest impact.

An NDP breakthrough in Quebec could still be minor -- with a handful of seats won and the re-election of deputy leader Thomas Mulcair in Outremont -- or it could be significant, allowing the party to take many more seats from the other three parties.

Layton and Mulcair underlined that possibility with a Montreal rally on the weekend attend by 2,000 supporters -- the biggest turnout in the party's history in Quebec.

For British Columbian voters the national trends mean the importance of their ballot just got huge -- and that the party choices have narrowed to two main contenders -- Conservative or NDP.

A B.C. poll by Angus Reid last week showed the Conservatives at 42 per cent, leading the NDP at 32 per cent, with the Liberals well back at 18 per cent and the Greens at just six per cent, likely ending Elizabeth May's chances of being that party's first elected MP in Saanich and the Islands.

Close seats in BC

Both the Conservatives and Liberals have launched new attack ads aimed solely at the NDP, indicating Layton's rise is no mirage.

What this and the national polls mean on the ground is clear -- the Liberals are going to lose seats in B.C., the NDP is going to gain seats and so may the Conservatives. That could spell the difference between a Tory minority or majority government.

The NDP are likely to take Surrey North from the Tories, where hapless MP Dona Cadman faced this headline in the local Surrey Now newspaper -- "Desperately Seeking Dona" -- detailing her ducking debates as she "remains invisible" in the riding.

NDP candidate Jasbir Sandhu hopes to regain the riding once held by the NDP's Penny Priddy and before that by the late Chuck Cadman, Dona's husband, who was elected as an independent after losing his Conservative nomination in 2004 despite serving seven years as an MP.

The Conservatives expect to win Vancouver South after narrowly missing knocking off Liberal Ujjal Dosanjh by 20 votes in 2008, with candidate Wai Young returning for a rematch.

The NDP also are putting major efforts into electing former B.C. Teachers' Federation president Jinny Sims in Newton-North Delta, a riding that has featured three-way battles between two-term Liberal MP Sukh Dhaliwal, the Conservatives, who finished second in 2008, and the NDP, who lost by just 1,000 votes in 2006.

Outside Metro Vancouver the NDP is pinning efforts on Ronna-Rae Leonard taking Vancouver Island North from Conservative John Duncan, who lost to the NDP in 2006. That's why Harper was in Campbell River this past Saturday in a defensive move to try holding the seat.

The NDP also hope to finally win Esquimalt-Juan de Fuca following the retirement of MP Keith Martin, who held it despite switching allegiance from the Conservatives to the Liberals three elections ago.

NDP candidate Randall Garrison faces off against Conservative Troy DeSouza, who was just 68 votes behind Martin in 2008. Garrison was a close second in 2006 but did not run in the following contest in a riding once held by NDP icon Dave Barrett.

History in the making?

With less than a week to go, what seemed like a lacklustre and unwanted election in March is now one of the most exciting in decades.

And while Ignatieff's Liberals and Duceppe's Bloc will do everything possible in a last desperate effort to block the "orange surge" and Harper's Conservatives hope that tide breaks just the right way for them to win a majority, it's clear that Jack Layton is in an unprecedentedly powerful spot to change Canada's political history.