"I'd put my money on the sun and solar energy. What a source of power! I hope we don't have to wait until oil and coal run out before we tackle that." -- Thomas Edison, 1931 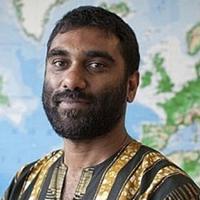 Aided by small-minded extremists, Big Oil has a new argument to defend the shoddy management of Canada's oil sands. It goes like this: Canadian oil is fundamentally ethical compared to the world's worst oil producers.

Saudi oil barons may beat their women and whip foreign workers, but Canada happily employs aboriginals in open pit mines. Nigeria hangs its critics, but Canada just accuses them of being Greenpeace scum. Venezuela censors its media, but Ottawa will bring peace to the planet with the world's most expensive oil. And hey, bitumen has the consistency of peanut butter. It probably tastes good too.

In other words, a $200-billion project developed by the very same corporations that defrauded Nigeria, bloodied the Sudan, vilified climate change science and polluted the Gulf of Mexico has suddenly become a supreme moral force making the world a better place.* Only in Canada can CEOs as narcissistic as Tony Hayward morph into Mother Teresa, and companies as morally compromised as Shell play St Francis. Dig, Canada, dig.

But to swallow this remarkable argument you have suspend common sense, ignore the corruptive influence of oil revenue on governments and enjoy the company of murderers and thieves. Comparing Canada to bloody Sudanese oil producers may make Stephen Harper look angelic, but it doesn't fix the serious ethical challenges that Canada now faces as the largest exporter of oil to the United States.

It's about money, not morals

For starters, oil has never been about ethics. It's always about the money and what economists call the paradox of plenty. While oil companies get rich, oil-exporting nations get poor. Louisiana may be a critical oil producer, but it sports outrageous poverty and some of the worst environmental degradation in the United States. John D. Rockefeller wasn't kidding when he called petroleum "the devil's tears." Moreover, oil discourages if not undermines ethical discussions. Oil money typically funds extremists from the left and right including such charmers as Sarah Palin and Hugo Chavez.

(Oil that is mined with shovels and trucks raises even more ethical challenges. As Mark Twain once quipped, "A mine is a big hole in the ground with a liar on top.")

BP and the China Petrochemical Corp., whose executives could use an instructor like Aristotle or Confucius, haven't invested in the oil sands because of bitumen's snow white character. They've done so because Canadian governments give away water for free, facilitate immensely profitable regimes with low rents and offer friendly regulators armed with rubber stamps more flexible than Gumby. Even the U.S. Government Accountability Office (GAO) reported in 2009 that Alberta gave away more oil profits to oil companies than Alaska or Louisiana.

And if the media were to examine the state of Canada's energy regulators (most are funded by oil companies via levies), they'd find an unethical morass resonant with the corruption in the U.S. offshore oil regulator, the now defunct Mineral Management Services.

What oil does to an exporting nation

All oil exporters, whether authoritarian or democratic, rich or poor, Christian or Muslim, share certain troubling characteristics. They typically don't save the money or collect their fair share of the revenue. They overspend and under-tax. They eschew transparency. They entertain hubris such as becoming "energy super powers." And they increasingly concentrate power into fewer and fewer hands. (Many such as Saudi Arabia and Harper's Tories also don't believe in climate change, a real revenue spoiler.) Oil can also give political parties such as Mexico's PRI and Alberta's Tories long and unhealthy regimes. A province ruled by one party for 40 years is not a maverick; it's simply a dysfunctional state where oil revenue has greased the wheels and hindered democracy.

A decade ago, Stanford political scientist Terry Karl aptly described the character of oil exporting nations in an excellent essay titled "The Perils of the Petro State: Reflections on the Paradox of Plenty." Karl, a student of Venezuela's wasteful oil regimes, wrote that: "Petro states rely on an unsustainable development trajectory fueled by an exhaustible resource -- and the very rents produced by this resource form an implacable barrier to change." As a consequence, oil exporters simply don't behave rationally.

But the cheerful salesmen now calling bitumen "ethical" don't want Canadians to examine these issues, let alone compare the country to responsible oil exporters such as Alaska or Norway. Unlike Canada, Norway had a vigorous debate about its oil wealth. Parties of both the left and right agreed to take oil revenue off the table and save it for future generations. That's why Norway now has a $400-billion pension fund. (Even the Organization for Economic Cooperation and Development has strongly criticized the management of oil wealth in Canada!)

Unlike Canada, Norway's government doesn't run on hydrocarbon revenue but on a national carbon tax. As a consequence, it morally represents its citizens as opposed to North Sea crude. Incredibly, its environment minister doesn't defend oil but advocates for land, water and trees. In contrast, the federal government of Canada has already pissed away $50 billion worth of tax revenue from the oil sands (mostly to lower the GST) while Alberta has saved next to nothing. To date, no Canadian political party wants to talk about these dramatic ethical lapses.

Next comes the regulation of the resource. Having industry fund and administer a third-rate water monitoring program on the Athabasca River with a system of proprietary data is one thing. But when regulators, politicians and lobbyists dismiss, deny and deflect peer reviewed science that consistently documents pollution on the river, Canada has entered Saudi territory. In Canada, petrolistas now deny pollution the same way Saudi society denies any mistreatment of women. In this regard, the poor management of the oil sands has eroded Canada's moral capital around the world.

Next come the economic implications of rapid development. Canada's petro dollar has massacred the country's manufacturing sector and probably accounts for half of the sector's 340,000 job losses in the last six years.

Where's the ethical public policy to deal with this economic fallout? Is it wise to make the country more dependent on a single volatile resource that even the U.S. military, the continent's largest consumer of petroleum, correctly views as an economic security risk?

Last but not least, let's examine the fundamentally tough and ugly character of bitumen, a non-renewable resource. It's not oil floating on sand or fair trade coffee, but a badly degraded asphalt-like junk crude that requires extensive upgrading. If you spread it on toast, you'll lose all your teeth because bituminous sand is four times more abrasive than diamonds. Steaming hydrocarbons out of the ground requires one-fifth of the nation's natural gas supply and billions of dollars in taxpayer subsidies.

Given its unconventional character, bitumen can only be a second line of defence against the depletion of cheap oil. Because it consumes four times more energy and twenty times more capital than light oil, it will never be a sustainable replacement for light crude. Nor is it a recipe for prosperity. The energy returns for every barrel of oil invested in the oil sands is nearly 70 per cent less than conventional petroleum. No civilization can run on junk crude for long without eventually bankrupting the whole damn North American economy. When it takes two tonnes of sand to make one barrel of oil, the world has fundamentally changed.

But petrolistas fear transitions. They also espouse a fairytale faith that promises more energy from dirtier sources with fewer ethical dilemmas. Every North American is now part of this oily scam. We not only believe that we are entitled to more energy, but that we can get fatter and lazier on oil without consequences. The farmer and Christian poet Wendell Berry once noted that "The basic cause of the energy crisis is not scarcity: it is moral ignorance and weakness of character. We don't know how to use energy or what to use it for. And we cannot restrain ourselves. Our time is characterized as much by the abuse and waste of human energy as it is by the abuse and waste of fossil fuel energy."

So whenever a pundit or CEO tells you that bitumen is absolutely ethical, he's really telling to suspend all judgment and shut up. He doesn't want you to ask any pointed questions about the money. Or the need for pension funds. Or the weakness of compromised regulators. Or the ethical pursuit of renewable energy. Or the moral imperative of going on an energy diet. Or $20-billion clean-up liabilities and deformed fish.

To date, no Canadian politician has talked sensibly about the oil sands except for Alberta's former premier, Peter Lougheed. The statesman proposed six ethical standards: Behave like an owner. Slow down. Get our fair share. Save the money. Clean up the mess. And approve only one project at a time.

On this appropriate ethical scale, Norway gets top marks. In contrast, the governments of Canada and Alberta remain at the bottom of a very dirty barrel, a step above the worst but a valley below the best.