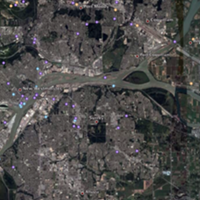 Revenge of the Big 'Burbs

We spent a good chunk of the past decade debating various kinds of representation, especially the STV. Now we're going into another decade with the same old first-past-the-post system that everyone hates. The one thing sure about every election is that a majority of Canadians will have voted against whoever ends up as government.

This predicament arose centuries ago, when people living in a particular region had common interests and needed to defend those interests through a local representative. Rural residents wanted farm subsidies and good roads to their local markets. Urbanites wanted industrial protection and cheap housing.

Now we live in a post-geographical world. Most of us don't know our next-door neighbours, and we rarely vote in municipal elections. We can Skype a friend in Nunavut and read any newspaper in the country on the web. Our real interests are with our scattered families, our professional colleagues, and various voluntary communities.

Yet we continue to vote by geographical blocs: urban, suburban, rural. This sabotages the one-person, one-vote ideal: Rural ridings are always smaller in population than urban ridings, so smaller populations wield more influence than larger ones.

Successful young families migrate to the suburbs while working downtown. So they evade urban taxes and ignore the resulting urban blight. They enjoy suburban comfort and rising property values, while demanding ever-wider freeways for their daily commute. This results in a right-wing lock on the suburbs and a left-wing lock on urban ridings. Left-wingers in the suburbs and conservatives in the city are effectively disfranchised.

As long as we elect our MLAs and MPs on a geographical basis, this system will remain undemocratic and our voter turnout will dwindle with every so-called election. The parties themselves will grow even more rigid and doctrinaire, demanding obedience to the party and its leader as the price for having any influence at all.

But suppose we chose all our representatives "at large," on the basis of the programs they offered us. Suppose we limited the B.C. legislature to just 30 MLAs. And suppose we gave every voter five votes.

Hundreds of candidates could appeal for our votes. We could assign our votes to the five candidates we liked the most, no matter where they (and we) happened to live. Or we could "plump" by giving all five votes to just one candidate.

The 30 candidates who received the most votes would be our new legislature. And each new MLA would cast as many votes in the legislature as he or she had received in the election.

This is very much the way corporations govern themselves, where some shareholders cast the "proxy" votes of other shareholders. Gather enough proxy votes, and you can kick out the board of directors and install a new one.

Under this system, no one would be a "party leader." The MLA with the most votes would be the premier, just as long as he or she could attract enough other vote-rich MLAs to supply a majority. A coalition of low-vote MLAs could still, in theory, frustrate some political glamourpuss who'd won a lot of votes by appealing to a particular interest group.

Now let's suppose that the voters can transfer their votes every six months between elections. A glamourpuss could screw up and see his support bleed to someone else. The low-vote coalition could take a kicking for thwarting the glamourpuss, who would then gain still more power.

This would prevent voter micromanagement of political affairs, while still keeping the politicians on a short leash with fast feedback for their good and bad behaviour. A high-vote political leader couldn't hope for voter amnesia after he was caught lying. Vengeance would be swift.

And when such a leader really had to change course, he or she would have to explain why, just like any employee hired to do a job who wasn't doing it. Give us a good explanation and you keep the job. Give us BS, and you're fired.

Under this system, a Vancouver resident could be the best MLA the Stikine ever had -- if the Vancouverite could appeal to Stikine residents. And a Quesnel resident could fight tooth and nail as Yaletown's advocate, if she showed she understood its needs.

And federally, Vancouverites could vote for Toronto's Olivia Chow or Calgary's Diane Ablonczy. If they got more votes than Jack Layton or Stephen Harper, so be it. A self-righteous New Democrat, a sweet-talking Liberal or an arrogant Conservative would never be more than six months away from the outer darkness.

By turning our present wretched politics into a genuine reality show, we'd ensure huge voter turnouts and a story arc that would grip the nation. Politicians would listen to us, not their deputy ministers. And we would know for sure just what kind of people Canadians really are.