The BC Coroners Service says 619 B.C. residents died during an extreme heat event in June 2021. The report also confirmed which groups were most vulnerable to heat-related illness and death: most of the people who died had one or more chronic health conditions, lived in poverty or were socially isolated.

The service also says there was a lag between the heat alerts issued by Environment and Climate Change Canada and public agencies such as health authorities and municipalities.

British Columbia, Washington and Oregon all experienced record-breaking temperatures from June 25 to July 1, but the heat dome killed many more people in B.C. than in the neighbouring states: Washington recorded 157 deaths, while 107 died in Oregon.

The BC Coroners’ death review panel is recommending wholesale changes to the way B.C. responds to extreme heat events, starting with the establishment of a new heat alert and response system the provincial government has already announced is being implemented.

But critics say the report places too much emphasis on communication and wellness checks, and say there needs to be a funding commitment for things like air conditioners or hotel rooms for people who may not be able to access a cool place in their home or nearby.

“There are no recommendations that create new options for people to escape the heat in 2022 that did not exist in 2021, the year that 619 people died in one week as a result of the heat,” said Gabrielle Peters, a disabled writer who lives in social housing and was a member of the death review panel.

Peters said she found it difficult to participate on the panel because members met in person and were not required to wear masks to protect against COVID-19. She said that while she was offered the chance to participate remotely, tech problems made it hard to communicate. In the end, she said, none of her recommendations were adopted and she asked that her name be removed from the finished report.

The BC Coroners Service said Peter’s participation in the panel was appreciated and “reflects much of the information and recommendations Gabrielle provided.”*

Adam Olsen, a Green Party MLA, said the government’s response so far has been inadequate.

“Telling British Columbians to purchase air conditioners, heat pumps, thermal blinds, fans and digital thermometers is out of touch with the cost of living in this province,” he said. “The BC NDP haven’t offered programs to assist low-income and vulnerable people to purchase these tools, nor developed a co-ordinated plan to get low-mobility people to cooling centres.”

The report authors’ recommendations include calling for new procedures to be adopted for checking on vulnerable people. By June 30, the panel is calling on provincial health authorities to ensure that home and community care services identify and prioritize clients who need to have home visits and regular contact during an extreme heat emergency.

The panel is also calling for the Union of BC Municipalities to consider how to put community wellness checks in place.

Another recommendation is to review issuing “cooling devices” such as fans as “medical equipment” to people at risk of dying during an extreme heat event — but the deadline on that recommendation is Dec. 1, which means it won’t come into effect in time for this summer.

Longer-term recommendations target changes to the building codes and rebates to help with the cost of installing air conditioning in homes.

The report highlights that 67 per cent of the people who died were over the age of 70 and almost all were injured while they were inside their homes, where temperatures can build up over the course of the day.

But the urban environment people live in also plays a big part: people who lived near busy roads in high-density neighbourhoods with large buildings and fewer trees were more likely to die during the heat dome. Cities need to find ways to increase green space and shading to provide “naturally cooler areas where people can find respite from extreme heat events,” according to the report. 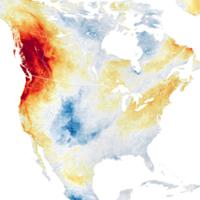 Inside June’s Deadly Heat Dome. And Surviving the Next One

The report authors say two of the most impactful interventions during future extreme heat events will be to make sure people have a way to keep cool inside their home or a nearby location like an air-conditioned building lobby, and to conduct “heat-informed” checks on vulnerable people.

Dr. Taj Baidwan, chief medical officer for the BC Coroners Service, said the details of cooling centres or other options will largely be left up to local governments to handle, but the death review panel hoped to offer a “road map.”

“We offered the opinion that local communities know best how to do this,” Baidwan said. “And what you’ve got to do is marry up resource and wealth of knowledge that exists at local level to make sure you create the right effect in every community.”

* Story updated on June 7 at 3:28 p.m. to include additional comment from the BC Coroners Service.