Five years after B.C. declared a public health emergency, toxic drugs are killing more people than ever before.

The BC Coroners Service reported today that 201 people died in October, the most ever recorded in a single month.

This brought 2021’s total number of deaths to 1,782. Last year had previously been B.C.’s deadliest year on record, with 1,765 people lost to toxic drugs.

The province’s per capita death rate is now 41.2 per 100,000 people, double what it was in 2016 when the public health emergency was declared, and nearly eight times what it was when documentation of toxic drug deaths began in 1995.

The death, grief and pain for 201 more families and communities is yet another reminder of government apathy towards the lives of people who use drugs, advocates and experts say.

“It’s hard to describe the feeling, because it’s shocking but it’s expected,” said Leslie McBain, co-founder of drug policy advocacy and grief support group Moms Stop the Harm. “Why would the number of deaths go down if nothing different is being done?”

As deaths have surged the provincial government has promised to decriminalize personal possession of drugs, provide more pharmaceutical alternatives to street drugs and expand treatment and recovery options.

It has succeeded with some small pilot projects and clinics providing prescription versions of illicit drugs, known as safe supply, to separate people from the toxic drug supply.

But Downtown Eastside advocate and City of Vancouver drug policy advisor Karen Ward said none of these strategies will curb deaths without widespread, barrier-free safe supply.

“They’re so determined to not change the system that they’re going to let thousands of people die.”

The drug supply in B.C. has become increasingly toxic, volatile and unpredictable as pandemic measures tightened the border and brought more potent and dangerous combinations of drugs.

That has included an increased presence of benzodiazepines, a group of nervous system depressants often used to treat conditions like anxiety and insomnia. When combined with opioids, benzodiazepines are more likely to cause a fatal overdose.

Drug user advocate Dean Wilson, who is the peer lead at the BC Centre on Substance Use, said the new combinations mean “we’re losing the people who are close to being stabilized on opioids.”

And fentanyl is now contributing to 84 per cent of deaths, up from just five per cent in 2012.

These new mixtures make it difficult for anyone, whether a frequent or casual substance user, to know how much and what exactly they are taking.

“Those 201 people who died last month were not idiots,” said Wilson. “They didn’t want to die. It’s just uncontrollable if you don’t know what you’re taking, and the benzos make it really hard to bring people back once they’ve overdosed.”

Ward and McBain consider the horrific rise in deaths a policy choice on the government’s part. It’s clear that providing safer supplies of substances will save the most lives, they say.

“This is predictable, and preventable, and they chose otherwise,” Ward said.

“It seems the government is OK with letting hundreds of people die while they work on safe supply,” added McBain.

The vast majority of people dying are men aged 30 to 59, according to the report, with Vancouver, Victoria and Surrey recording the most deaths.

But no community has been spared by the toxic drug supply. Vancouver Coastal Health has the highest per capita number of deaths at 47.6 per 100,000, while the Interior and Northern regions have 45 and 44.8, respectively.

And deaths are likely accelerating among those most affected by poisoned drugs, including poor, racialized and disabled people. 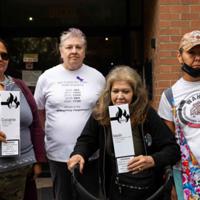 BC’s Overdose Failure: ‘Each One of these Deaths Was Preventable’

Ward and McBain agree that while some people may hope today’s report is a wake-up call, the provincial government won’t change course despite the soaring deaths.

Only public attention and outrage might change political decisions not to pursue evidence-based solutions, Ward said.

In her work advocating for change and educating families and the public about drug policy and substance use, McBain finds sadness and glimmers of hope. She lost her son, Jordan Miller, to a toxic drug overdose in 2014 when he was 25 years old.

“We who have lost our children, our main goal is to not lose any more.”