An atmospheric river that swept through southern B.C. last weekend dumped a month’s worth of rainfall over just a few days. Flooding and washouts destroyed parts of major highways, halting trucking routes out of the Lower Mainland.

Catastrophic flooding led to the evacuation of Merritt and parts of Abbotsford, including an area of farmland that produces much of the province’s eggs, chicken and milk.

But bare grocery store shelves have been caused by panic buying, not an actual shortage of food, and B.C.’s food system is relatively resilient, say experts.

Still, the loss of so much livestock and trucking disruptions will leave a hole in the production of food that governments, farmers and distributors will have to work to close as winter approaches.

Here’s how the flooding has affected food production and distribution in B.C., and what we need to think about in the future as natural disasters become more frequent because of climate change.

Abbotsford produces 50 per cent of the eggs, chicken and milk that B.C. residents consume, Mayor Henry Braun told media during an evening press conference on Tuesday.

That night, Braun issued a dire warning to farmers who were holding out on the Sumas Prairie to leave immediately. A pumping station was at risk of failing, meaning flood water could have risen very quickly.

The pumping station was saved through the work of volunteers throughout the night, but farmers have lost cattle, chickens and other livestock to the rising floodwaters.

“Sadly, farmers had to walk away from barns full of animals knowing that they either perished or they will,” B.C. Agriculture Minister Lana Popham told The Tyee.

Other farms in the Fraser Valley are surrounded by water, and a coalition of agencies have been working to deliver animal feed and water to the farms that are in the direst need, Popham said.

Some farms on Vancouver Island have also been affected by flooding.

This is the second climate change-related natural disaster to hit farmers in B.C. this year. During an unprecedented heat wave in late June, farmers in the Fraser Valley also lost chickens.

At a conference this fall, some farmers spoke about how they planned to install heat pumps to cool their barns in the summer, Popham said.

Farmers will be eligible for disaster relief funding and other government help, Popham said, adding she’s been meeting with farmers and industry groups throughout the crisis.

Eggs, dairy and poultry are all part of Canada’s supply management system, a national system that controls the supply of certain key food products.

“We produce a certain amount of the demand for milk and eggs and poultry,” Popham explained. “And so, because we’re part of the national supply management system, we will be able to access supplies from other provinces.”

Popham said the panic buying and food hoarding that’s happening even in communities that are not directly affected by the flooding puts stress on the food system.

Consumers need to know that eggs, milk and poultry can and will be brought in from other regions.

“It certainly makes it worse when people are over-shopping, because the system just can’t adjust to that,” Popham said.

Popham said it’s not yet clear whether the farmland that is currently under water will be able to be used to grow crops in the spring.

“We’re going to need every farmer on board as we head into a fairly precarious situation as far as food production goes in the New Year,” Popham said.

Flooding swept away parts of the Coquihalla, a major highway and trucking route that stretches across British Columbia. When Highway 3, another route across southern B.C., was also closed, the densely populated Lower Mainland was cut off from the rest of B.C.

Grocery stores as far away as Prince George — a town that was not directly affected by flooding — have been emptied by shoppers who are nervous about running out of food. But for the most part, that anxiety is misplaced, say retail and food security experts.

There are a few communities, like Hope, that have been completely isolated by the storm damage and need emergency supplies brought in. But while having rail and road links severed is a headache, most cities and towns in B.C. aren’t going to see much of a disruption when it comes to food.

Metro Vancouver is home to large grocery distribution hubs and can receive food shipments from the United States by road or by ship through the Port of Vancouver. And communities east of Hope are still connected by road to cities in Alberta and beyond.

“If you have your distribution centre in Kamloops to your stores in the Interior, you’re good,” said Greg Wilson, director of government relations with the Retail Council of Canada.

“If you have distribution centres in the Lower Mainland, you can’t fulfill orders to stores in the Interior. But they adjusted, and so what they’ve done is they’ve found suppliers in other parts of British Columbia, in Washington state, in Alberta.”

Many B.C. trucks are currently being routed through Washington state.

James Vercammen, a professor in UBC’s faculty of land and food systems, said the dairy, egg and poultry supply is going to be the most affected. Vegetables are grown locally in greenhouses or are shipped from the United States or Mexico at this time of year. Dry goods like pasta and canned food are held in large warehouses.

“We’re good for a while,” Vercammen said. “Trucks will get through, and trains will eventually get through.”

In fact, there may an over-supply of some food items in the Vancouver area right now. Arielle Lok, the co-founder of a company called Peko Produce that resells food that would have otherwise been thrown away, said she’s heard from food brokers that there is a more than usual amount of fresh fruit and vegetables available for her company to pick up.

Vercammen and Wilson said the biggest pressure on the food system right now is panic buying, which is putting unnecessary stress on the availability of food. It’s the same kind of consumer behaviour that happened at the start of the COVID-19 pandemic, when shoppers bought a month’s worth of toilet paper.

Vercammen said shoppers need to think about the pressures they’re putting on the food system when they hoard food — it means a neighbour may have to go without. He suggested that British Columbians buy only what they need right now, especially when it comes to dairy and eggs. 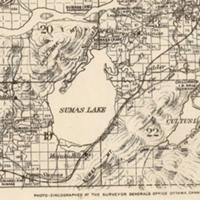 Mapping the Flood in Abbotsford

Wilson said he understands why people were worried when they saw photos and videos of the storm damage on media and social media. Widely shared images of empty shelves without a lot of context also didn’t help.

When natural disasters happen, Wilson said he’d like to see better communication from both politicians and the media about the supply of essential items.

During a press conference Thursday, Solicitor General Mike Farnworth said the government is considering orders under the province’s state of emergency to prevent hoarding and price gouging.

While grocery stores are going to be able to restock their shelves, Wilson acknowledged the broken transport routes are a huge headache for retailers.

Popham said farmers across the province are also affected by the transportation issues as they try to get their perishable goods to market.

“We’re definitely under a time crunch to get that figured out,” she said.