After a big jump in child COVID-19 cases following the return to school, British Columbia is now seeing a sharp decline in cases among kids, public health officials said today.

“As case rates are coming down across the board, we have also seen, thankfully, a dramatic drop among school-aged children,” said provincial health officer Dr. Bonnie Henry.

The encouraging trend is most pronounced in the Interior and North, where many communities have lower vaccine coverage and have therefore shouldered most of the burden of the province’s fourth pandemic wave.

However, unvaccinated children and infants continue to be at risk of severe illness and hospitalization. Four children under the age of four were admitted to hospital in the last week due to COVID-19, Henry said.

Henry said most cases among children involved transmission outside schools.

But clusters of two or more cases have affected about one-third of the province’s nearly 2,000 public and private schools.

Interior Health was the hardest hit, with 80 clusters affecting 46 schools. The clusters were linked to 314 of the region’s 1,123 cases in the first five weeks of the school year.

Henry said the median cluster size is around three cases, up from the median of two cases in school clusters last year.

This change likely reflects the increased transmissibility of the Delta variant, which accounts for more than 98 per cent of cases in B.C.

The school situation is “about the same as what we saw last year and there is slightly increased transmission, but it is mostly controlled,” said Henry.

B.C. is awaiting Health Canada approval to vaccinate children five to 11 with a dose about one-third of the amount used for adults. Pfizer-BioNTech submitted its official application package to have the vaccine approved for children this week.

But Henry said the province continues to have high case counts and strained hospitals, particularly in the North, where 65 patients in critical care, most for COVID-19, have been transferred to hospitals elsewhere in the province.

Health Minister Adrian Dix said the 16 per cent of people in B.C. who are eligible but unvaccinated make up 88 per cent of patients in critical care. Unvaccinated people are 40 times as likely to require hospitalization compared to people with both shots.

“That continues to test our health-care system everywhere,” said Dix. 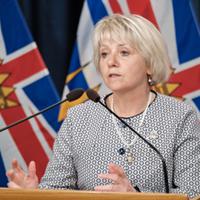 BC Sees ‘Concerning’ Surge in COVID Cases Among School-Aged Kids

That strain could intensify as the province’s vaccine mandate for health-care workers takes effect next Tuesday. Currently, about 96 per cent of staff are vaccinated across the province, with Interior Health lagging at 93 per cent and Fraser Health leading with 98 per cent. The remaining staff could be placed on unpaid leave or terminated should they choose not to get a single dose before next week.

Despite pressures on the system, Henry announced the province will increase indoor capacity limits on concerts, indoor events like weddings, sports events and arts performances from 50 to 100 per cent on Monday, one day after the vaccine card program requires all who access these venues to be fully vaccinated.

The change will apply across the province, except in areas where regional restrictions are in place in parts of the North, Interior and eastern Fraser Valley.

This move is not without risk, Henry said, but noted that with the requirement for full vaccination the risks decrease drastically.

Henry and Dix encouraged people to get their shot and follow the rules if they haven’t yet.

“With what we are seeing, this is not the time to game the system,” Henry said.