COVID-19 cases among school-aged children and teens have risen dramatically since schools reopened, new provincial modelling shows, particularly in regions of British Columbia where the adult vaccination rate is low.

Youth ages 12 to 17, who are eligible to be vaccinated, saw a temporary modest increase to about 15 per 100,000 after classes resumed. It had dropped back down to 12 as of last week.

In the last week, 1,086 children under 17 have been diagnosed with COVID-19, and five have been hospitalized.

Cases in all other age groups have declined or stabilized between five and 15 cases per 100,000 in the same time frame.

“We have seen an increase in numbers of children diagnosed in the past week compared to what we’ve seen over the course of the pandemic,” said provincial health officer Dr. Bonnie Henry today. “It is a concerning trend.”

The trend is most pronounced among children under 12 who cannot yet be vaccinated. Pfizer clinical trial data submitted to Health Canada shows strong protection for children five to 11 after two shots of a lower dosage of vaccine, which could mean children can begin to be vaccinated in the coming months.

Several organizations representing teachers, parents and school staff have called on the province to do more to protect students and staff, including making masks mandatory for all students, not just grades 4 to 12.

Henry said the province will continue to monitor whether cases are leading to higher hospitalization numbers or serious illness among students.

But the best protection is to vaccinate all eligible adults, students and parents in the school community, she said.

The rising rates among children and teens are particularly a concern in parts of the Northern and Interior Health regions, where adult vaccination rates lag behind other parts of the province like Vancouver Coastal Health.

“That tells us the rates we’re seeing in school-aged children are reflected in the rate of vaccination we’re seeing in the community,” said Henry. “The best way to stop COVID from getting into our schools is for everyone to be vaccinated.”

Data from the BC Centre for Disease Control presented today shows that across all age groups, all vaccine combinations provide more than 90-per-cent protection against serious illness and death.

As of Sunday, 87.7 per cent of all eligible British Columbians have had at least one vaccine dose, and 80.5 per cent have had two. 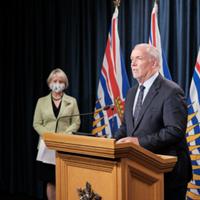 Starting Monday, Some Doors Will Close for Unvaccinated People

But in regions like the eastern Fraser Valley and the North, where hospitals have been flooded with unvaccinated COVID-19 patients, vaccination rates among adults under 50 lag behind the Lower Mainland by as much as 20 per cent.

Across the province, people have until Oct. 26 to provide proof of two vaccine doses to enter restaurants, sporting events, gyms and indoor events like weddings and concerts.

But that will be required immediately in Fraser Valley East, Henry said, to encourage vaccination.

Henry previously ordered increased preventive measures in the Interior and the North.

“The message is get vaccinated,” said Health Minister Adrian Dix.

B.C. will also begin offering residents of long-term care and assisted living facilities third booster doses of vaccines six months after their second dose to curb the spread that has continued in facilities, largely caused by unvaccinated visitors and staff.