The British Columbia government and BC Hydro are taking steps to encourage people to switch from fossil fuels to electricity, but not at a large enough scale for the province to meet its greenhouse gas emission reduction commitments.

“While we are pleased to see BC Hydro’s electrification plan introduce new incentives for homeowners to switch to heat pumps, this plan fails to outline how BC Hydro will do its part to ensure that the province meets its legislated climate targets,” said Dylan Heerema, senior policy advisor for Ecotrust Canada, an environmental charity.

This week, the government and BC Hydro announced a $260-million plan over five years that includes more rebates for heat pumps, adding 227 charging stations for electric vehicles and encouraging more clean businesses to come to the province.

“From heat waves to wildfires, the devastating effects of climate change are all around us,” Premier John Horgan said in making the announcement. “The scale of the climate crisis is enormous, and that requires more activity by government.”

Horgan noted that 98 per cent of the province’s electricity comes from clean, renewable sources, including hydro power.

But at the same time, three-quarters of the total energy used in the province — particularly for transportation and heating — still depends on burning fossil fuels.

Horgan said once the plan is in place and people use more electricity instead of fossil fuels, it will reduce the province’s greenhouse gas emissions by 930,000 tonnes per year, the equivalent of getting 200,000 cars off the road.

But Heerema at Ecotrust said that even if the plan succeeds, it amounts to just 1.3 per cent of B.C.’s total emissions.

“The utility is still planning for a future where B.C. fails to meet its targets,” he said. “To achieve its own goals, the province needs to hold utilities to account on this matter, and that starts with bringing the BC Utilities Commission’s mandate into the 21st century.”

Ecotrust and other groups have been encouraging the B.C. government to overhaul the commission that regulates BC Hydro and other utilities so that it can better support a transition to cleaner energy and other provincial goals.

The BCUC’s mandate is to keep rates as low as possible and try to maximize the economic efficiency of the utilities’ operations across all of the ratepayers, which at times puts it at odds with the government’s other objectives, Heerema said.

“There’s this growing disconnect between what the B.C. government is stating its goals are on emissions and the plans that utilities have as far as forecasting their demand for clean electrification going forward,” he said.

The new plan “didn’t fix that in any way.”

Horgan told The Tyee that while the BCUC process can pose a challenge for programs like electrification, the regulator’s role protecting ratepayers is important. 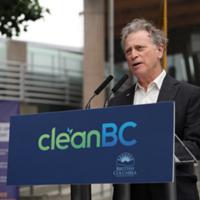 “We do need to keep rates down,” he said. “This program as it’s been constructed will keep rates down, the utilities commission will see that, and if there’s an opportunity for improvement I’m sure they’ll make those suggestions.”

A spokesperson for the Ministry of Energy, Mines and Low Carbon Innovation said in an email that the Clean Energy Act provides an exemption from the BCUC process for utilities introducing projects and programs aimed at reducing greenhouse gas emissions.

In 2018 the government announced the CleanBC plan that identified measures it said would get the province 75 per cent of the way to its target of a 40-per-cent reduction in greenhouse-gas emissions by 2030, based on a 2007 starting point.

The government is expected to release an updated climate plan soon, likely before the international COP26 conference in November, that should show how it will close the gap and reach the target.

“I don’t see a credible way to do that unless the government and Hydro are going to take a more active role in doing a much more significant amount of fuel switching,” Heerema said. “We really need the province to hold utilities to account as well and to not continue to plan for a future where we don’t meet our targets.”