The B.C. government is extending a crisis fund program that in the last three years has helped more than 11,000 households pay their BC Hydro bills and avoid having their electricity service cut off.

“We recognize there will be times when people may need some financial assistance to catch up on their hydro bill,” Energy, Mines and Low Carbon Innovation Minister Bruce Ralston is quoted saying in a press release scheduled for release today. “As many families struggle to recover from the impacts and stresses of the COVID-19 pandemic, that time is now.”

Under BC Hydro’s Customer Crisis Fund program, which started in 2018 as a three-year pilot project, a household facing disconnection can apply for a grant of up to $600 if they can’t pay their bill due to a temporary financial crisis such as a job loss, unexpected medical expense or death in the family.

Six weeks ago, the British Columbia Utilities Commission ruled the crisis fund should end since it didn’t save the utility money and therefore didn’t benefit all ratepayers.

In May, Ralston told The Tyee that the government would make sure the crisis fund continued and was looking at options for how to proceed.

The province is now directing the BCUC to allow the government-owned utility to keep issuing grants under the program. Funding is coming from the surplus $5.9 million that BC Hydro collected from ratepayers for the program but did not yet spend on grants.

At the start of the program, BC Hydro charged all customers 25 cents a month, an amount later reduced to 13 cents. As of June 1, BC Hydro is no longer charging customers to fund the program.

A spokesperson said the direction to the BCUC allows up to $5 million to be spent on the program, an amount that should last at least two years based on the current spending. During that time the government plans to work with stakeholders to design a permanent replacement for the crisis fund. 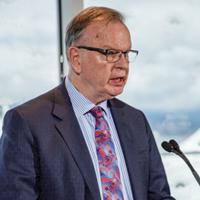 The government’s announcement quotes Leigha Worth, the executive director and senior counsel for the BC Public Interest Advocacy Centre, supporting the crisis fund’s extension. “I am pleased that the province has followed through on its recent promise to step in by temporarily reviving BC Hydro’s CCF program while it decides how best to address energy affordability going forward,” she said.

The centre and six other groups last week sent a letter to Ralston and George Heyman, the minister of environment and climate change strategy, encouraging them to review the British Columbia Utilities Commission’s role ahead of BC Hydro planning processes in 2022.

“This group is concerned that the current mandate of the BC Utilities Commission... is limited in its scope to such an extent that it does not enable the commission to adequately consider B.C.’s energy, climate and equity objectives,” they wrote.

“Given appropriate enabling legislation and direction, the commission could be playing a leading role in enabling the transition toward a low-carbon, affordable and equitable energy system.”