Advocacy groups are encouraging the British Columbia government to overhaul the commission that regulates BC Hydro and other utilities so that it can better support a transition to cleaner energy and other provincial goals.

With processes coming early next year that will determine energy policy for years into the future, widening the B.C. Utilities Commission’s mandate needs to happen soon, the seven groups say.

“The BCUC now makes its decisions in largely the same way it has since its inception,” said Dylan Heerema, the policy and research lead on community energy for one of the groups, Ecotrust Canada. “It tries to keep rates as low as possible and tries to maximize the economic efficiency of the utilities’ operations across all of the ratepayers.”

That mandate made sense 50 years ago amid concerns that utilities would take advantage of their monopolies to make rates unfairly high, he said, but now that economic lens has become a “significant barrier” to needed change.

Ecotrust and the other groups sent a June 17 letter to B.C. Energy, Mines and Low Carbon Innovation Minister Bruce Ralston and Environment and Climate Change Strategy Minister George Heyman. In it they argued changes need to be made before 2022 when the BCUC will consider BC Hydro’s Integrated Resource Plan as well as the utility’s Rate Design Application.

The IRP is a 20-year-plan for how much demand the utility expects for electricity and where the power will come from to satisfy that demand. The RDA is BC Hydro’s plan for how to structure residential electricity rates and could include a switch from the current two-tier system that charges households a higher rate after they’ve used a base amount.

“These proceedings will determine how B.C.’s largest utility plans for future demand and electrification of the economy, how electricity will be priced, and what support will be offered to households facing unaffordable energy bills,” the groups said.

“Future proceedings will also determine whether a meaningful signal is sent to B.C.’s utilities that the use of fossil fuels like natural gas must begin a phase-out if the Province is to make good on its legislated climate commitments and sectoral targets.”

The groups are “concerned that the current mandate of the B.C. Utilities Commission... is currently limited in its scope to such an extent that it does not enable the Commission to adequately consider B.C’s energy, climate and equity objectives in these upcoming proceedings,” they said.

Nor could it take into consideration the goal of advancing reconciliation with Indigenous communities wanting autonomy as they build and transform their energy systems.

“As B.C. looks toward a clean energy future, we urge you to consider the critical role that the Commission will play, either in accelerating or holding back, the energy transition and energy justice we need to protect the public interest and British Columbians’ futures.”

Minister Ralston was unavailable for an interview.

“We are currently reviewing the letter that the organizations have sent and appreciate their interest and advocacy in support of BC’s electrification, climate, and equity goals,” Ralston said in an emailed statement.

“Government is grappling with these very issues as part of the BC Hydro Comprehensive Review and plans to release further actions and next steps from that process in the near future,” he said. “We also recently provided direction to the BCUC to approve a discounted electricity rate to encourage fuel-switching and attract new clean industries like green hydrogen, as well as to ensure continuation of the Customer Crisis Fund.”

The Environment Ministry referred questions to the Energy Ministry.

Heerema said the limitations of the BCUC were recently on public display when it ruled against BC Hydro continuing the Customer Crisis Fund that provided grants of up to $600 to households facing disconnection when they couldn’t pay their bill due to a temporary financial crisis such as a job loss, unexpected medical expense or death in the family. 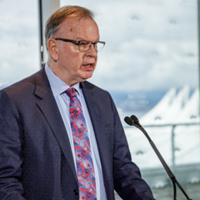 While the government can make directions to the BCUC, as it did with the crisis fund, he said, “It’s a very inefficient way of doing things and things do slip through.”

Aligning the BCUC’s mandate with the government’s goals would make much more sense, he said, noting the commission continues to approve new natural gas infrastructure and a rate structure for residential electricity that penalizes households that might use it for heating or to power an electric vehicle.

“Their definition of public interest doesn’t really include meeting our climate targets,” he said.

Or as the groups put it in their letter, “Given appropriate enabling legislation and direction, the Commission could be playing a leading role in enabling the transition toward a low-carbon, affordable and equitable energy system.”