RCMP ramped up enforcement of a court injunction against Trans Mountain pipeline protesters in Burnaby Wednesday, arresting a tree-sitter who was occupying a “skypod” — a hammock-tent strapped to a tree 15 metres above the ground.

Bill Winder, a 69-year-old retiree and climate activist, was arrested and charged with contempt of court after being extracted by what activists call “the tank,” a large vehicle with a cherry-picker on top.

Winder says the threat of climate change made his action worth the risk. This summer, the UN Intergovernmental Panel on Climate Change said fossil fuels are to blame for global warming, calling the situation code red for humanity.

“The United Nations says this is code red,” said Winder. “Code red means you do something.”

Nestled across from the bustling Trans Canada highway, Winder and fellow activists have established a series of tree-sits in the way of the Trans Mountain expansion project, which would triple the capacity of the pipeline that ships oilsands crude from Alberta to B.C.

The protesters have been occupying pipeline worksites for more than a year, in an attempt to block construction. Two main tree-sits remain in the area, connected with a network of ropes and ladders, but activists expect more RCMP enforcement in the days to come.

“I believe that the [government was] waiting until the election was over,” said protest supporter Susan Weber, as Trans Mountain workers cut surrounding trees with chainsaws.

The old-growth forest blockades at Fairy Creek on Vancouver Island have become the largest act of civil disobedience in Canada’s history, attracting much media and activist attention.

But as construction on the Trans Mountain pipeline expansion continues to inch towards the Burrard Inlet, the battle for the trees may soon have a new frontline.

Work crews for the company are currently tunnelling through Burnaby Mountain and drilling beneath the Fraser River.

Wednesday’s enforcement was carried out by 14 RCMP officers, said RCMP, including four officers in militarized gear similar to gear worn by RCMP at Fairy Creek and at the raids on Wet’suwet’en territory.*

Trans Mountain workers have erected blue fences that block media and public access from the site surrounding the tree-sits. The Tyee was refused entry to the fenced area by Trans Mountain personnel.

The RCMP did not respond to the Tyee’s request for comment by publication time. 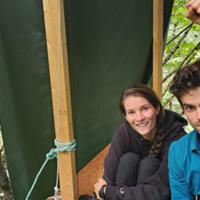 Tree-Sit Protesters Say TMX Is Putting Them at Risk

This is the second time RCMP have taken action on the tree-sitters in the past year. Their first tree-sit established in nearby Holmes Creek was raided by the RCMP last December, spurring the current protest site at Lost Creek, which is now being targeted.

The current tree-sits are situated in the Brunette River Conservation Area, and construction will take place surrounding a tributary to the Brunette River, which has recently seen a return of salmon after their disappearance from the region in the 1970s.

A media liaison for the tree-sitters, Rod Mariner, noted that the Canada Energy Regulator bars Trans Mountain from disturbing the area after Sept. 15 to protect fish habitat.

On Wednesday morning, Mariner reported watching the “tank” get stuck in a tributary in its attempts to extract protesters.

“They’re not supposed to be in any riparian zones in this area,” he said. “They’re constantly breaking their own laws, and that’s why we’re here.”

* Story updated on Sept. 23 at 11:46 a.m. to reflect the number of officers present at the action, according to the RCMP.