After a year and a half of COVID-19, increasingly toxic drugs and resurfaced trauma, Indigenous-led organizations in the Downtown Eastside say they need a healing centre to help people reconnect with their culture and heal from the intergenerational impacts of racist colonial policies.

The grassroots groups have stepped up to provide life-saving services through the pandemic. They’ve created food distribution hubs, have offered community and cultural connections and provided supervised drug consumption sites.

Then, on top of the challenges and isolation people were already going through, news broke this May of 215 unmarked graves found at the former Kamloops Indian Residential School by ground-penetrating radar. Tracy Draper said the effect on people who live in the Downtown Eastside was immediate and devastating.

“It was like a bomb went off. Everybody scattered and disappeared,” said Draper, the program co-ordinator for Western Aboriginal Harm Reduction Society and a member of the Peepeekisis Cree Nation. The society supports Indigenous people who use drugs, and Draper said pain from the news about residential schools led many members to seek substances and use more of them.

Not everyone made it out of that darkness alive. The unregulated drug supply in Canada is heavily tainted by fentanyl and other dangerous additives, and British Columbia has the highest rate of death from overdoses in the country.

“Whenever you're using medicine, it's dangerous,” Draper said. “So yes, we did lose a couple of people.”

For decades, the Downtown Eastside has been home to many Indigenous people in Vancouver: 8.5 per cent of the people who live in the local health area that includes the Downtown Eastside, Chinatown and Strathcona are Indigenous, compared to two per cent in Vancouver and 4.8 per cent in British Columbia. Many residents are dealing with the effects of intergenerational trauma rooted in racist colonial policies and institutions like residential school — policies that were designed to separate Indigenous people from their languages, cultures and families.

“The reason why our people are here is because a lot of us have lost our heritage. A lot of us are scooped down here, a lot of us have been residential schooled, Indian hospitaled or day schooled,” Draper said, referring to institutions that separated people from their families and communities and the '60s Scoop, when children were frequently removed from their families by the state and adopted by non-Indigenous families. Indigenous children continue to be over-represented in the foster care system.

“And we have lost touch with our people,” Draper said.

The harm reduction society operates out of a few offices in a building occupied by the Vancouver Area Network of Drug Users on East Hastings Street. Members can access a society-run overdose prevention site, and the organization also offers healing circles, one-on-one support with an Elder and Cree classes.

Chris Livingstone is the founder of the society, but now runs a separate organization called Smoke Signals out of a small storefront on Powell Street. Inside the space, phones, computers and directories are available to help people make connections with family members who live in other parts of the province or the country. On Wednesdays and Thursdays, it’s transformed into a food distribution hub, with 22,000 bags of groceries going out the door in one year alone.

Outreach teams from Western Aboriginal Harm Reduction Society and Smoke Signals also fan out through the neighbourhood to connect with people.

“Addiction is isolation and disconnection,” Livingstone said. “What we do is we try to counter those feelings with connection.”

“The residential schools and everything that occurred in our lives here in Canada is a consequence of genocide,” said Micheal Lascelles, the executive director of Aboriginal Front Door.

Before the pandemic, Aboriginal Front Door provided a safe space for people “to be with your own people where you don't have to explain yourself,” Lascelles said.

Because of COVID-19 precautions, the organization still can’t let people into its small storefront space on Main Street, but has been serving food and coffee to around 200 people a day. Aboriginal Front Door also offers smudging with cedar, sage, sweetgrass and tobacco, and has also prepared a “digital medicine bundle” — a video of Elders being interviewed and telling cultural stories and traditions.

“If the patrons are having a bad day, our Elders, the ones who survived residential school and work here, they take a walk with that individual,” Lascelles said. “They pray with them and talk with them.”

Livingstone said he knows what it’s like to “disappear” in the Downtown Eastside from a period using crack cocaine in the early 2000s. “It didn't matter who was driving by or out in this world. It's kind of like being separated.”

Getting connected to VANDU and working on the campaign to open Insite, Canada’s first safe injection site, helped counter the dislocation. 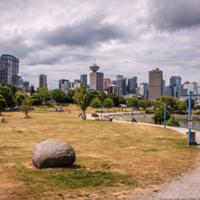 Will an Indigenous Healing Centre Finally Find a Home on Vancouver’s Waterfront?

But so did reconnecting with the Nisga’a side of his family. Raised by his father in the Kootenays, Livingstone said he didn’t even know what he was missing until he started meeting his mother’s side of the family and learning about Nisga’a cultural teachings.

Draper and Livingstone say there’s a huge need for a dedicated wellness or healing centre, where Indigenous-led organizations could offer cultural connections and healing for people who have become disconnected from their cultures and families.

“This centre would be a place where you could learn about your heritage, get a traditional name, learn the traditional ways and feel like a part of your own community again,” Draper said. 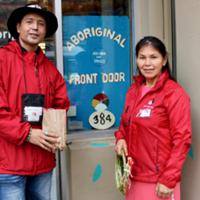 “That is the most important thing if you talk to a lot of Indigenous people.”

While Livingstone is hoping a healing centre will eventually be built at Crab Park, Draper says she’s lost patience with that idea because it requires the Port of Vancouver, which owns the land, to agree. She thinks finding a space as close to Main and Hastings as possible would be ideal for reaching the most vulnerable people in the neighbourhood.

Draper pictures a space that could host ceremonies and gatherings like powwows, but would be low-barrier, so people who are still using drugs could attend.

“But especially if they're using medicines to heal their pains, we understand that, we welcome you, we want you to come and feel a part of it. That's what it's all about. It's all about connection.”