The idea was first floated in 2000, but in two decades an Indigenous healing and cultural centre for Vancouver’s waterfront Crab Park has never gotten off the ground.

Now, after yet another city park board motion, work may begin on developing a plan for the centre, figuring how much it will cost and finding funding for the major project.

John Irwin, a COPE park board commissioner, drafted the motion in an attempt to get the centre included in the park board’s capital spending plan.

Crab Park sits on land leased from the Vancouver Fraser Port Authority. The park was created in the 1980s after years of protest and advocacy from Downtown Eastside community members.

Irwin’s motion, which was passed unanimously at a meeting this week, calls for parks staff to ask the port authority if a cultural healing centre could be permitted on the park site. If the authority says yes, the motion calls for park board staff to work with the City of Vancouver to request funding in the 2022-2025 capital budget.

The motion also calls for staff to work with the Musqueam, Squamish and Tsleil-Waututh First Nations to determine how they would like to be involved in the project.

The centre, advocates say, would help Indigenous people deal with physical and mental health challenges and be a step toward reconciliation.

Irwin said a previous city council motion in 2018 and a park board motion in 2019 both called for work to start on planning the centre, but those efforts stalled.

Part of the problem, Irwin believes, is that the 2019 park board motion suggested expanding Crab Park to include a little-used parking lot to the west of the park, an idea the port has firmly resisted.

Irwin said that in the wake of the discovery of hundreds of unmarked children’s graves at residential schools across the country, there is new urgency to get the Indigenous healing centre built at Crab Park.

“Reconciliation can’t just be words and signs,” Irwin said. “It also needs to be action.”

There’s also a lot of dissatisfaction in the community over the port’s nearby Centerm terminal expansion, which has blocked part of the waterfront view from the park. 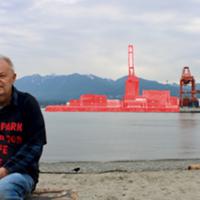 ‘We Are Losing It as We Speak,’ Say Crab Park Advocates

The port has promised $1 million to improve Crab Park, but park advocates note the park is currently in a state of disrepair. The field house was condemned months ago and sits empty and fenced off, and the temporary toilets put in to replace the bathrooms in the field house are frequently dirty and offer little privacy.

In February, the Union of BC Indian Chiefs called for action on improving Crab Park and establishing an Indigenous healing lodge.

The UBCIC called Crab Park “a sacred site of great spiritual and cultural significance for Indigenous peoples that serves as a safe haven for those who are disproportionately impacted by homelessness and impoverishment.”